The Giant Tarantulas - A Fifties Kaiju Monster Menace For Cepheus Atom & the Barbaric! rpg Adapted From 'The Tarantula' 1951

Out among American Western wastelands this spider like Kaiju has been growing in numbers for centuries. These things have an incredible appetite for humanoids, farm animals, & anything that crosses their path. The giant  Tarantulas  are also a food item for many other Kaiju as well providing other mutations a much needed food source. But these deadly Kaiju are also excellent hunters of man & mutant kind. 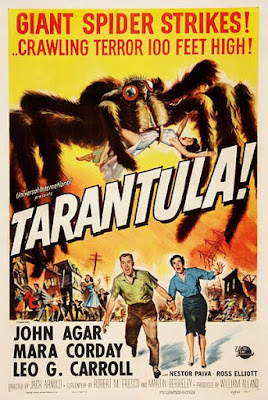 The Tarantulas unlike their normal counterparts these mutates are prolific breeders & expand their wasteland terrorities outward every dry season. They also have the characteristics of Crustaceans  as well as  Arachnida. These mutants have an instinctive almost obessive hatred of power armor or mecha. They go out of their way to attack these whenever they can. There is also a cunning & diabolical mind behind the weird eyes of this creature. These Kaiju display a type of evil & twisted cunning. They will lead adventurers into box canyons, use their webbing to create traps, & take out the strongest member of a party if they can.The Tarantulas  also have a strong affinity towards killing anything that they can take advantage of.
They also sneak around when & where they can never quite resist the urge to sneak upon their prey. They then use a quick coating of webbing to subdue their prey. The Kaiju uses a mixture of implied menace & traps to back prey into a corner. A circumstance  where its quick acting poison can dispatch the victim. The beast will feed at its leisure.
The monster is an aggressive hunter with a bad attitude towards anything that crosses its path. The Tarantula Kaiju is a hunter first & a menace second. The thing knows that its very presence unnerves both victims & prey animals. So its avantage where & when it can with fast strikes & lightning raids on prey.
The Giant Tarantulas
9/18, Move 10m, Armor 6, 2 Fangs (melee 1D damage each) or 1 Bite  (melee; target must throw Physical 6+ or die from poison within 1 turn). Combat-2, Physical-2, Survival-1. Gigantism, Web