'In God's name, what are you trying to do here?' I burst out. 'What does it all mean? Do such abominations really exist, on earth or in any hell?'

He laughed again, with an evil subtlety, and became evasive all at once. 'Anything may exist, in a boundless universe with multiple dimensions. Anything may be real — or unreal. Who knows? It is not for me to say. Figure it out for yourself, if you can — there's a vast field for speculation -- and perhaps for more than speculation.'
Clark Ashton Smith The Hunters From Beyond 1932

Out among the foaming soap bubbles of reality that wash against the lower dimensional & planar realities of our local time & space continuum there are hunters. Among these shores these  hunters from other places feasters from afar & very near at hand. Clark Aston Smith's "The Hunters from Beyond" was first published in an issue of Strange Tales of Mystery and Terror for which it proves the cover story. 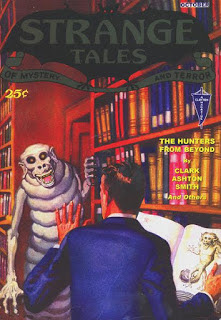 "The Hunters from Beyond" trods the same terrority as H.P. Lovecraft's 'The Horror In The Museum'; '"The Horror in the Museum" is a short story ghostwritten by H. P. Lovecraft for Somerville, MA writer Hazel Heald in October 1932. It is one of five stories Lovecraft revised for Heald. The story has been reprinted in several collections, such as The Horror in the Museum and Other Revisions.
These hunters come from a plane that overlaps our own on occassion. They are often called from; " a lower dimension described as "a long, gray, oozing plain, beneath skies where the fumes of Hell were writhing like a million ghostly and distorted dragons." In this dimension thousands if not more Dimensional Shamblers live."
What happens when we go back to Clark Aston Smith's "The Hunters from Beyond"?! We suddenly find out several interesting things. The creature in question wasn't called into our 1932 reality with any magick what so ever. The creatures differ greatly from Lovcraft's works & there vast difference in the monster's methods sort of. In the Dimensional Shambler wiki entry on Lovecraft fandom.com we get the following; "In "The Horror in the Museum" (1933), the Dimensional Shambler is described as black in coloration and resembling something half-ape, half-insect. These traits differ it from the creatures described in Clark Ashton Smith's "The Hunters from Beyond" (1932), which are pale-grey and look more canine-like in appearance; although they've also been compared to apes. It is possible, however, that the difference in coloration at least might be due to the fact that the Shambler in "The Horror in the Museum" was long-dead; being merely a preserved hide. Then again, the fact that the "Hunters from Beyond" cannot interact with the material world properly could lead one to question whether a deceased specimen would even become tangible enough to be preserved in the first place."
The answer to this comes in the form of the occultists, sorcerers , & black wizards of original Dungeons & Dragons or Lamentations of the Flame Princess rpg summoning spells.  Twisted occult technologies or artifacts left behind could easily proved the gateway for such creatures into our reality.

The Hunters From Beyond 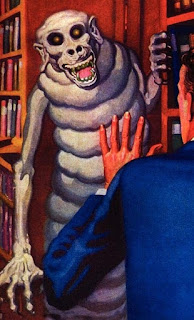 Intelligence High & Up With A Rabid Animal like Cunning

Hunters from Beyond  can shift between planes once per hour, using an effect that is similar to that created by the plane shift spell, & also have the ability to blink as per the spell once per hour as well. The Hunters from Beyond may also teleport without error once per day to their prey once they have encountered a victim. The hunters also have an uncanny gate like ability to gate in 2d4 more of their ilk to take a victim back to their own home plane.
They may be summoned to our reality by a simple variant of the  first level summon spell found in Lamentations of the Flame Princess rpg. The hunters & the dimensional shamblers are always looking for access to our reality. They are deadly hunters & horrors beyond human understanding.