Created ages ago on the plane of  Crystallium,  Moltar the Ruthless was one of two twin brothers who sided with the forces of Chaos through the second Chaos Wars. He & his followers were turned into elemental chaotic warriors servants of Chaos forever more by the dark wizard Zardeth. They have roamed the planes in the service of Chaos when & where needed. Moltar's twin brother Crystar serves the forces of Order & always seems drawn to oppose his brother. Moltar's elemental queen of evil & chaos Lavour is never far from his side. The lava warriors of Moltar are often seen acting as mercenary muscle for the forces of Chaos throughout the planes. Moltar is a 9th level fighter with all of the abilities appropriate to his level. Moltar's  chaos warriors lava men  act as  3rd level fighters. 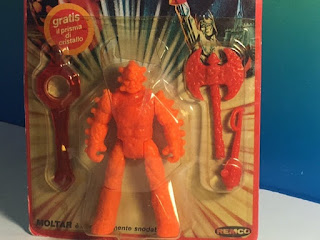