I sat down with an old VHS horror classic with Jeffery Combs ! Not the Reanimator series but the seldom mentioned but often rented Necronomicon. Its one of those films that came out in the Nineties.  H.P. Lovecraft's: Necronomicon, always seems to have been out at the back alley hole in the wall video rental place I worked in. Its a weird beastie of an anthology film with an 'R' rating meaning plenty of Nineties T&A with a wrap around story starring Combs.

So what does this film have to do with old school gaming? There are loose connections & more that can be mined here so bare with me for a moment. First of all this film has a hell of a cast; "H.P. Lovecraft's: Necronomicon, original title Necronomicon, also called Necronomicon: Book of the Dead or Necronomicon: To Hell and Back is an American anthology horror film released in 1993. It was directed by Brian Yuzna, Christophe Gans and Shusuke Kaneko and was written by Gans, Yuzna, Brent V. Friedman, and Kazunori Itō. The film stars Bruce Payne as Edward De Lapoer, Richard Lynch as Jethro De Lapoer, Jeffrey Combs as H. P. Lovecraft, Belinda Bauer as Nancy Gallmore, and David Warner as Dr. Madden."
It sort of goes for a weird 'Bordello of Blood' meets 'Tales From the Darkside' in a back alley for a quickie with a side of  H.P. Lovecraft's Mythos thrown in as its framing device. Its sleazy, humorously dark, not PC at all, plays very fast & loose with the Mythos.
Its actually partially the framing device that allows the DM to draw on it for old school games but we'll get to that in a moment.
"The three stories in the film are based on three H. P. Lovecraft short stories: The Drowned is loosely based on The Rats in the Walls,[1] The Cold is based on Cool Air,[2] and Whispers is based on The Whisperer in Darkness.[3]"
Yeah its actually the The Whisperer in Darkness that helps to move the entire anthology along & its the Mi Go who are actually the secondary antagonists in the film. They've set up a small monastery where Comb's Lovecraft goes to access the Necronomicon for research for his fiction. What he actually wants to do is steal the forbidden book & things don't quite go as planned or do they?
"In the wrap-around story of the film, H. P. Lovecraft (Jeffrey Combs) learns of a monastery where a copy of the Necronomicon is held. Having been a regular there for his research, he sets up an appointment, his cab driver told to wait outside. Taking insult when the head monk calls his work "fiction", Lovecraft insists that all his writings are true. Requesting to read the Alchemical Encyclopedia Vol. III, Lovecraft steals a key from another monk and flees to the cellar where the Necronomicon is being held. Unknown to him, a monk has seen him. Unlocking the vault where the book is held, the door closes behind Lovecraft unexpectedly, making him drop the key down a grating and into the water below. As that happens, one of the seals is opened.
Lovecraft sits to read and record what he is reading. It's not specified if he sees visions of the future through the book, or if the book contains future accounts. It's likely the stories will come to pass, and for the Necronomicon have already passed, alluding to the Necronomicon's timelessness, as all the stories take place well beyond the 1932. " "
So who the heck are the Ommati monks & why are they setting up shop as an occult society right in the middle of  Los Angeles? Simply put these Mi Go were part of the second wave of occultism that swept through America in the 30's. Note that this H.P. Lovecraft is more of an occultist then our 'real world' version. He's brave, conniving & the perfect media for the Lovecraftian gods to get their messages of insanity into the world. 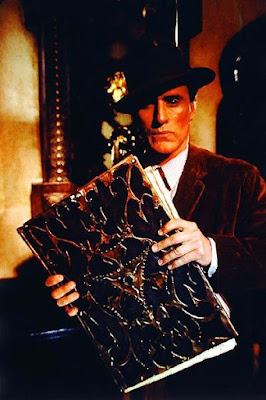 Yeah its all a set up, the Necronomicon shows him stories & visions of its forbidden knowledge in the form of stories with snippets of its forbidden wisdom thrown into the mix. Not enough to really drive him mad per say but him insight into the dark recesses of its true potential. The film is great because it drives Lovecraft purists up a wall. Take for example the 'Drowned' which has figments of The Shadow Over Innesmouth


& the Rats In The Wall. Edward De LaPoer, a member of the De La Poer family is tracked down & given an envelop from which he learns of the tragic fate of his uncle. The creature featured  might be an avatar of Cthulhu with hints of its own very small remnants of a cult around it.
Then you get into the 'Cold' with a twist of weird science gone very wrong & the twist of medical conditions gone very wrong. Cold is three parts boring, insane, & whole unique with some ideas that are so twisted that they could shock even the most jaded of palettes.

'Whispers' is the final installment taking place in modern day Philadelphia which is in the grip of "the Butcher" a dangerous serial killer. Its a really twisted tale of two police officers, Paul and Sarah of the Philadelphia Police Department who run afoul of a group of degenerate Mi Go who are using humans for reproduction. Its a really nasty Nineties gore fest with a twist of the usual VHS classic gore.

Then we flash back to Lovecraft whose had access to the Necronomicon this entire time & there are a wide variety of traps with various sigils that have been revealed within the 'vault' where the book was kept. There's a degenerate avatar of 'Dagon' down below the grate where Lovecraft was sitting but he rolls a 'twenty' with his sword cane. Then the final reveal as a child of the Outer gods comes to claim Lovecraft's soul & he manages to escape the 'monastery'. The 'Necronomicon' is in his possession & roll credits.
Surely there is no way that this film could be used as old school adventure fodder? Actually it could be & has by me several times. Right off of the top let me clear up why the
Ommati monks would let Lovecraft have access to the book. They were ordered to by Nyarlathotep in order to spread the madness of the Outer Gods. This version of the book of the dead would probably have 1d20 minor black magick spells with 1d6 major Lovecraftian spells. 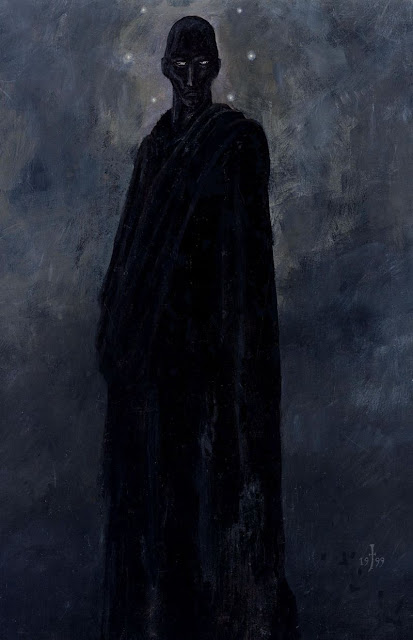 "The Black Man", artist Jens Heimdahl's rendition of Nyarlathotep,
according to H. P. Lovecraft's story "The Dreams in the Witch House".


As for why the Mi Go would be using the Twentieth century as jump point is because this is merely a beach front in a war that has been going on across space & time with other aliens such as the Great Race of Yith. 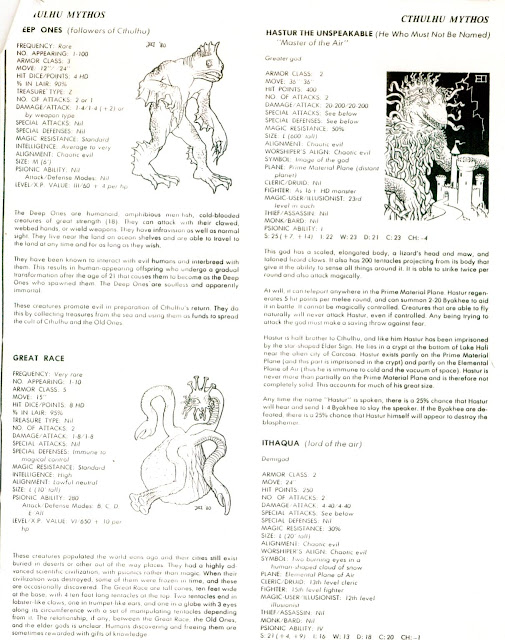 We have no idea where or when the Ommati monks got their copy of the Necronomicon nor where it came from making this a perfect set up for PC's to do a recovery job sometime in the past. While this book does seem like a potent artifact its certainly not up to the standards of the original book.  This makes me suspect that this might have been or is a fake copy that's been created as a prop to keep cultists of Nyarlathotep safe. The monsters, cultists,etc. all mentioned in the movie are dead ends to the Old Ones & Outer gods. So instead of merely destorying them outright they use them as fodder for others such as the Inquisition or other investigators of the Lovecraftian. While this is not a great film its a great piece of VHS weirdness from the golden age of horror of the Nineties. There are lots of angles to mine here and Combs Lovecraft makes a great occultist NPC & one that players don't expect. A man of action & some bravery instead of the usual sniveling depictions I've seen in several novels.

There are certainly several things I love about the film but this is one that devides both the horror comunity and the Lovecraft purists. There's lots of fodder in HP Lovecraft's Necronomicon Book of the Dead. But you've got to look around for a copy on the internet or VHS. Its never had a Blu Ray release. For the record this trailer drives me crazy, Clive Barker never took much inspiration from H.P. Lovecraft. He's always had his own imagination to pull from.

Please note that this blog post is not an attempt to violate the trademark or copyright of the film Necronomicon: Book of Dead (1993) This blog post is for entertainment,  informational, & educational purposes only.  All other ideas are  copyrighted to the original writer.