This is one of my favorite old school Saturday morning cartoons/anime that I encountered on Nickelodeon back in the early 90's or so. My fiancee whose from the U.K. recently spoke to me at length about this one. Since I've been down with the flu the last day or so my buddy Peter has been keeping me supplied with DVD's and this one was among them. Most of what follows comes from the wiki entry right over
HERE 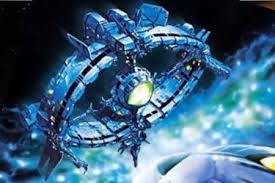 Plot : The plot line of the series, (made by the French Jean Chalopin), describes the struggles of Ulysses and his crew against the divine entities that rule the universe, the ancient gods from Greek mythology. The Gods of Olympus are angered when Ulysses, commander of the giant spaceship, Odyssey, kills the giant Cyclops to save a group of enslaved children, including his son. Zeus sentences Ulysses to travel the universe with his crew frozen until he finds the Kingdom of Hades, at which point his crew will be revived and he will be able to return to Earth. Along the way they encounter numerous other famous figures from Greek mythology who have been given a futuristic twist. 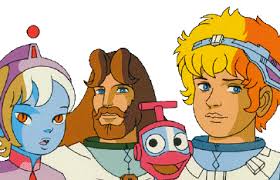 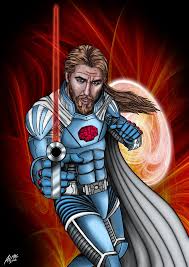 Main character and captain of the Odyssey. He achieved the solar peace before becoming the subject of the Olympian gods' revenge. His weapon of choice is a laser pistol that conceals a blade very similar to the lightsabers in George Lucas' Star Wars, complemented by an energy shield and a belt that allows him to fly. Ulysses is brave, noble, determined, and will stop at nothing to defeat the Gods and the conditions imposed upon himself and his companions.

Son of Ulysses and second in command for most of the voyage. Yumi's friend and protector. Very beautiful, as described by Yumi in their first encounter. Courageous, adventurous, and level headed. He is a skilled pilot, and his weapon of choice is a hi-tech, energy-ball shooting slingshot.

Thémis in the original French dub (after the name of the ancient Titan). A blue-skinned humanoid alien girl from the white planet, Zotra. She is the younger sister of Numinor and possesses telepathic powers. She is saved from being sacrificed to the Cyclops, along with Telemachus and her older brother, by Ulysses. She also exhibits telekinesis to some extent, as shown in the episodesAt the Heart of the Universe and The Lotus Eaters; in addition, she is immune to fire. Although physically very frail, she is very intelligent and courageous. Zotrians, aside from blue skin, have snow-white hair, pointed ears and slanted eyes with cat-like vertical pupils; they are considered extremely beautiful.

Noumaïos in the original French dub. A Zotrian teenager and older brother of Yumi. He is saved by Ulysses from being sacrificed to the Cyclops. He is in suspended animation along with the rest of the crew for most of the series. Like his sister, he is considered extremely beautiful. He has a sweet and very gentle personality. He is courageous, as well as trustworthy and loyal. He awakes three times before being finally released from the gods' curse in the final episode of the series: The first time in The Lost Planet, where the Odyssey comes across a white Zotrian moon. Secondly, in Mutiny on Board, where the crew are subjected to possession by an alien essence. The third time is in The Magician in Black, when the entire crew is awakened by a powerful spell by the mysterious Magician in Black. Japan name Yumaiosu is the katakana ortography of English pronunciation of Eumaeus, the pig-guardian of Odysseus in Homer's poem.

Small robotic companion of Telemachus. Fond of eating nuts and nails. He is a trusty friend who was given to Telemachus as a birthday present. He is rather timid, but can be relied upon in a crisis. He is skilled at machinery repair and possesses tremendous physical strength.

The god of gods, Ulysses' persecutor.

God of the Seas, he is enraged by Ulysses' killing of his creature, the Cyclops. He wields a trident, the symbol of his power, and his servants pilot ships that are shaped like a trident.

Ruling god of the Underworld. Ulysses must find his realm to find the way back to Earth.
Using Ulysses 31 For Your Old School Space Opera 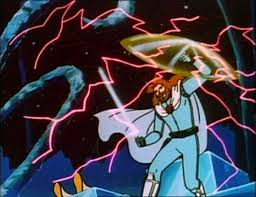 I always have loved this anime and personally I think it would make a fantastic campaign for either X plorers or Stars Without Number. The juxtaposition of anime and mythology got me thinking about running this as a one shot or perhaps as a complete campaign.
The Destroyer star ship class from Stars Without Number makes a good solid stand in for the ship from the crew of Ulysses you are looking at a battle ship from Stars Without Number.
We're possibly looking at least a decaying tech level four interstellar society almost about to collapse under its own weight. This is a very decadent   and dangerous time as the mythological planar powers are reasserting themselves. We might even be seeing a shift between the powers of law(in this case science and technology) and the emergence of chaos.
Much of the interstellar backdrop that the crew of show finds themselves in a fun house mirror of actual Greek mythology and the powers of Ulysses world are dark, dangerous, and almost Lovecraftian in nature. They'e  actually how I pictured Nodens and his bunch in my mind. There are a good deal of cults and mystery religions echoing through this series and my bet is that there are much much darker corners of Ulysses's universe that we don't get to see. There are also a number of dangling plot hooks just weighting for a party of adventurers to solve that the crew of this show leaves behind.Pick your Greek mythological poison and add a technological twist for a first adventure or simply use the dangling plot hooks that the show left behind. If the gods were screwing with Ulysses over a minor infraction. Who knows what they might do to worlds that displease them.
Don't be afraid to take risks with this type of campaign. Speaking to several players today I got a sense that even through this was a kid's show it had a dark streak that folks took too. "His weapon of choice is a laser pistol that conceals a blade very similar to the lightsabers in George Lucas' Star Wars, complemented by an energy shield and a belt that allows him to fly."
Ulysses's weapons are tech level four and family heirlooms. PC's should only encounter such items after a series of  life threatening events and adventures! Experience should be handed out for such treasures but it doesn't mean that they'd work for any given amount of time.
There is a metric ton of room to explore the 'Ulysses thirty one' universe and as such the DM is fairly open to explore and feel free to interpret their own version of this old school anime classic.

Ulysses 31 makes a perfect campaign canvas for Stars Without Number rpg  especially with The Codex of the Black Sun: Sorcery book. You've got all of the factions, powers, & even traces of 'the Roman Greco gods' in this book. 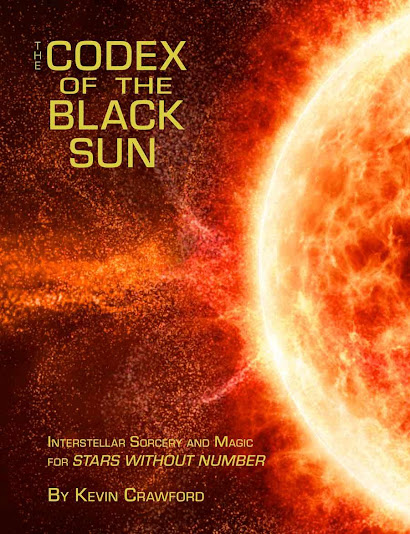 So what the Hell is up with the 'gods' in Ulysses 31? Someplace in humanity's distant past in the universe of the anime we had some falling out with what appear to be these gods. Magick & divine magick is found within the setting but extremely rare. And this sorta of fits the options that are within The Codex of the Black Sun: Sorcery.  Many of the tropes & ideas that are within Ulysses 31 are already available to the DM in Stars Without Number.