Review & Commentary On Pegasus #10: Revenge of the Ant God From Judge's Guild 1982

Tonight I'm gonna dive into Pegasus #10: Revenge of the Ant God adventure by Judge's Guild. Now there are reasons for this. Let's dive into the issue & we'll explain this one. 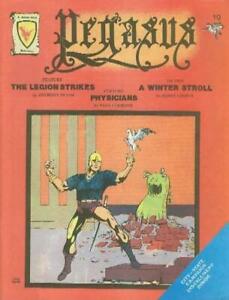 So a little while back I got a thumb drive from a DM friend whose moving outta Connecticut & happened to mention this to my current group of players. What's on the thumb drive? The dungeon master's original  Judge's Guild collection including adventures & supplements. Now from time to time there have been murmers on this blog of using some Judge's material. But everyone just loves original JG's material & so even with the current Cacophony of  campaigns going on its been. Can you please slot this material into our current games?! Now bare in mind that since '08 and my first blog that the 'forever DM' has been me. With DM Steven currently down its been up me to once again shoulder the fun. 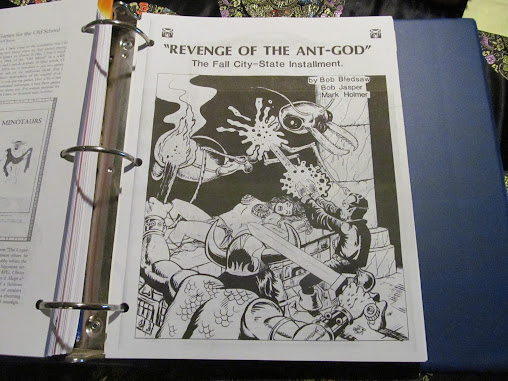 On MeWe I've got Jon HershbergerWilderlands of High Fantasy group. So for the past couple of months I've been lurking there but there's been something very weird that I noticed. 'Revenge of the Ant God' was written by Bob Bledsaw, Bob Jasper, and Mark Holmer in October of '82.  Whole adventure has the feel of a certain classic Horror/Sci fi film film from 1954. The classic Them from '54 is most obviously the inspiration for this adventure & that's not a bad thing at all.

The PC's come into this Advanced Dungeons & Dragons adventure getting into the deep end of it straight off. The lure & hook of the adventure starts off similar to the film but gains speed quickly & picks up with a wizard messing with forces of nature best left alone. The descriptions here place the giant ants within a very dangerous structure of both nest & government. PC's become involved through the machinations of a mercenary who grew up in the region as a young boy. As I said this is a tight adventure. 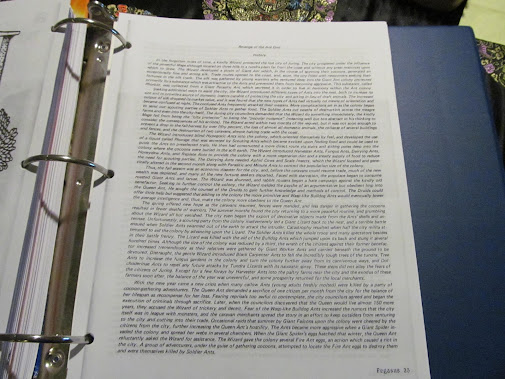 The layout is typical Judge's Guild of this era, and the background is laid out similar to the movie Them with vital clues scattered throughout the adventure. But this adventure is both part investigation & part wilderness crawl. There are a few stand out NPC's in 'Revenge of the Ant God' The cartography is stand out, the and premise is new for its eras well. There's a real sense of forboding & this could become a mini campaign with the adventurers up to their neck in this adventure. 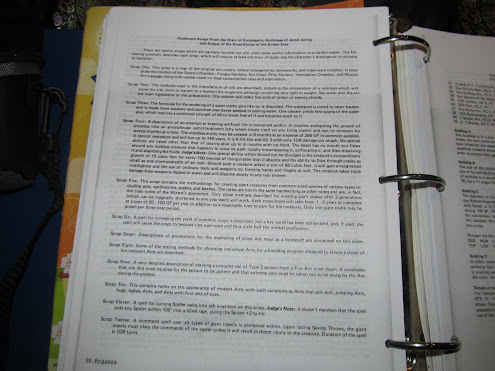 Others have come before the adventurers & there are lots of mutated ants within the nest & or hive. The impression that I've gotten is that this isn't the only hive within the Wilderlands of High Fantasy. There's far more boiling below the surface with
'Revenge of the Ant God'. 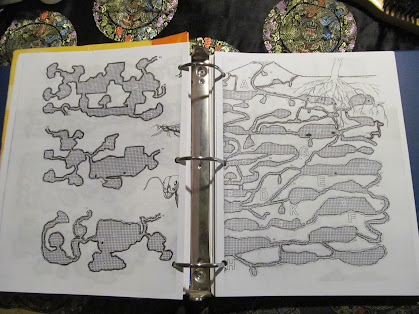 The safety of the adventurers is depending upon their actions may have very large reaching consquences especially if the druidic ruler has others of his ilk gain control over  other giant ant nests! This is in my humble opinion one of the most underrated Judge's Guild adventures. There is in  'Revenge of the Ant God' enough for a small campaign with room to expand the plot beyond the bounds of the material within the original play through of this module. 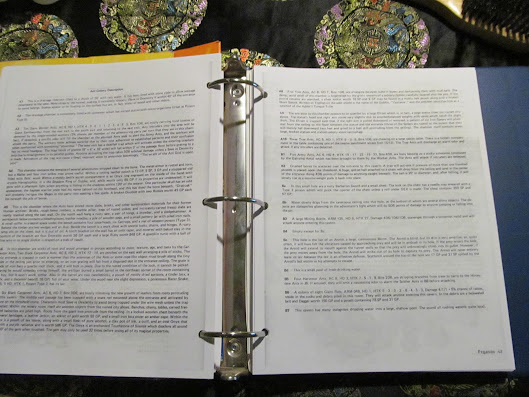 And its this replay value that adds to the mysque of the module. The cartography adds to old school claustrophobic feel of the  'Revenge of the Ant God'. And this enhances over all play & ultility of the module. 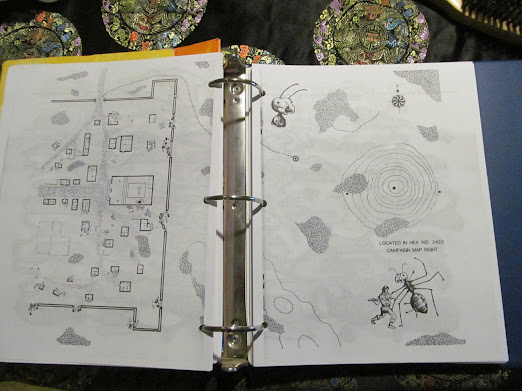 The craziness of the  'Revenge of the Ant God' gives the module a very solid Sword & Sorcery meets Creature feature over all feel. This is done outta of love for the genre & not as a slight. Even though this is an Advanced Dungeons & Dragons first edition module. There's a very well done adaption for Castles & Crusades by James Mishler Games that takes a very back door approach. 'The Chronicles of Mhoriedh: Gods, Demi-Gods, and Cults Vol. 1: Chaos Queen of Ants' 2013 could easily adapt 'Revenge of the Ant God' into a Castles & Crusades conversion. And in point of fact I think is the true purpose of the product. 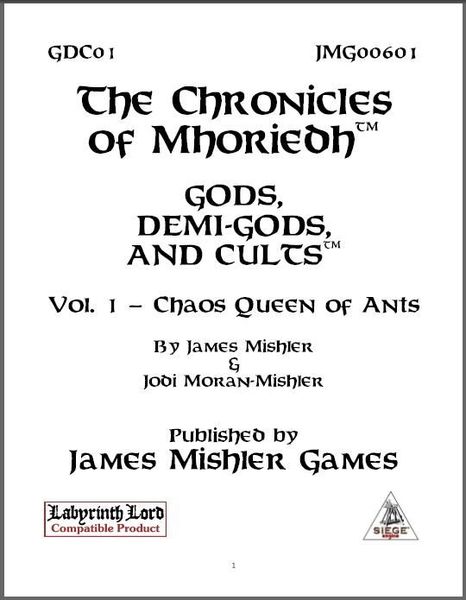 None the less this does nothing to take anything away from the original classic of  'Revenge of the Ant God'. Could PC's die in this one? By the score & most likely they will. Would I run this one?! You bet you I would & tracked down my pdf copy on the thumb drive. 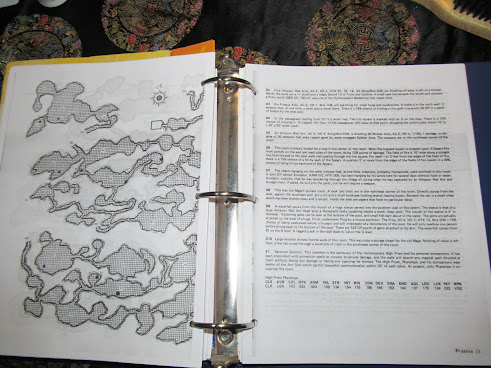 In the end 'Revenge of the Ant God' is both a product of its time & a solid entry into the classic annals of the Wilderlands of High Fantasy. Would I run this one? Yes but not for the unexperienced OSR or old school gamer. This is a very nasty module & death is around every corner & ant hill. This is a solid old school entry into the darker recesses of the Judge's Guild catalog. 'Revenge of the Ant God' is a solid adventure entry for Halloween! 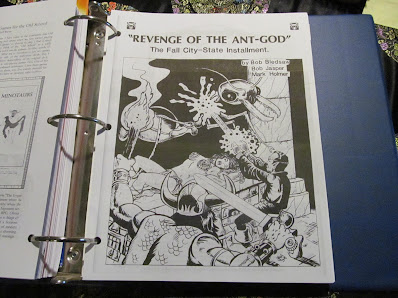 Because Troll Lords is getting ready to launch a new Kickstarter soon I figured that 'Revenge of the Ant God' was a perfect crossover adventure to take a look at. 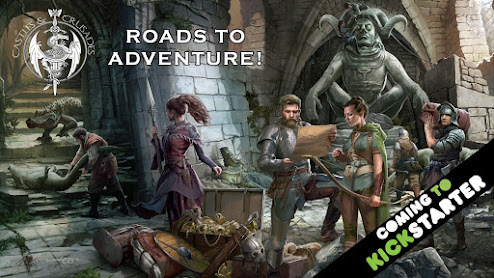