This looks like the X men movie that we've been waiting for? Or is it? It's really interesting looking and with so many Marvel properties in the mix now a days things are very busy for an old comic book fan like me. It's nice to see Bryan Singer returning to the directing chair. The reason I say this is because from a  cohesion of storyline stand point I've gotten a bit tired of redo's and recons of Marvel properties. 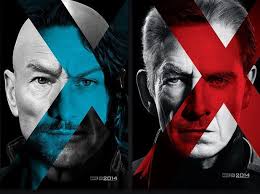 I would love to see a tie in with Agents of Shield or some of the other Marvel properties but the problem is that these properties are scattered to the four winds by the various studios. A fact that seems to escape some folks. Here's a break down over HERE

Many of the players here are from the X men First Class movie and as we wander down the movie version of the Days of Future Past, things are starting to look up for this movie. I like what I see with this one. There's a vibe of the humor, pathos, and of a hint of a great movie or its it a great trailer? Hard to tell but I did enjoy First Class so we'll see what happens.

So we're going to get the Scarlet Witch and Quicksilver in this one and we get another round of Magneto and Charles friend ship tearing the whole tapestry  of Earth apart. Will we see a Scarlet Witch tie in with Age Of Ultron? Color me curious to say the least.

My criteria for these  films is that they should make me want to run an old school super heroes rpg campaign.

So far things are sounding really solid but I just can't seem to get into the design of the new Sentinels.


There's something classic about the comic Sentinels to me.

The Sentinels look like an I phone or tablet technologies not horrid cybernetic units  that are capable of ripping PC's apart.

The one important point here is that the Xmen comic book is classic. And this is a movie and there are all sorts of issues putting onto screen a story line with this many comic fan's expectations. Will they nail it?

That's going to be the real heart and soul of the matter. TSR had a very nifty way of dealing with the marketing that appealed to the fans of the Marvel comic and the game. But it always falls back to this.


The comic book vs the movie is real the issue. The old school Marvel Superheros Heroes rpg had a very nifty time of marketing itself. Especially the Days of Future Past Adventures, they took place within your home town. The  dystopianism was knocking right on your campaign's front door and it was coming to kick your PC's teeth in.

As the adventure story line continued your PC's were hunted, exploited,humiliated, and almost sentinel bate at least a couple of times. That's only in the first adventure BTW and I ran the hell out of this one back in the nether reaches of my misspent youth.
Surviving such a programme is isn't easy but the fact that these now classic adventures are available for free makes me very curious to run em and see how they hold up.
They're all available right over HERE
Posted by Needles at 4:50 PM