I got a call on Sunday afternoon from my friend Peter and he wanted to know if I was available for a little old school action. They wanted something different.
Some friends of ours were visiting with him and the rest of our players. So I ended up with nine players . Allen and Nancy Scotte were old friends. Players of mine from way back but we drifted apart. Jobs, kids, new state, and more of the usual real life yaddah, yaddah.
But now I had to come up with a convention set style adventure.


Sunday was one of those days where I go into the old comic book stacks.  I was going through my comic collection including some of my old Marvel's Star Wars Comics and near by was my copy of Carcosa!
That was it!


There's something to be said for Marvel's Star Wars comics which were the fodder for many a West End Games session.
And now they were going to be fodder for tonight's descent into Hell  game.

There's something about Marvel Star War comics. Maybe it was the fact that they were always a constant between the Empire Strikes Back And the Return of the Jedi movies.


They've obviously been turned to Bantha fodder because the Expanded Universe was canceled. Whatever that means.
For those of us using them as material for old school games?
Not much at all.

With a bit of slight of hand the plot went something like this:
The PC's were prisoners on a crippled ultra black list Star Destroyer. This was a prison ship on it's way back to Tartan Base. A facility for the disposal of all rebel scum and undesirable elements to the Empire and the New Order.  On board were a group of renegade Jedi Knights only recently found. These survivors were on their way to be questioned, processed, and executed.

Express Elevator to Hell
Smoke, fire, warning lights, and flames as well as the occasional explosion is what you awaken to!
It gets worse because it always get's worse.

Something's wrong! Warning lights flashing, escape pods have been jettisoned and the PC's are aboard a crashing ship. 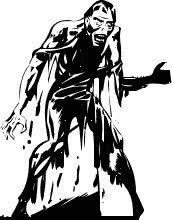 Did I forget to mention the ghuls aboard the vessel? The hungry flesh eating ghuls who are craving humanoid flesh?
There were forty of the bastards  that were on the PC's case. Using improvised weapons, a bit of  luck (using one of the other PC's as bate) and a bottle neck passage the PC's forced the things to battle them one at a time. The rest of the PC's managed to locate their light sabers in the armory.
Oh did I happen to mention that the Star Destoyer is crashing?

Next Stop Carcosa (maybe).
Posted by Needles at 9:30 AM