Imagine an Edgar Rice Burroughs Mars that is in the grip of a post apocalyptic era, a world of Leigh Brackett Mutant Red Martians tribes, ancient A.I driven death machines, and a landscape littered with a the ruins of a once thriving post colonial Mars.
This whole world as well as the solar system have been shunted into a pocket dimension by powers from beyond the scope of mankind. It is only now beginning to be explored and exploited after centuries of isolation
This Tuesday I'm diving back into my post apocalyptic Mars campaign once again. Looking around I discover or should I say rediscovered Arthur C. Clark's book Exploration in Space. The book postulates about exploring our solar system and beyond. It looks pretty instrumental in his later books and ideas put forth in 2001 and its sequels. Explorations is from 1951 and this is one of the color plates based on a drawing by R.A. Smith which was turned into a painting by Leslie Carr. The original post is from  HERE 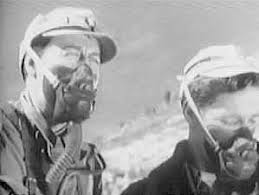 So these domed outposts would make great megadungeons in my Stars Without Numbers game. The retrofuture look goes right along with the post colonial period Mars history which then extends into a post apocalyptic Mars. This is a Mars that has only been 88 to 90 % percent terraformed. The whole planet is part Edgar Rice Burroughs and part high weirdness. The players have been exploring the Martian underworld which has its own challenges.
The surface is a mess of 'death machines' such as this super tank from the 1939 issue of Amazing Stories. Then there are the warring city states,the plagues, and much more. 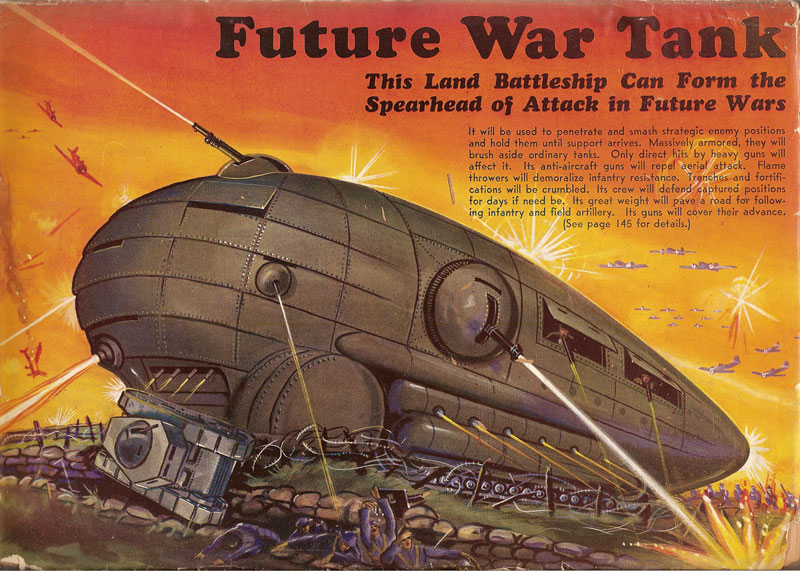 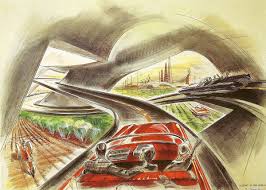 There are hundred of small ruins and a planet crisscrossed and riddled with thousands of tunnels. There are still working sub cars that routinely work and power still connects to certain A.I. controlled facilities.

Its only now that explorers from Earth and beyond are starting to land on Mars in atomic powered rockets and beginning to explore the layout of what's left behind. They're not the only ones. Already there are those who are funneling out resources, slaves, and mutant species for export and worse to other universes.
They're also running into mutant red men neanderthals, vicious lowlander and out lander tribes of what remains of some of the most viciously hit entropic city state survivors. Mutant degenerates who have been shaped by the fallout from horrid entropic bombs.
Tuesday night's adventure picks up with our heroes trying to piece together the lay of the land and find out who or what has been wiping out some of the Apex Adventurer parties down below in the bleak tunnels of Mars.
The Tech Tuesday  Free Download
Scott Hover's Kellri's Random Cityblocks 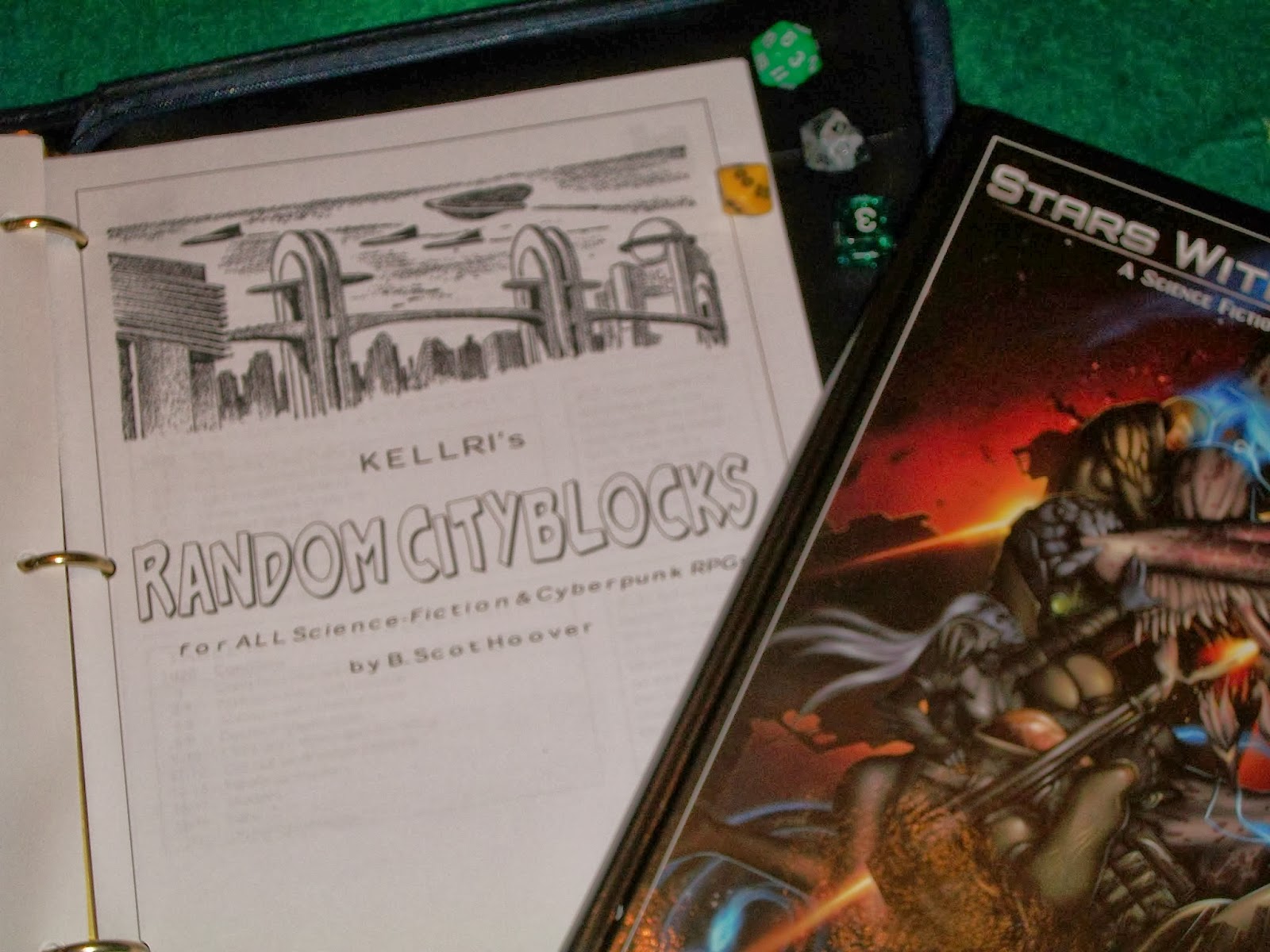 Grab it Right Over HERE
Grab it under the heading 'SciFi City Blocks'
So how do I fill out my Martian underground fast and with weird random stuff that goes right along with the proto Fifties and Sixties sci fi vibe that I'm using for this material? Well there's a great little nine page free download that randomly allows a DM to create from whole cloth all of the lost post Colonial Martian or old school sci fi buildings at the drop of a hat. This of course is Kellri's Random City Blocks pdf from way back in the ancient days of 2008. 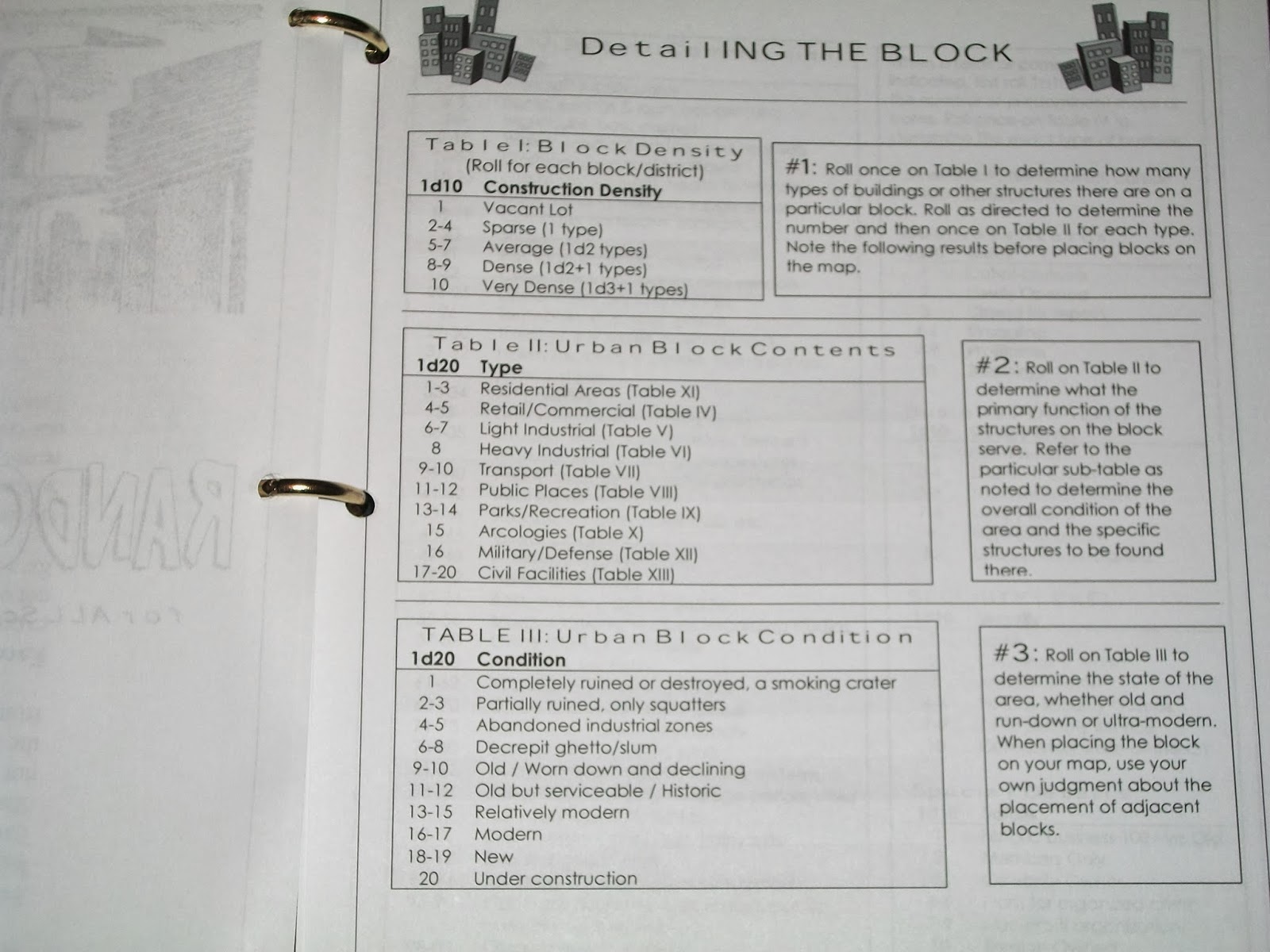 This is done as a 'Chinese Restaurant' method of creating city blocks. One thing from column A.and another from table B, the funny thing is that it works very well. Block by block an entire city comes together rather quickly and for old school DYI this is a solid as well as easy method for creation. 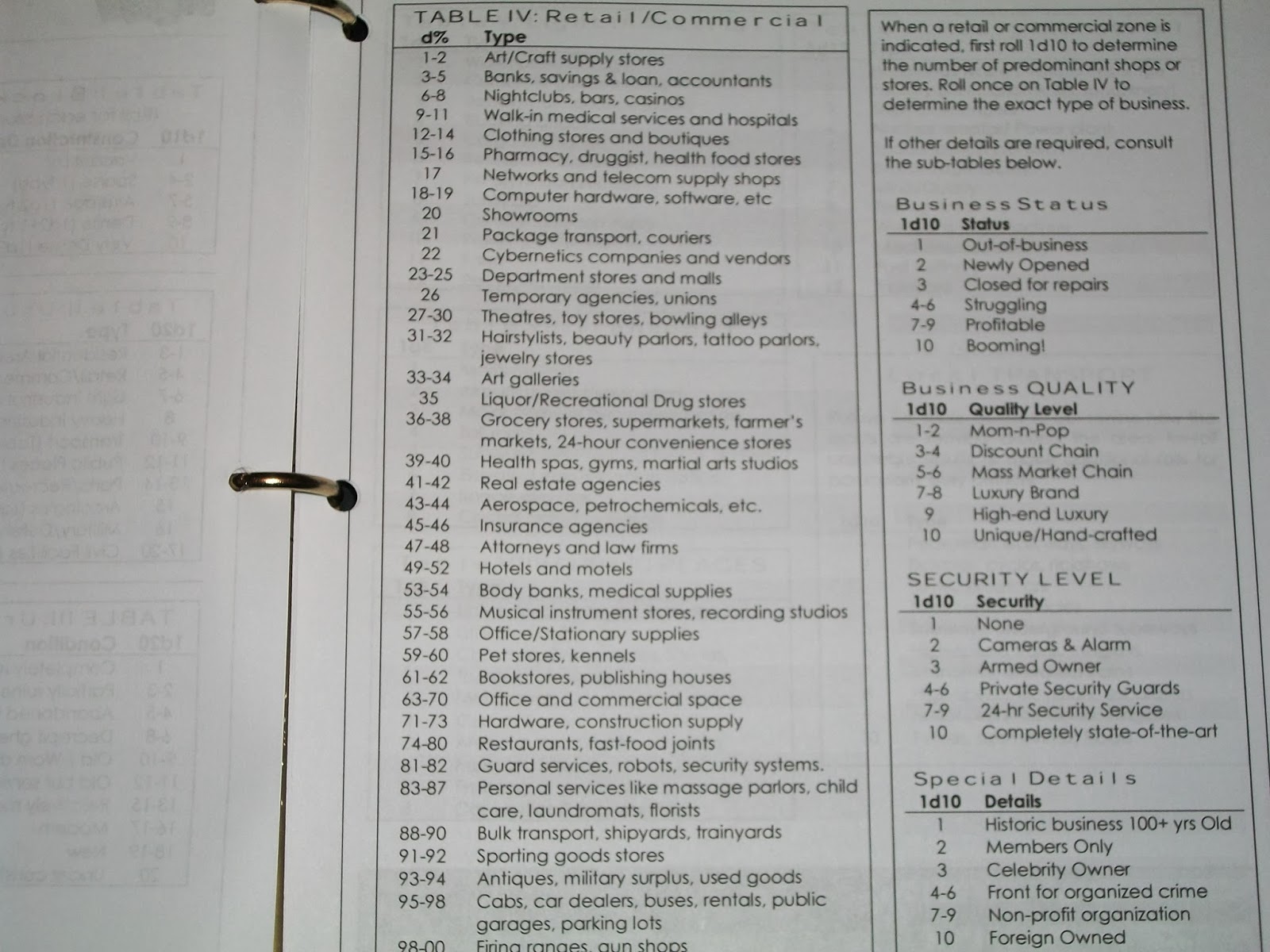 Much of the material can be used to fill entire space ports, colonies, and much more. Oddly because of the generic nature of the pdf it works rather well with Stars Without Number and for that game its a nice addition to the DM's old school arsenal. The fact is that because of the OD&D nature of the SWN game this one gets a ton of use in my games. Originally I downloaded it to fill out the backgrounds of Gamma World and Mutant Future. But its simply too darn useful to simply sit on a shelf. So it gets a lot of air play in my old school campaigns. I'm dusting it off for Tuesday's game. I hope you find it as useful as I do. 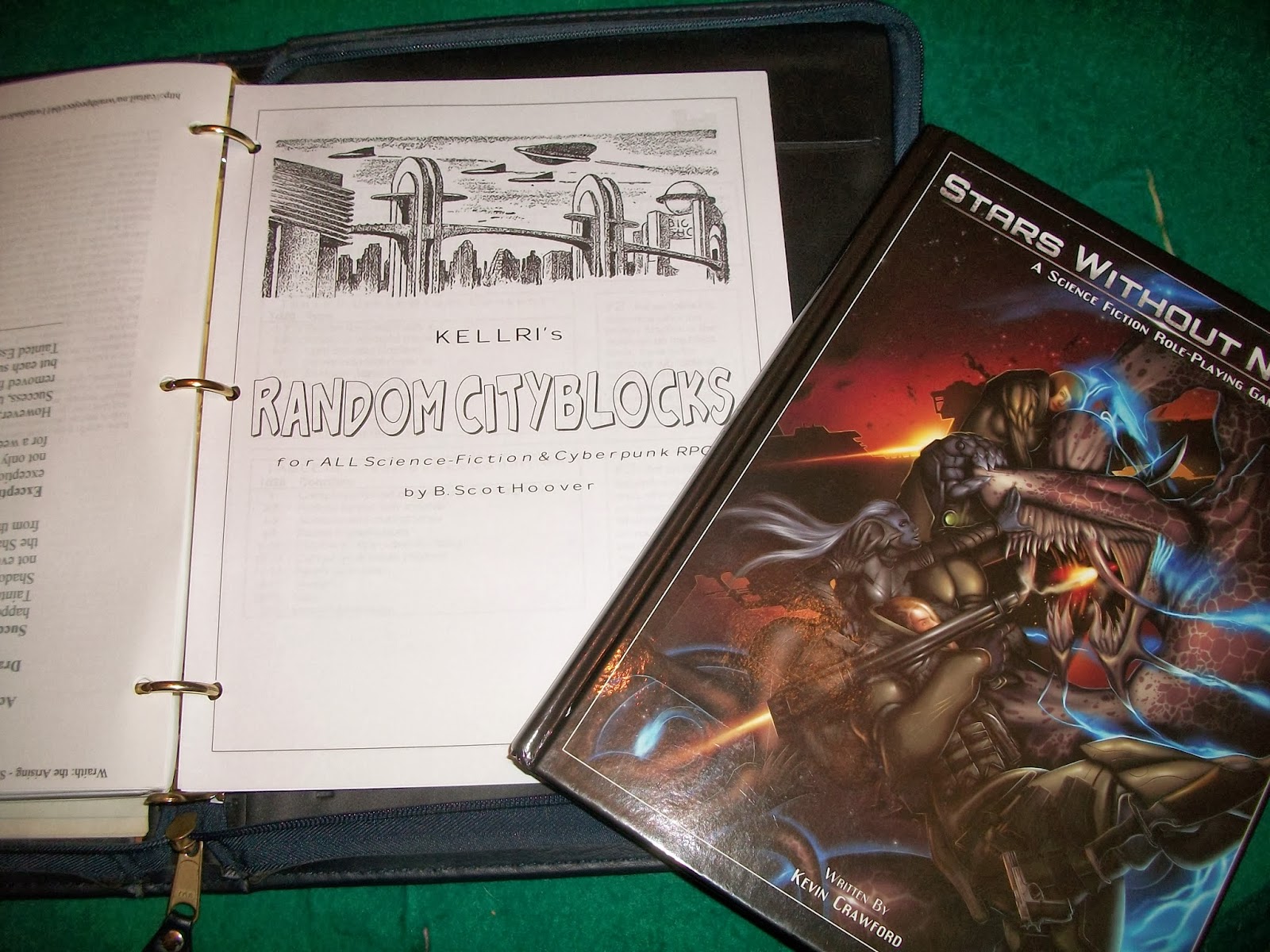