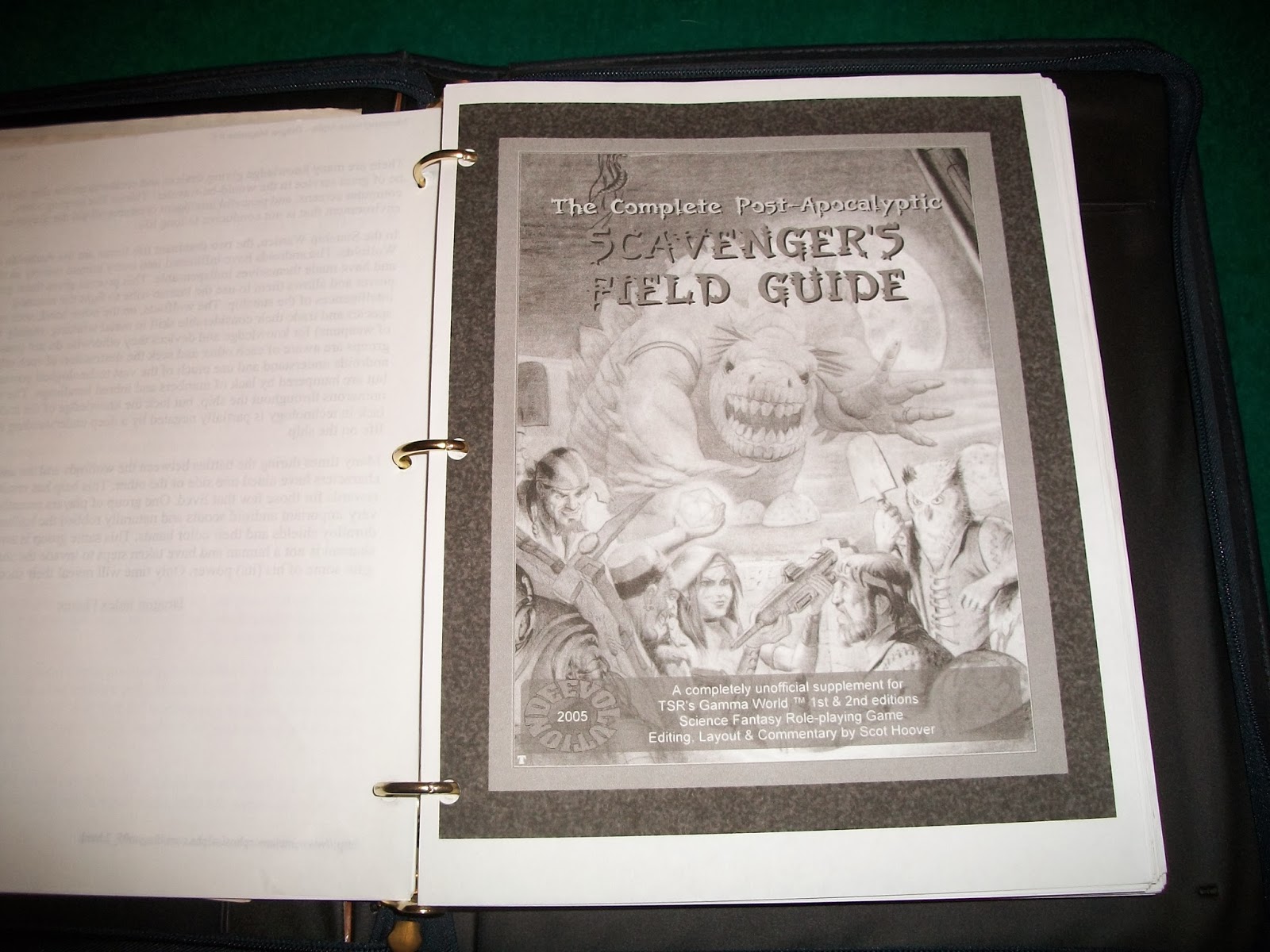 Grab It Right Over
HERE FOR FREE
Scroll down the right hand side of Kellri's blog and download it under Field Guide.
Thanks
The Scavengers Field Guide is a free old school post apocalyptic love letter by Scott Hover aka Kellri to the game he loves Gamma World.  Way back in 2005 when I was first dipping my toes into the OSR I happened across this 114 mutant extravaganza  that covers all the relics, robots, artifacts, and weird background treasures that are in Gamma World.
In his words :


Welcome to the Complete Post-Apocalyptic Scavenger’s Field Guide, the second in the DeEvolution series of


1st/2nd edition Gamma World netbook supplements. In compiling the equipment from across so many editions and
sources, I’ve tried to put together the Gamma World supplement I’ve always wanted to have on MY bookshelf next
to the Basic Rules Booklet. No more searching through a dozen out-of-print modules and magazines just to find an
artifact, no more cross-referencing between two books to find the REST of the stats. This is Gamma World the way
it should be. If you’re the gearhead Gamma Merigan type, check out the rules for constructing robots and power
armor. If you’re a Game Master looking to give your game that “Modern Primitive” touch, check out the updated and
expanded low tech weapons and armor. No longer is a club just a piece of wood in this wasteland! Lastly, players
and GM’s alike will get just the facts they need from the comprehensive equipment listings, all indexed for quick
reference. So,next time you’re taking a roadtrip into the Deathlands, remember to have the Field Guide handy, keep
your Mark V warm, and don’t eat the glowing snow.
Scot Hoover
Editor

The fact is that back when this net book was written I was trying to run Gamma World and getting my stuff ruined. This book changed that by having all of the old school post apocalyptic material in one handy resource. No longer was I having to scramble to find this or that relic. Creating detailed robots, androids, and Gamma World positronic PC's was easily done and handy.  The fact is that this is one very handy little unofficial pdf and its quite a slight of hand trick that Scott's done with the compiling and editing this book into one guide.
Need to know about black powder fire arms in your favorite old school GW setting and such. That's on page fifty. Need energy weapons and vibro daggers?
Well that's page forty nine. 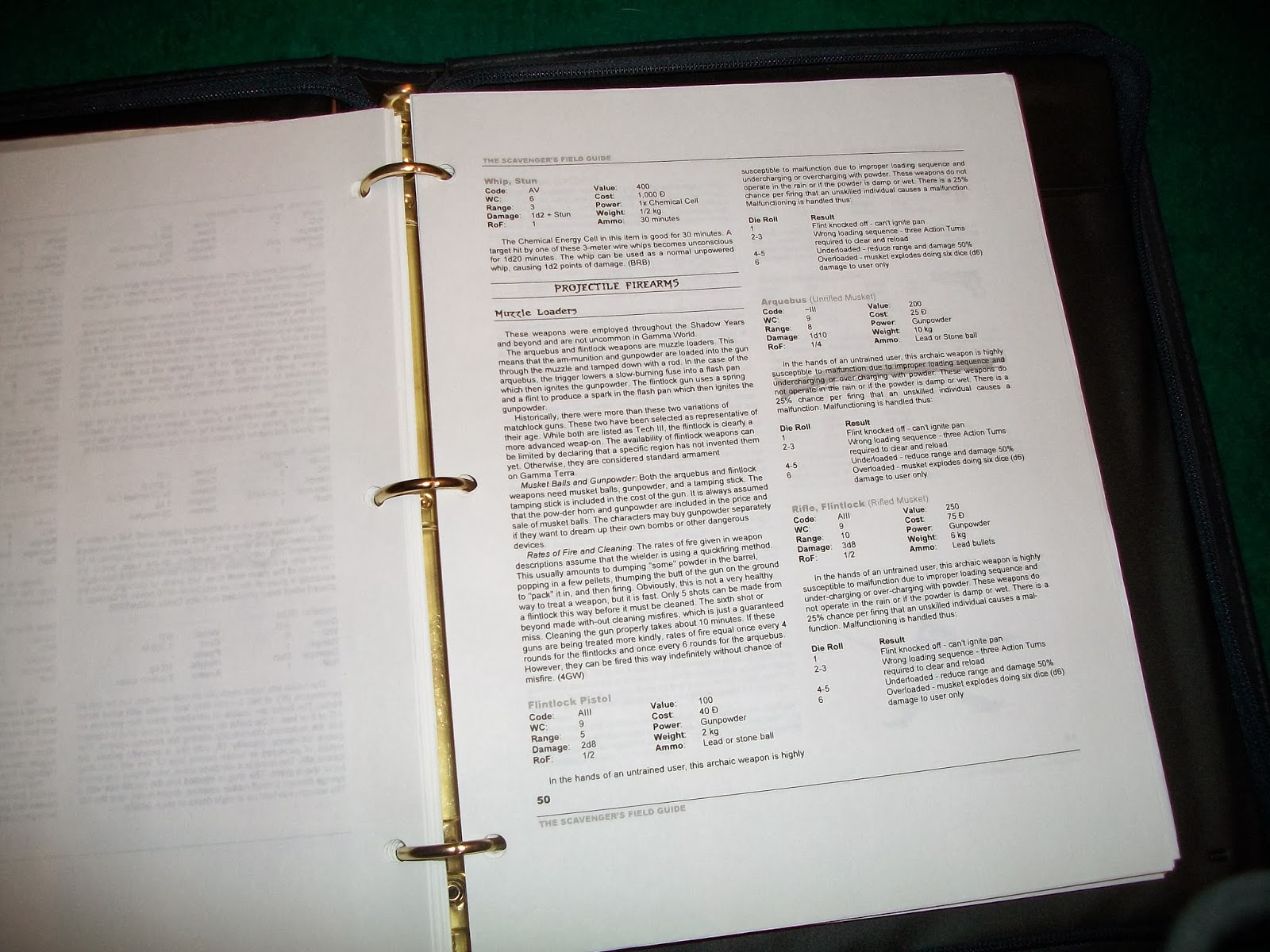 The lay out is clean and two column easiness to read and refrence during a game when you've got players breathing down your neck about the fate of their mutants and pure strain human PC's. There's mecha and robots weapons, power armor, and sharp sticks. Did I mention that all of this material has an index in the back? 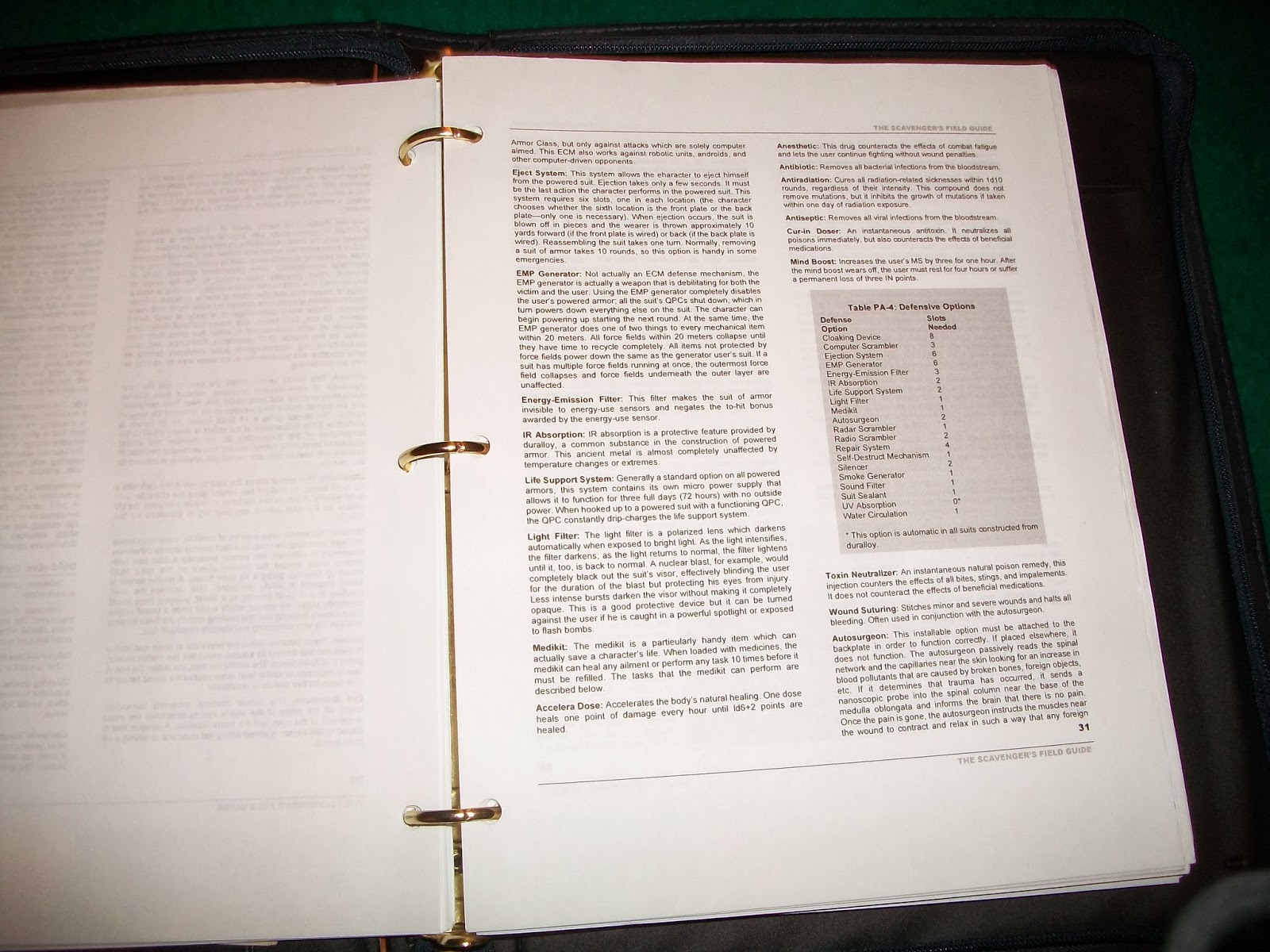 Please note that I own all of this material from the various sources and that having this net book has saved a ton of time, resources, and energy.
According to the book:
"This supplement would not have been possible without liberal and tireless plagiarism from almost every
published and out-of-print Gamma World source imaginable. Deep felt thanks go out to everyone who has ever
contributed to this great game over the past 30 years, especially Jim Ward and the staff of the now long-gone TSR,
Inc. Listed below are the sources for all of the converted and original material found here. In many cases, the
descriptions and some statistics were included verbatim for authenticity’s sake, and are credited at the end of the
appropriate text as abbreviations, which are also noted next to the source below.

The bottom line is that this is one of Scott Hover's love letter's to the game he loves and its a solid labor of love that any DM of Gamma World should have. The time, detail, cross referencing, and general insanity that went into this book is evident for anyone whose used it. I've run a very long and extensive post apocalyptic Gamma World campaign that was then converted over to Mutant Future. The fact is that this free download may easily be used with that game as well.
There is a whole range of stuff that I've done with the Scavenger's Field Guide and because its so well done its very easily used in a wide variety of old school games and retroclones.
No copyright or trade mark infringement was intended from this post or the field guide by either the author or myself. This post is for entertainment purposes only and is meant as a review of one of my favorite post apocalyptic free Gamma World net books. I hope you will find it as useful as I have over the years. As always your mileage may vary.
Posted by Needles at 9:43 PM