This is another free reference from Kellri aka Scott Hover subtitled AN ABBREVIATED LISTING OF CANONICAL MEN & MONSTERS FOR USE BY A DM WITH ADVANCED DUNGEONS & DRAGONS™ADVENTURES
Available right
Here
Download this Net book from under the CD&D#1 title for the PDF. CDD stands for classic Dungeons and Dragons. So what's the big deal about a collection monster stat blocks? Well this one happens to be every available monster that appeared in the classic AD&D first edition books. This taps out at 103 pages and includes everything you could want from most of the major books with 'gasp' an index! That's right these are not simply in alphabetic order but indexed as well.
That Stat set up is done in the classic style and for an example we get the following:
ABOLETH: AC 4; MV 30’/180’; HD 8; hp 8-64; THAC0 12; #AT 4; D 1-6/1-6/1-6/1-6; SA
Enslavement; SD Darkvision 60’, Slime; SZ L; Int High; AL LE; XP 1,275+10/hp. (MM2) It's all there in black and white along with the monster's appearance. For those of us who are DMing AD&D first edition or even the retroclone version such as Osric this is great. It means that in one volume we've got everything we need to ruin a PC's day in one place. The thing to remember as well that this is a net book and probably used by Scott in his own games as well. So it's free and its a great netbook to own especially if your dealing with AD&D first edition.
The font is easy to read and all of the usual suspects are there in one place with pretty solid cover from the old AD&D colouring book.
So far nothing out of the ordinary but there are other reasons for downloading this one.
Lately there has been a big push toward authors and OSR designers to do system neutral adventures and even fluff books. This is where this book comes in very handy. For use as a bench mark for many of the weird and woolly monsters in these adventures this netbook works very well.
Let's not begin to mention the usefulness of this book when DM's are designing their own old school edition adventures as well.
Many of these classic  monsters have appeared in many other venues as well. There have been numerous science fiction and fantasy games from the various eras of TSR which included many of these monsters over the years. Its nice to have their stats in one easy to use volume for designing and managing them in your own post apocalyptic or science fiction adventures and campaigns as well.
All in all a nice free addition to the arsenal of any old school DM. Grab it while you can.
A book like this should have come out years ago but as a friend said this is some of the best material that money can't buy. 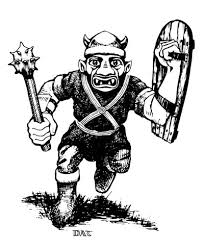