For the past 2 weeks I've been looking into a post apocalyptic movie that really doesn't get a lot of air time these days .  World Without End came out in 1955 and had a pretty solid cast to it. We've got time travel, retro future rocket ships, mutants, shiny underground survivors, science councils,etc. All of the fixings for a post apocalyptic buffet.

The real plot is very similar to  HG Wells Time Machine. Wiki had this to say:

"In 1957, Commander Dr. Eldon Galbraithe (Nelson Leigh), engineer Henry Jaffee (Christopher Dark), radioman Herbert Ellis (Rod Taylor) and scientist John Borden (Hugh Marlowe), are returning to Earth from a trip around Mars when their spaceship is somehow accelerated to incredible velocities. They are knocked unconscious, and crash land on a snow-covered mountain. When they venture out, they discover that they have become victims of time dilation and are now in Earth's future. They theorize, from seeing time-worn gravestones and after their ship's instruments register heightened residual radiation, that a devastating atomic war had broken out in 2188, and that they are at least 200 years past that date. (They later learn that the year is 2508.) Jaffe is particularly hard hit, as he realizes that his wife and children have long since died.
After surviving an ambush by giant, mutant spiders, they are attacked by one of two competing remnants of human society. The "mutates" (as the astronauts label them) are violent, one-eyed surface dwellers who live in a primitive hunter-gatherer society. They have mutated due to generations of exposure to radioactivity and have enslaved the normal humans who dwell among them.
Seeking shelter from the mutates in a cave, the four men discover the entrance to an underground city, whose residents are the descendants of those who fled there from the atomic war. These people live in a high-tech, sophisticated culture. They are a peaceful group, led by Timmek (Everett Glass), the president of the ruling council. Underground, the men have grown feeble and nearly sterile, while the women remain physically vital and ready for romance. Elain (Shirley Patterson), admires a shirtless Herbert Ellis, commenting that the astronauts are "more masculine than our men". Deena (Lisa Montell), rescued from the surface as a child, falls in love with Ellis.
The astronauts try to persuade the underground people to arm themselves and return to the surface, but are unsuccessful. They are content with their comfortable existence.
When Timmek's daughter Garnet (Nancy Gates) shows she is attracted to John Borden, Mories (Booth Colman), a member of the council, becomes jealous. He retrieves the astronauts' confiscated weapons, but has to kill a man when he is caught in the act. Mories plants the guns in the astronauts' quarters, then blames the murder on the newcomers. On finding the weapons in their quarters, Timmek orders the astronauts expelled, but Deena testifies that she saw Mories hide the guns. Mories flees to the surface, where he is quickly killed by the mutates.
With Timmek's full cooperation, the astronauts have a bazooka manufactured and head back to the surface. Fleeing the deadly bazooka fire, the mutates take shelter in the caves. Borden offers to fight their chief, Naga (Mickey Simpson), in single combat for leadership of the mutates in order to save the non-mutated surface dwellers from Naga's threatened slaughter. Borden slays Naga and orders the remaining mutates to leave. The astronauts then establish a thriving settlement, including members of both groups."

World Without End has a all of the trappings of a classic with weird mutants, science councils, etc. The film is actually rather tight and well done for the time. There's lots to mine here. The major cities of the world and their environs are perfect relic hunting grounds.  There's also any number of unseen mutant species and races running around. Plus the usual vault survivors and the science councils who seem to be all knowing and very dangerous themselves.

Then there are the ladies! Those show girl like examples of the human female. This has always bothered me, where the hell do those pretty females come from in these movies? For that matter what is up with those damn science council members? Why are they also such scumbags? The answer is actually pretty simple, their all created Eloi.
The Mutant Future wiki has an excellent example of the Eloi. From The Mutant Future Wiki: The Eloi are a race of meek, delicate humans, who are the descendants of the social elite. Generations of having every and all needs taken care of has resulted in them becoming vary docile and hedonistic. They are also not really smart, nor are they considerate of others. In their isolated, well hidden communities, they live in a perpetual bliss of drug-induced fantasies and sexual orgies. In the wild, they are just helpless animals to more savage creatures, who see them as easy pray. Some industrious creatures (like Morlocks) would provide all their needs -- from food and shelter, to drugs and protection. The only price is that they are nothing more then human livestock. Do to their unearthly beauty, docile nature and willingness to preform any carnal act, they have become highly valued sex-slaves.

Then we've got the science council here as well. They're a group of Hyper Eloi if there is was one. These folks are also from the Mutant Future Wiki


Hyper-Eloi are a class of Eloi who have developed a degree of "super conscious." They are considerably more intelligent then normal Eloi, and they consider their own judgement and morality to be superior of all other races, but they are actually quite arrogant, aloof, and self-righteous. They may ignore the plight - the starvation; the brutality; the human-condition - of the outside world, but those that don't, would ether force outside to conform to the methods that allowed is type of Eloi to become Hyper-Eloi, or to exterminate the "animal-like savages" like vermin. In the later, they would rather breed a race of super-soldiers to carry-out the extermination, then to do it themselves."


You can find all you need to know about the Eloi over at the Mutant Future Wik Right Here
About those mutates? Simply another variation on the old Morlock template

You can bet your life if there is one mutant species there is a who bunch of others.  World without End makes an excellent end cap for a Mutant Future/ Star Ships and Space Men second edition game.

A Quick Note On Gear

The gear of World Without End looks straight out of WWII surplus. Could there be another reason for this?  I've seen at least 8 movies from the 50s, 60s, and 70s that had this strange retro vintage look.  Perhaps these are worlds where conflict had already been a way of life. Much of the same gear is seen in the PD movie Rocketship XM. You can read about that one right over Here
Much of the gear is standard in both the Mutant Future game book and the second edition Star Ships and Spacemen book.

World Without End's Time Line
There's something really odd about the timeline of World Without End.  As you've problaby noticed the time line of World  Without End is steeped in Cold War paranoia and fear. This is the same fear that echoed throughout the 50s through the 90s. Yet to me its one that might be glimpsed in HG Wells The Time Machine and the Geogre Pal movie later. Could this actually the world we've seen in movie/book Things To Come another Well's Creation? Could this time peroid be another alternative of  the same timeline? Details of  my thoughts about Things To Come can be found right here 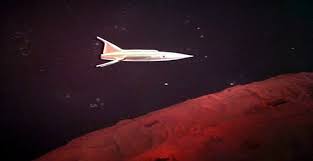 One interesting bit is that we've got a number of primitive nuclear rocket drives being used by those astronauts in these 50s & 60s movies. I'm reminded of Edgar Rice Burroughs Lost Continent. There were some really odd echoes between ERB and Wells in that one.  Could there be an entire post apocalyptic timeline that PCs might explore? Sure there could and you can see some of my musings on that one right Here
A random encounter chart for World Without End might look something like this.