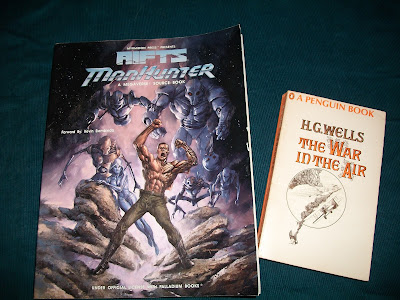 Scored two items today in the local Thrift Store. The Rifts Manhunter is in nice shape  and the HG Wells War In the Air is great as well. But what concerns me is Rifts Manhunter. I've had the game book in the past and ordered it from an add in Dragon way back in 1994.
The add described the following:

Rifts Manhunter is a dimension book that brings the Manhunter universe in contact with the Rifts universe. The 200-page book includes information on the Manhunters, their history and their models. The book also includes:

- 20 new O.C.C.s including the Widowmakers, Cannibals, Smokers, Choirboys, Drivejocks, Bloodletters and Chrome Warriors
- 11 new alien races, such as the Aglians, Kirn and the Ulars.
- Information on the colonies, organizations and corporations in the Manhunter universe.
- New weapons, equipment, vehicles and body armor.
The problem was that the game book was well broken in several places. The book setting is basically the new Battle Star Galactic meets the Federation with a weird background. Described as this:

"The Manthunter RPG by Myrmidon Press was basically an RPG about bounty hunters in a lawless, dystopian sci-fi setting where known space is divided up between a pragmatic and bureaucratic federation of intelligent space faring races, a militant empire headed by a fairly typical example of the "honorable warrior race" sci-fi cliche, and a loose confederacy of corrupt and Machiavellian human colonies that refused to join up with the main federation when it formed a few centuries back. The Manhunters themselves are a robot army that went rogue and refused to stand down after the end of a war they were created for, and have since fled into unexplored space to build up their numbers so the can continue their mission to contain the human race"
The book clocks in at 178 pages and was originally its own game with some pretty nifty ideas in it.

There were originally three editions of the game. The whole game has this weird quasi 70s grindhouse feel to the setting. " Multi-racial science fiction in a setting that covers a broad range of tech levels. The ATPDS (Aglio-Terran Planetary Defense System) attempts to make it's way in a universe of competing alien powers and vicious robots called Manhunters who seek to eradicate life." vibe echoes throughout the book. So it could reasonable be used for a Stars Without Numbers game with very little modification. The robots are really nasty. The "classes" could be used whole sale and the game these days isn't well known at all. 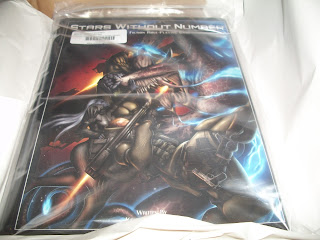 Ten Reasons To Use Rifts Manhunter As A Stars Without Numbers Resource
The book is relatively cheap on Amazon and ebay going for 2.00 or less. Thanks To Green Skeleton Gaming Guild for the idea on this one.