There must have been something in the air or the water of the world of 1951 because this classic was released along with a whole bunch of other sci fi classics.
According to wiki :
Invaders from Mars, The War of the Worlds, both released in 1953, and The Thing from Another World (1951), all began production around the same time this film was made. The Day the Earth Stood Still is a close parallel, finishing production six months before this one, in the summer of 1951. 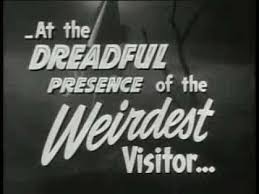 The man from Planet X pretty much has it all. Weird aliens,  moody backgrounds, and tons of atmosphere.


The plot line goes something like this  according to wiki :

A spaceship from a previously unknown planet lands in the Scottish moors, bringing an alien creature to earth near the observatory of Professor Elliot (Raymond Bond), just days before the planet will pass closest to the earth. When the professor and his friend, American reporter John Lawrence (Robert Clarke), discover the creature, they help it when it is in distress and try to communicate with it, but fail. They leave, and the alien follows them home. A colleague of the professor, the unscrupulous and ambitious scientist Dr. Mears (William Schallert), discovers how to communicate with the creature and tries to get from it by force the formula for the metal the spaceship is made of. He shuts off the alien's breathing apparatus and leaves it for dead, telling the professor that communication was hopeless.
Soon, Lawrence discovers that the alien is gone, as is the professor's daughter, Enid (Margaret Field). Tommy, the village constable (Roy Engle), reports that others from the village are missing as well. Lawrence takes the constable to the site where the spaceship has been, but it is no longer there. With more people now missing – including Mears – the phone lines dead and the village in a panic, they get word to Scotland Yard by using a heliograph to contact a passing freighter.
When an Inspector (David Ormont) and sergeant fly in and are briefed on the situation, it is decided that the military must destroy the spaceship. Lawrence objects that doing so will also kill the people who are under the alien's control. With the mysterious planet due to reach its closest distance to the earth at midnight, Lawrence is given until 11:00 to rescue them. He sneaks up to the ship, and learns from Mears that the alien intends the ship to become a wireless relay station in advance of an invasion from its home planet, which is dying. Lawrence orders the enthralled villagers to leave and attacks the alien, shutting off its breathing apparatus, then escapes with Enid and the professor. Mears, however, returns to the ship and is killed when the military destroys the ship, just before the planet approaches and then recedes back into outer space.

At first glance there doesn't seem like there's a lot that can be done with this film. Actually there's lots to mine here. The whole isolated Scottish village plot could be used as a simple one night Rpg con adventure set. Quick easy stat up for all of the villagers and the man from planet X himself and your ready to go. 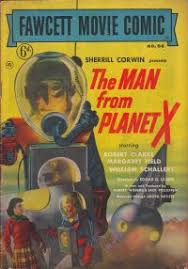 There's more here then simply that we've got the whole scout fir an invasion from another world to play with. The comic book by Fawcett had some interesting insights into the alien. The ship uses an atomic drive,antigravity motors, and has a very interesting array of equipment. The energy beams, mind control mechanisms, and other machines aboard the Mr.X's ship seem more likely something one would find on a scientist's ship rather then a warrior's ship. 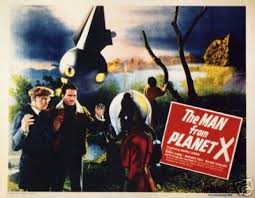 Using The Xians in any of the retroclone games is a simple matter. The greys from X-plorers are a great stand in. Simply convert over the language to a music base and your in business. For Swords And Wizardry it would look something like :
Man From Planet X (Scientist/Warriors )
Armor Class: 6 (13)
Hit Dice : 2
Attacks : Mind Control Ray save vs wands or be charmed, Beam weapon 1d4
Specials: Immunities, Paralysis
Move : 9
HDE/XP 3/60

Stars Without Number has the Grays also built right into the system. This race could show up in Mutant Future very easily and be conducting experiments on mutants,recovering relics for scientific study, or planning another invasion. 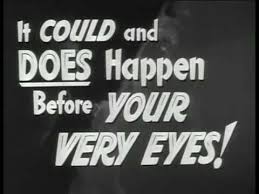 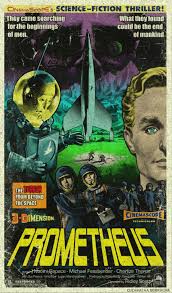 This poster recently showed up on the internet and has become a viral bug during the hype leading up to the movie.  It does present a very viable option that wasn't explored in the movie. Since "The Man From Planet X "was the advanced scout for a coming invasion because his planet was dying then its reasonable to assume that its still out there. The race has advanced anti gravity and black hole technology allowing it to roam the universe in search of viable planets to invade.
If the race is gone then it stands to reason that a scientific exploration mission to explore the mega dungeons of this world might be an option. The technological cache would immense. The value incredible but you'd better have a scientist/bard with your party since all of their technological and language is musically and mathematically based. There might also still be members of the race in stasis waiting for another opportunity to invade. There are many options for this race in the coming campaign as well.
There could well be pissed off survivors on Planet X still searching for another colony world to conquer and conduct their mad scheme of mind control madness