There are some films that are so horrible as to be fantastic. This is one of them. First Space Ship on Venus is one such film. Behind the iron curtain during the 60s anything science fiction was hot because the space race with America was in full swing.


According to wiki :
"First Spaceship on Venus, German: Der schweigende Stern (en: The Silent Star), Polish: Milcząca Gwiazda, is a 1960 East German/Polish science fiction film directed byKurt Maetzig and based on the novel The Astronauts by Stanisław Lem. The film is also known as Planet of the Dead, Silent Star, and Spaceship Venus Does Not Reply.
A much-shortened 1962 Crown International Pictures English dubbed release in the USA used the name First Spaceship on Venus where it was double billed with Varan the Unbelievable." 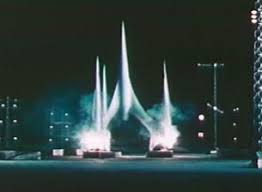 The film has been lampooned countless times. Again according to wiki :

One would think that there would be absolutely nothing to mine from this movie. Check out the plot :
The film begins in 1985, when engineers involved in an industrial project to irrigate theGobi Desert accidentally unearth a mysterious and apparently artificial "spool." When found to be made of a material unknown on Earth, the spool is circumstantially linked to the Tunguska explosion of 1908. The "spool" is seized on as evidence that the explosion, originally blamed on a meteor, was actually caused by a spaceship. Professor Harringway deduces the alien craft must have come from Venus. The spool itself is determined to be a flight recorder, and partially decoded by an international team of scientists led by Professor Sikarna and Dr. Tchen Yu. When radio greetings sent to Venus go unanswered, Harringway announces that a journey to Venus is Earth's only alternative. The recently-completed Soviet spaceship Cosmostrator I (Kosmokrator in the original), intended to voyage to Mars, is redirected to Venus, a 21 day trip. During the voyage, Sikarna works furiously to translate the alien message on the disc using the ship's computer.
When the ship nears Venus, radio interference from that planet cuts the crew off from Earth. By then, Sikarna's efforts lead to a stunning discovery - the spool describes a Venusian plan to irradiate the Earth's surface, with the extermination of mankind being the prelude to an invasion. Rather than a "cosmic document" as had been expected, the spool bears a cold-blooded message of destruction. Harringway convinces the crew to press on towards Venus rather than return to Earth with news that would cause panic.
With the ship's robot Omega, American astronaut Brinkman pilots a one-man landing craft. On the ground, he encounters an industrial complex and finds small recording devices that look like insects. The rest of the crew follow when Cosmostrator lands, but find no Venusian life forms. Journeying across the planet, they find the remains of a deserted and blasted city centered around a huge crater - signs of a catastrophic explosion so intense, shadowy forms of humanoid Venusians are permanently burned into the walls of surviving buildings.
While the Venusians are gone, their machines remain functioning, including the radiation-bombardment machine intended for Earth. One of the scientists accidentally triggers the radiation weapon leading to a frantic effort by the Earthmen to disarm it. Tchen Yu lowers Talua - the ship's communication officer - into the Venusian command center. When Tchen Yu's suit is punctured, Brinkman goes out to save him. Before he can reach Yu, Talua succeeds in reversing the radiation weapon. Unfortunately, this reverses the planet's gravitational field, flinging Cosmostrator into space. Brinkman is also repelled off the planet, beyond reach by Cosmostrator, while Talua and Tchen Yu remain marooned on Venus. The surviving crew members return home, where they warn the people of Earth about the danger of atomic weapons. 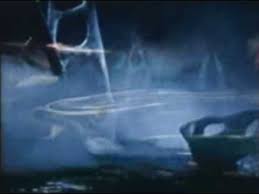 The Ruins of Venus
The Venusians of this picture are down right nasty. This is an entire world of ruins, A.I. run plants, and god knows what other secrets are down there. Seriously this is one screwed up planet.

The whole place is an atomic wasteland filled with every type of wasteland horror you can think of. Vaults of still running machines, weapons plants still producing armaments for warriors who will never come. Nightmare mutant species of monster s slinking through the pollution choked landscape. And doomsday weapons waiting for some damned fool to activate them. 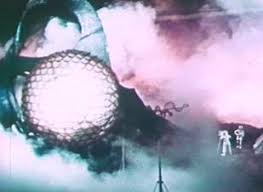 This means that there's a whole planet of horror just waiting for party of explorers to get back to its vaults. There could be anything on that planet from vast unexplored vaults to temples to god knows what. Recently a friend of mine was discussing this film with me. He stated that Its plot line was very similar to  the recent Prometheus. Ancient astronauts, evidence found on Earth, still active weapons systems, a vast military engine that has outlived their creators. All the usual tropes are there.


The vast atomic wasteland of Venus is ripe to be explored. There are likely to vast hordes of undead Venusians just waiting for some helpless party of fools to stumble upon the warlike race's artifacts. This place has the potential to be Lovecraftian dungeon works of  incredible proportions. Everything that we see in the film is atomic based technology. Who could have given the Venusians that level of technology so that they could raise up to that level by the time of the 1900s of this universe  Two choices immediately come to mind. The Great Race certainly had that level of technology and Lovecraft had written about Venus already. Then there is of course that trouble maker of the Outer Gods  Nyarlathotep. He supposedly gave mankind the secrets of atomic weaponry.
Then there is the little matter of the left behind crew members still trapped among the atomic horrors of this planet. A mission must be mounted to save them!

How will I use the First Space Ship On Venus? Well I won't be setting this on Venus at all. The planet will be moved well out of the Solar system. This is way to good of an opportunity to waste it. You could put the planet in another stellar system entirely and still have a perfect setting for either X plorers or Star Ships and Space Men Second edition.
For a game like Terminal Space this place is perfect to be a campaign's Undermountain. A vast megadungeon that yield's rich artifacts and rewards. But this place deals death with much more frequency. Terminal Space has the edge with D&D's spells which might give an adventurer a fighting chance.


For a game like Stars Without Numbers this a place of ultimate horror. Here rogue A.I.s still battle with one another and the horrors of the wasteland are all too real. This is the type of place that might have far flung colonies and its alien horrors are still roaming the universe. This universal horror is dangerous, unpredictable, and still very active. A pulp science fiction bogeyman that can strike at any time. The psychic powers of SWN might make finding these left over war machines top agenda. The Lovecraft angle only adds to the horror of it.
For Carcosa this might be a possible origin point for some of the space aliens that have resettled on Carcosa. Perhaps they've left behind a more horror filled existence then the one on Carcosa.
Anyhow judge for yourselves.