Yithaoan isn't on the normal space charts because its a forbidden world. During the war with the with the flying polyps & the vast intergalactic struggles with Cthulhu's foul brood certain worlds became battle grounds were the weapons of the Yithians were released. These weapons caused the world itself to shift completely out of faze with the normal universe. Since then vast fungal varieties have spread across the face of this world. Many believe its because of the remains of the corpses of the  polyps & the remains of Cthulhu's brood that such bizarre fungus thrives.
More frightening is the fact that several varieties of fungus still survive there.


This is however a rogue world seemingly unhinged in the time space continuum itself! It appears when, where, & at its own whims. Several Yithian cities can still be seen across the face of the world. Power, lifeforms, etc. all indicate the presence of  thriving cities yet all the explorers have found is horror death & destruction waiting for them on the surface. This world claims many more victims each year as the remains of space ships floating in orbit indicate.
As an Earth Type variety A-2 world, Yithaoan  also boasts several varieties of mutated primitive dinosaurian  life forms which some scientists speculate may have been transported to the world millions of years ago. 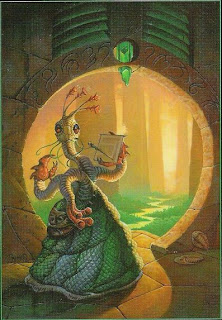 Repeated what seems to draw all manner of treasure hunters to this world is speculation of a working but malfunctioning Yithian Time Tunnel being run by a mad Alien Intelligence slaved to said device. Examples of what may lie waiting here can be found Here
The fact that strange dimensional weather related events happen every 72 hours with some regularity isn't a concern to the inhabitants.Table-d30-Damned-Thing
Wild Encounters  Roll 1d10
Deep Wild Encounters Roll 1d10


Those who land here have a 48 hour window before the world begins to fade back into the Outer Darkness surrounding the time space continuum but some of have said that the world actually fades into the human subconscious. There is speculation that the world also has a malevolent streak & lies in wait sending out strange dreams to those whom it deems worth of its attentions.

The siren call of the planet always attracts the foolish, the desperate, & the adventurous. It most always ends badly!

Inspired by Hothouse
Posted by Needles at 6:32 PM