I've been reading about the Thing Prequel - Which as you all know was adapted from the original novel Who Goes There! A group of scientists at an artic weather station happen upon an alien life form that begins to take over the base & hijinks occur. I was hooked. I own Barlowe's Guide To Extra-terrestrials. I knew what the alien from the story looked like! It looked like this 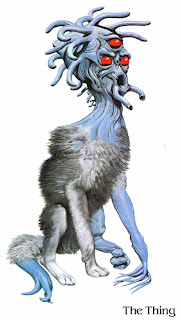 That was until the film came out by John Carpenter! A film with so many WTF moments that I was hooked especially when I saw this! The film was bleak, nasty, & stays with you! I'm thinking that the thing was done with me. Nope Dark Horse Comics came out with a series that simply expands on the original.It tells what happens to the main character & continues to explain a great many more Things! Me I've been hiding over in plane site at Outpost 31 This is perhaps the single greatest resource for Thing related info. Seriously this site is packed
So now its 2011 & One Thing leads to another!
It looks very very good in my opinion. What does this really have to do with the OSR?
These are simply some suggestions & ideas off of the top of my head. I'm very excited about this up coming movie!