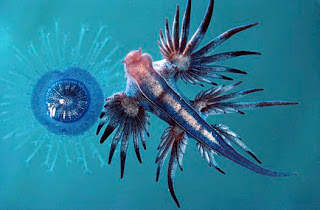 
Floating among the astral eddies of the Outer Darkness are special beings that exist between the higher Great Old Ones & the Forgotten Ones. These beings feed off of the viscous planar slime that collects between the psionic power of the Great Ones & the multi planar existence of their higher selves.  They may be summoned by the 6th level super science power summon planar demon.  This species floats upside down on the surface tension of the Outer Darkness & the astral simply feeding when & where it wants too.
Some of the more radical biology of the creature includes:  A tapering body which is flattened and has six appendages which branch out into rayed cerata.
The Ch'laraotus is able to feed on many of the Great Old Ones  due to its immunity to the venomous nematocysts & strange c-cell concentrations that are active for thousands of years. The slug consumes the entire organism and appears to select and store the most venomous nematocysts for its own use. The venom is collected in specialized sacs (cnidosacs), on the tip of their cerata, the thin feather-like "fingers" on its body. Because The Ch'laraotus stores the venom, it can produce a more powerful and deadly sting than the  upon which it feeds.
Many of the mythos races fear The Ch'laraotus & will flee rather then face this strange race. They are not intelligent per say but have a sort of temporary instinct that makes them appear to act in a rational manner. They are actually acting in a forth dimensional fashion which allows them to "see" several seconds into the future.
Though certain scientists insist that these entities are related to the Moon Beasts from the Plateau of Leng. See here Moon-beast they may be closer to the Hounds of Tindalos. The The Ch'laraotus will happily feed on both entities if given the chance.
The Beings From Thacharub are over 12 foot long & weight in at around 2 tons. They are often summoned for the the alchemial element  Merrallia which comes from the 3rd lobe of their central brain located in the torso of the creature. The drug grants a user freedom within the local time space continuum & an illusion of eternal life which is actually the user becoming unstuck in time. The loss of identity & definition within time is on of the more common side effects of this drug.. Harvesting the liquid is very tricky given the fact that the tips of the creature do 1d10 points of damage. A save vs death is required should a character receive the slightest scratch from the Ch'laraotus.
The Ch'laraotus may be persuaded to give up some of their poisons while among the deadliest in the multi-verse are also some of the most powerful healing potions known. They have been known to restore the dead to a semblance of life when used with certain super science powers. As long as the corpse is not more then 1d4 hours old.
Finally these entities are often used as spies or guardians, they may be fixed to a certain location & allowed to drift on astral tethers for centuries. They will telepathically communicate any disturbances within their locations & can act accordingly. Those who have prolonged mental contact with them will suffer from a form of mental brain rot & this may only be cured with the application of super science.