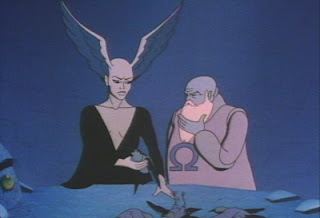 Light Years was released in 1988 & blew me away & still does.  The original version was directed by René Laloux, and was based on Jean-Pierre Andrevon's novel Les Hommes-machines contre Gandahar (The Machine-Men versus Gandahar).

The plot is basically an issue of Heavy Metal come to life  & so is the artwork!

The paradise world of Gandahar is threatened by a mysterious power, so Queen Ambisextra and the Council of Women send the warrior Sylvain to scout for this danger. He discovers metallic humanoids with a paralysing ray who send the bodies of those they capture through a portal. Later these individuals return, also encased in metal.
Airelle serves as the love interest for Sylvain. He meets "The Deformed," a group of mutants who Sylvain at first mistakes for the enemy.
The cause of this terror is traced to the giant brain Metamorphis, although Metamorphis is puzzled about how he could be the cause. The metal humanoids are coming back in time from the future, so Metamorphis offers to place Sylvain in stasis until that time. Sylvain awakens in 1,000 years as planned, and destroys the old, weakened, and now insane, Metamorphis. 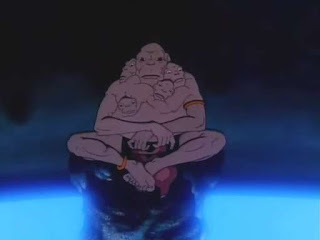 This isn't a kids movie at all. Between the visuals, the nakedness, & the bizarre inhabitants of the film. Its pretty much within a league all of its own.
What is there for the Dungeon Master to mine though? The answer is lots. 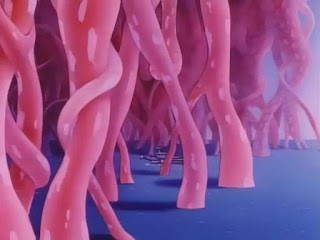 Largely we had blueish humanoids, a group of rejected deformed who lived underground (as it usually goes with mutated folk), mysterious black metal men, and various species used as vehicles and housing. Weapons were all biological, but not in the way you would think on earth. One such weapon, for example, would grow like a tree, really fast over 10 seconds, then turn to stone. Sprinkle a field with these, and you essentially force ground troops to have to tunnel through stone to get to where they want to go.
Between the vehicles, the background designs, the mutants, etc. There is enough material here for about three campaigns.
This is the actual plot of the film -.Life in the idyllic paradise of Gandahar seems peaceful and in joyous order, until the Mirror Birds report that inhabitants of whole villages have been turned to stone. A council of women chooses Sylvain Lanvère to uncover Gandahar’s mysterious metallic attackers. In doing so, he finds an underground race of deformed Gandaharians and an oversized motherbrain, both the result of botched genetic experiments.

Based on an original story by Jean-Pierre Andrevon, and a huge hit in France at the time of its release, it combines Laloux’s famous imagination with that of animation designer Philippe Caza. Gandahar is a fascinating, adult animation which examines genetic mutation, the importance of organic farming, and urges a respect for nature that resonates today more than ever.

A certain scene in the English version was edited due to sexuality – the scene where Airelle and Sylvain are in the nest. In the uncut version, Sylvain is shown removing his shirt, later, he and Airelle are shown lying nude in the nest at night, seemingly after having been intimate with one another.

I love the sense of style that we see in this animated film, there's a sense here that its as if a story from an issue of  Heavy Metal came to life & we're seeing the results. The animator will never make another film unfortunately.  Information on Rene Laloux can be found Here
Gandahar reminds me of Frank Herbert's Dune series. If you like Dune, Blade Runner, Star Wars, The Matrix, or any George Lucas film, then this movie is definitely worth a watch.
A quick search will turn up the film in parts on youtube
Posted by Needles at 11:45 AM