First appearing in 1981 Outland is a movie almost in the same vein as Alien. Set in the shadow of  IO this a fantastic movie that today gets over looked, if mentioned at all. Its basically a western set in space but a clever western. Here's some more information on the plot -Marshal W.T. O'Niel is assigned to a mining colony on Io, one of Jupiter's moons. During his tenure miners are dying - usually violently. When the marshal investigates he discovers the one thing all the deaths have in common is a lethal amphetamine-type drug, which allows the miners to work continuously for days at a time until they become "burned out" and expire. O'Niel follows the trail of the dealers, which leads to the man overseeing the colony. Now O'Niel must watch his back at every turn, as those who seek to protect their income begin targeting him.

However the real star of Outland was the  comic strip adaptation of Outland illustrated by Jim Steranko appeared in Heavy Metal magazine in the June 1981, October 1981, and January 1982 issue.

The setting, issues, etc. would make the perfect setting for a Human Space Empire, X-Plorers, or Terminal Space Game.

Personally I love this film & why it gets written off is largely a crime because its not simply another western in space. 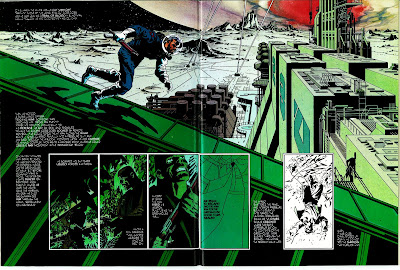 The art is up to the standards of those seen in Heavy Metal & among my favorites! Enjoy
Posted by Needles at 9:32 AM