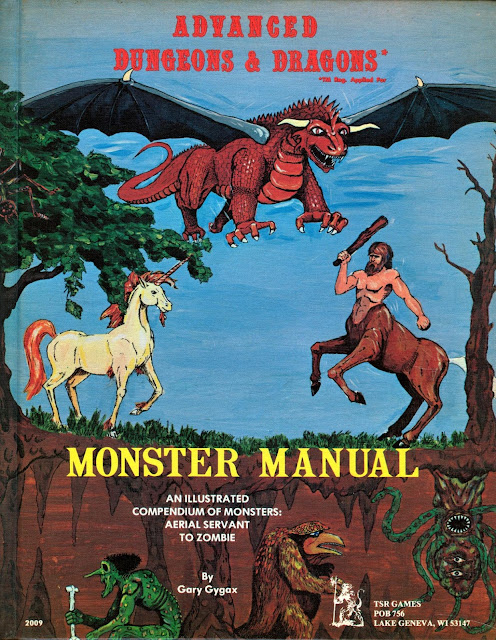 "Juiblex is deemed a lesser figure in abyssal hierarchy, judged Lord of Nothing by his peers. However, in my research, I have plumbed the foul mire to examine the full darkness that is this disturbing fiend. 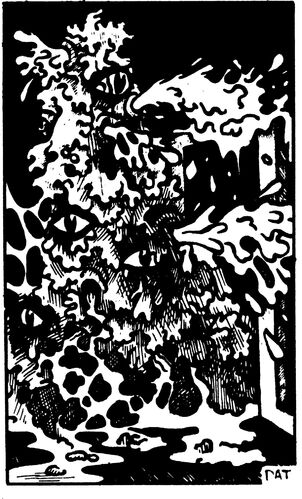 If there are heavy metal & death metal bands of adventurers roaming the wastelands raiding dungeons what happened?!  The big three Abyssial powers of the demonic lords Orcus, Juiblex, & Demongorgon are vying for worshipers, pacts, cults, & having demonic warfare with each other through proxie agents the world as we know it is going to be a mess. After having used The Metallic Tome now for several months for actual play what would a metal band of Juiblex even look like?! Could such a band of adventurers or agents of demonic power actually thrive in such an environment?!  Those sons & daughters of Juiblex are going to bear the mutations of oozes, slimes, jellies, puddings, and amorphous creatures. 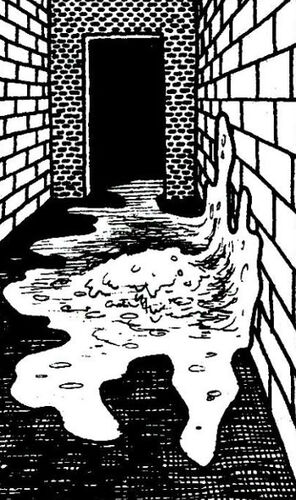 Covid really has taken its toll on a lot of my OSR rpg efforts including pursuing a bit of writing I've been doing when it comes to messing with  Castles & Crusades Tome of the Unclean & The Demonic Tome by Rafael Chandler. 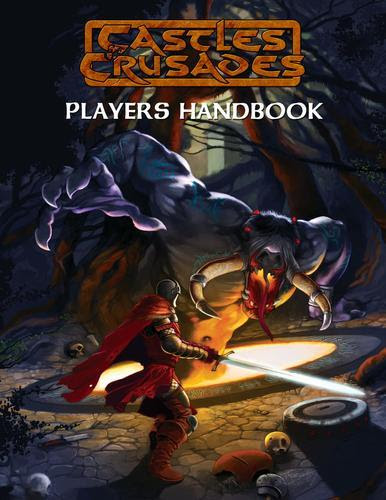 So is Castles & Crusades a good fit for an rpg system for both  The Demonic Tome by Rafael Chandler &  The Metallic Tome?! Ultimately I think so. The scions of  Juiblex are ultimately rewarded by being turned into some of the more intelligent slimes, jellies, and oozes such as the slithering tracker.
The slithering tracker knows & understands languages, it possesses an alien intelligence, & it has a demonic nature about it; "The ritual required the target to be willing and to be motivated by revenge. In the ritual, all the moisture from the target's body was drained, but their mind still lived on in it. Some considered this ritual a dubious origin for the slithering trackers, instead proposing the alternate theory that they were merely an advanced form of other oozes."

Its implied to once been human but having left its humanity far behind ages ago in service to the 'faceless lord'. The heavy metal music of Juiblex is alien, demonic, & highly dangerous to the sanity of the world. 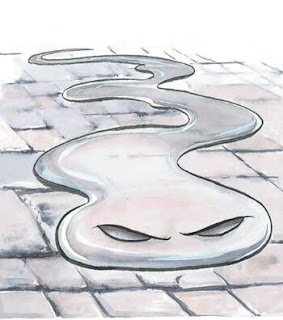 But how did the world come to this?! For that we dive into Dread: The First Book of Pandemonium rpg & a review of that game which reveals the events of  Sunday May 13 in Haywood, Oklahoma; "This change occurred on the night of Sunday May 13 in Haywood, Oklahoma. They went to bed that night. The next morning the entire population was dead. Slaughtered or suicide. Some of the deaths were extremely gruesome. Suspicion began with some type of gas attack by terrorists, but no evidence could be found to support this. It was inconceivable…until it happened again. At various locations around the world, the scene repeated itself. Since then, unexplained disappearances and phenomena have increased, as has seemingly pointless violence.

Characters have suffered tragedy before the game begins. Through circumstances beyond their control (or not beyond their control), they have reached the nadir of their lives. Things couldn’t be much worse, until something not of this world tried to kill them, or something unexplainable happened, and someone was there to save them. To take them in and bring them back. A Mentor to train them and give them purpose again. The Mentor made them part of a group with other Disciples like themselves, called a Cabal. The Mentor also explained the truth of May 13; that on that night the barriers between Earth and Hell dropped briefly. The same occurred later in other locations, releasing an unknown number of Demons into the world."

That game was the basis for the Demonic Tome's setting & background both are written by Mr.Chandler.  But what does it tell us about the alien agenda of Juiblex itself?! Quite a bit, we know its going to be going all out to foil the plans of its rival demon lords, this thing is a full on lord of chaos, & given its Abyssial nature there is no hiding its Chaotic orgins. This faceless demon lord  is also a part of the Tharzidun meaning that it has reason to smite the angels of this Earth at every turn; 'Juiblex's true origin was unknown, although there were many theories about where the Indescribable Darkness originally came from. At earliest, he was one of the original tanar'ri, somewhere around the age of Demogorgon, but many posited that he was far older than that.[29] The obyrith lords Dagon and Pazuzu suspected that Juiblex was himself an obyrith lord who was mostly destroyed by Tharzidun, gradually declining in importance until eventually becoming an ancient relic of the past.[4] Some cited the presence of certain obyriths on Juiblex's plane as a sign that he came before the tanar'ri, although this wasn't concrete evidence.[30]

According to the research of some, Juiblex was originally just part of the Elemental Chaos, part of its raw essence until the appearance of Tharzidun. When Tharzidun first planted the seed of evil, it wounded the Elemental Chaos, and at the direct site of the wound was the first mass of infection, a black, bilious collection of fluids and solids awakened to wicked self-awareness."

Cultists among humans are going to be the worst examples of humanity & any pustules or covens of Juiblex worshipers are obliterated by both Control or Angels when found;"His worst worshipers tried desperately to earn his attention, spreading terror, despair and death in the hopes of appealing to Juiblex.[3][25] The madness of Juiblex's wretched supplicants was often rooted in desperation born from sickness, physical or otherwise, terrible afflictions that brought their victims such pain that they were willing to turn to the Demon Prince of Ooze.[4][25] After reaching the heights of depression, the deluded madmen, often humans, turned to the Glistener in the hopes that he could cure them or, failing that, ruin their minds so that the pain would be bearable."

Any concerts or gatherings of bands of metal heads dedicated to the Demon Prince of Ooze are often nothing more then sacrifice events where the entire audience is turned into or infected with slimes. These events are often held underground or in abandoned sections of sewers. The bands in question are often sought by vigilante adventurer posses that seek them out to eradicate them. In the wastelands of the Metal Future these are often good paying adventuring gigs. The faceless lord is one of the most hated entities on any plane Prime.
There are temples rumored to be in Texas, California, the Mexican pan handle, Flordia, and other Southern areas of the United States. The faceless prince likes the hot climates & area of the United States's jungles & fetid swamps of the South American pan handles. 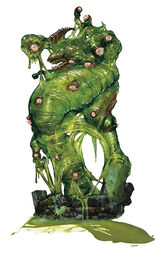