Review & Commentary On Crimson Blades 2: The Dark Fantasy RPG By Simon Washbourne From Beyond Belief Games For Your Old School Campaigns

" With a familiar yet different set of rules, Crimson Blades gives you fantastic old school-style dark fantasy/sword & sorcery role-playing. You can be a brooding sorcerer with a demon blade, a savage barbarian with an equally savage panther companion, a grim tomb-robber seeking the riches of a long-dead empire or even a Dendrelyssi - one of the last members of a decadent race of necromancers looking for redemption in the lands they once ruled.

Included in the game are seven human character classes: Barbarian, Fighter, Griot, Mountebank, Sorcerer, Thief and Wayfarer plus the inhuman Dendrelyssi. There are also four NPC classes: Fleshcrafter, Merchant, Royal Redeemer and Witch. The book includes the traditional rules for spell-casting as well as rules for summoning and binding demons, elementals and undead.

Included in the book is a brief setting "The Crimson Lands" for you to use as the basis for your own campaign." 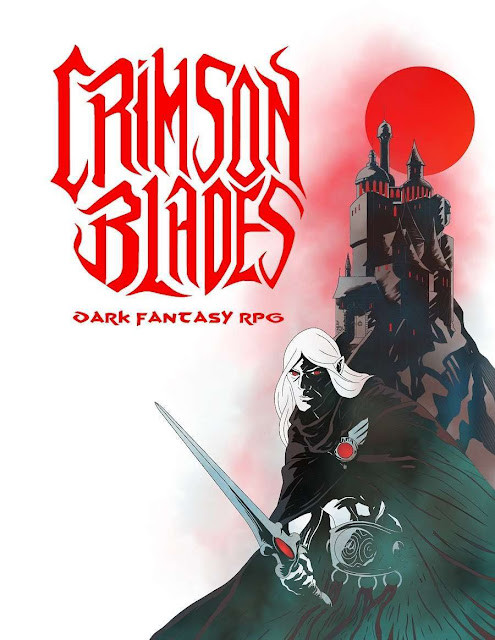 Simon Washborne of Beyond Belief Games contacted me on MeWe & reminded me of the fact that he's got an OSR game that has ton of Michael Moorcock like features about it called Crimson Blades. Now this is a neo  retroclone that came out in 2016. Now this game has been sitting on my hard drive since about that time, the best part of this game is the following statement in the OGL; "Publishing your own materials CRIMSON BLADES is all Open Game Content under the terms of Wizards of the Coast’s Open Game License version 1.0a, with the exception of artwork and the trademarks “Beyond Belief Games,” and “Crimson Blades DARK FANTASY RPG”, and all text that appears in the Crimson Lands Gazetteer. What does it mean that this game is Open Game Content? It means you can (basically) copy whatever parts of it you want, add your own content, change the content around, and publish the result. You have to comply with the terms of the Open Game License, which is reproduced below. If you don’t care about mentioning any of the game’s trademarks, that’s all you have to do. "  That's right an actual Swords & Sorcery game that I can publish with that doesn't have to go through a garage band publishing commitee! The bane of my existence as a writer/designer/creative person doesn't have to have a peer review by bunch of someones looking for their latest kickstarter!
What you do get in one hundred & twenty six pages is an actual workable Sword & Sorcery gaming system that's set within an alternative universe style Solomon Kane world. The character creation is straight forward & there are little tweaks here & there. The layout is clear & crisp, the rules works on several levels for a Sword & Sorcery game!  This is the sort of game that Robert E.Howard fans can sink their teeth into & run a Solomon Kane Red Shadows game from especially when PC's would do things &  utter statements  like; "Slowly he rose, mechanically wiping his hands upon his cloak. A dark scowl had settled on his somber brow. Yet he made no wild, reckless vow, swore no oath by saints or devils."Men shall die for this," he said coldly."
And its this sort of clear headed cold violence that runs through Crimson Blades. The abandonment of civilization stopping just short of the edge of the map is something that we see throughout the product. This is game that takes you to the edge. The edge of corruption of magick & dark forces is a heart beat away in Crimson Blades. This isn't a game about niceties, or subtleties no this is game about seeking out the darkness & stabbing through with a saber blade point. By fire & blade the lands of adventure need to be cleansed. The PC class combination of Barbarian, Fighter, Griot, Mountebank, Sorcerer, Thief and Wayfarer plus the inhuman Dendrelyssi give the game a much more grounded & yet Sword & Sorcery feel mixed with something far more. 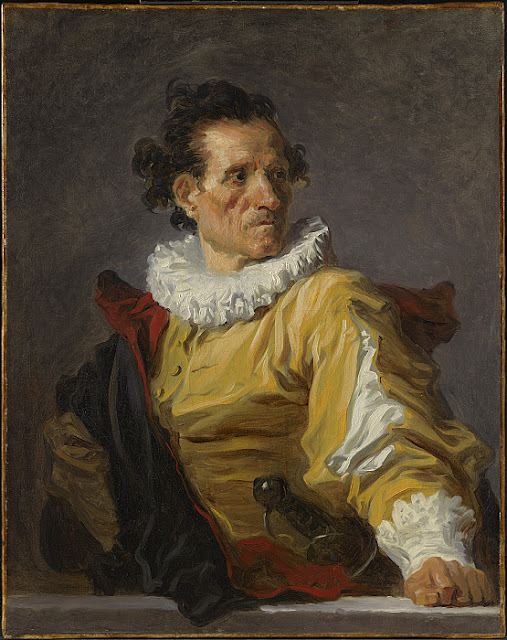 Jean-Honoré Fragonard, 'The Warrior' artwork  reminds me of the feel of Crimson Blades.

This is a solid, easy to understand, & heavily Pulpy system  taking everything to a bloody conclusion. The magick here is brutal & dangerous as its meant to be and Crimson Blades takes advantage of this. Crimson Blades has a Basic/Expert D&D rules system feel  but the game uses d6s as its base. The world of Crimson Blades is one where the old race the old race 'the Dendrelyssi' in shambles after the humans have rebelled. The whole setting feels like we as humans came after the fact. And we did. The Dendrelyssi, are the Elves of legend & mythology. Not the D&D Elves but the baby stealing, pagan god sacrificing, and uses humans as sacrifice scumbags that we've come to know and love from European legend. And Michael Moorcock's works of Sword & Sorcery fiction. And the 'the Dendrelyssi' are dying out. Does this sound familiar?! It should be cause we're cast into the Crimson lands as the setting & its not a huge sprawling affair of a campaign world. Instead its a world setting that begs to be used as the 'monsters' are left overs, hold overs, & things best left in the ovens of the  'the Dendrelyssi'. Why?! Because the Crimson land's ruins are slowly being reclaimed by the wild places & nature but they are not going quietly. On the whole Crimson Lands is/has a feel someplace left of center of the works of Robert E.Howard & Michael Moorcock with swaths of the Orientalism of the original works of Pulp writers. Is the Crimson Blades rpg worth your cash?! I think so. Crimson Blades is a solid game system with a solid base system,open rules, & a very well done package.