Its been ages since the spine of my Games Workshop Stormbriner rpg was opened in this blog entry we're going to talk about some on the spot observations from the book. 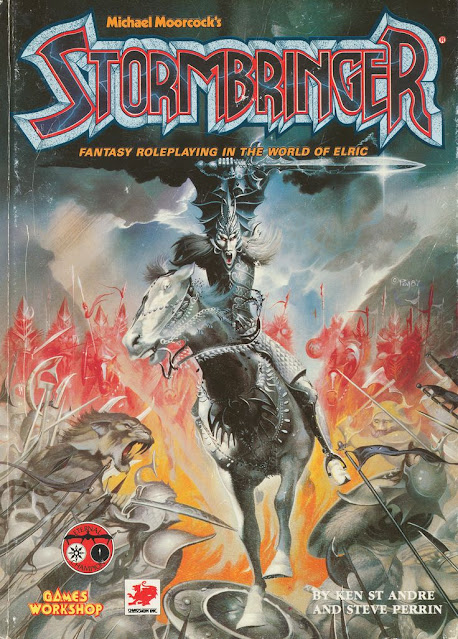 The Stormbringer rpg put out in 1987 by Games Workshop and Chaosium Inc. was typical of their collaberations of that era. Just on the cusp of the Golden era of Old Hammer Realms of Chaos & Realm of Chaos: The Lost and the Damned (1990) crossing the line of  Warhammer Fantasy Role Play & 40K. The Stormbringer Rpg represents something special. While the binding was always an issue with GW's Stormbringer Rpg game had a very distilled quality about for our games and Rpg net GW Stormbringer rpg entry bares this out; "The core rulebooks for the original Stormbringer game (not to be confused with Elric!/Stormbringer Fifth Edition, which was a different BRP game system also set in the Young Kingdoms).This is a high-power RPG set in the world of Michael Moorcock's Elric novels. A core BRP skill system and a magic system based on demons and elementals are some of the notable elements of this game.Though this game has four different editions, they're all essentially identical, with versions 1-3 largely unchanged. Version 4 was reorganized, and had some significant changes in the demon summoning/creation rules. Also, some references regarding levels of sorcery found in the earlier editions were left in, but the rules for them were left out. See the Elric! entry for the fifth edition of Stormbringer, which is actually a new game."

There's also a very early Games Workshop feel about this Stormbringer rpg. What I mean that there's a very wargamy feel to the material here. The armies of the Pan Tangians & Melniboné are presented along with the figures of the Eternal Champion. The book feels like GW went all out here. And this bares out as more of a reorganization then simply another rpg book. Something that again Rpg net has picked up on;"Notes on This Edition
The third edition of Stormbringer was distributed as a hardcover by Games Workshop. It is a straight reprint of the second edition rules, but with the magic and gamemaster sections reorganized (curiously maintaining all of their numerical section heads, resulting in the numbers running 1/2/3/4/7/8/5/6). In addition, the complete Stormbringer Companion is also included. The book is printed in a mixture of full-color and black & white. This book also features a US ISBN and stock, though they both seem to be wrong. The ISBN is 0-933633-43-5 (which wasn't actually Chaosium's ISBN code at the time, which should have been 933635) and the stock number is the rather mysterious 43 (which should have been #2109-H according to Chaosium catalogs of the time)."

Now while it may not seem like it a fellow blogger has provided a very handy chart for converting between the BRP system from Chaosium ie Stormbringer, Adventurer,Conqeuror, King Rpg , and other OSR systems. This also brings into focus some of the optional  adventures, articles, etc. for the third edition Stormbringer rpg. Alesmiter also has a number of articles on the type of riff raff that asssociate with out erm adventurer in his blog post 'Round up the Usual Suspects! - And how to become one'.
Make no mistake after thumbing through the '87  Games Workshop 'Stormbringer' its obvious that Elric & co. were considered scum of the Earth by most of the Young Kingdoms. This makes the presentation of Elric as NPC in the original Stormbringer set up all the more interesting because of the twist up of him in the Games Workshop third edition. 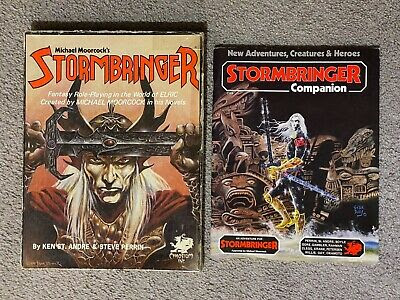 Is there room in the OSR for a Stormbringer game!?! Possibly but there's a ton of differences between the way that Stormbringer works & say traditional Advanced Dungeons & Dragons first edition even though conversion is entirely possible. But the tone of the AD&D Deities & Demigods Elric material verus third edition Stormbringer is day & night. 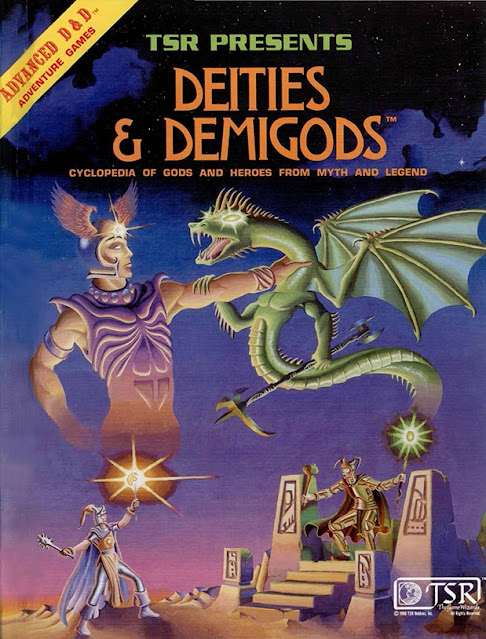 The Games Workshop Stormbringer rpg is far more clear & outlines the Moorcock mythos far more in a straight forward & obvious method. The player's PC's almost have a destiny to play in the game or so it seems from the world background system. 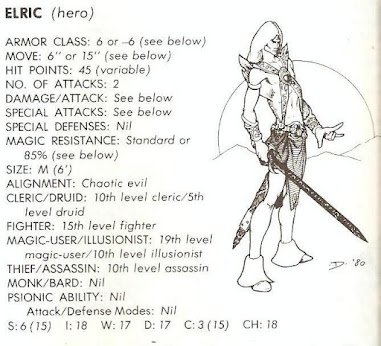 The Games Workshop Stormbringer feels like a campanion piece to an unreleased Elric fantasy wargame that never saw the light of day. This is only a feeling on my part & in the past I've owned a complete Pan Tang chaos army made up of the classic Games Workshop figures.
Posted by Needles at 1:05 AM