" Between the Oldest Ocean and the Eastern Ocean lies the Isle of Purple Towns, the center of commerce and trade in the Young Kingdoms. 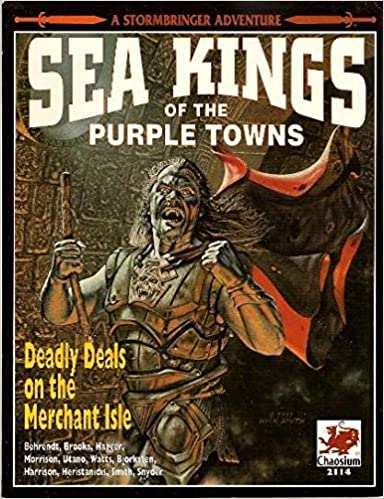 Sailing into port, visitors are impressed with the magnificent buildings, the splendid markets, and friendly people. Few see the undercurrents, the dirty deals, and the politics which threaten to rip apart the apparent serenity of the island.The Isle of Purple Towns is a haven for adventurers, a safe port to count money and plan future deeds of daring. It lies literally in the middle of the world, and ships sail from Purple Towns ports to every other nation."
If there's one or more essential books for the Stormbringer rpg or even running a Stormbringer rpg style game then its for us at least its gotta be 'Sea Kings of The Of the Purple Towns' by Fred Behrendt. Not a really well known book today which is too bad. This series of loosely interconnected adventures has everything going for it. This sitution with the adventures, they make an excellent starting point for a Stormbringer or OSR campaign.
'Sea Kings of The Of the Purple Towns' by Fred Behrendt presents a two part campaign setting & adventure  package.The first half of the island is very well  detailed within this  125-page sourcebook. The people,history, background, notable NPC's, etc are all gone over in this book in detail. The island & its environs were once the home of  the Melnibonean navy & the piratic sea kings have carved out their own niche as responisble merchants who worship the forces of Law. The adventures within  'Sea Kings of The Of the Purple Towns'  can be played invidually or as a linked campaign.
"The Strong Arms" is a sort of a shell of an adventure that centers around the aquistion of a tavern & can serve as the central hub of the campaign or not. "Sisters of Chaos" is a cut above the usual Stormbringer weirdness. This is a solid adventure & flows right into the "The Unholy Fortress"  which is a straight up epic adventure in full on Sword & Sorcery goodness. This adventure is one part Sea Kings & three parts guarding the bones of a dead god against the forces that wish to exploit them. This is an epic adventure unto itself it remains true to the Stormbringer spirit.
"Kariss Burning" ties up the adventure ends of all of the above adventures with another adventure. Part parable & part higher level heroes in almost retirement mode. Needless to say that  'Sea Kings of The Of the Purple Towns' is to me at least as a DM one of those essential books for a gaming system in this case the Stormbringer rpg system. The combination of authors such as Fred Behrendt, Nick Hagger, Mark Morrison, Anthony Utano, & Richard Watts that push the quality of 'Sea Kings of The Of the Purple Towns' past the usual stuff on the night rack.
One of the things that we did with  'Sea Kings of The Of the Purple Towns' is to use the island as a base of operations for our adventurers. We also became merchants & traders within the Young Kingdoms. And to trade we used the Runequest rpg book  'Cities'. We used this book for our ports of call & various urban locations. This is what we did with it. 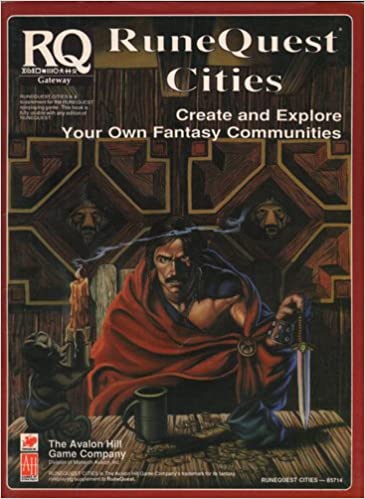 'Cities' came out in 1990 & is a series of very well done random encounter charts that can be adapted for any system. And this is where things get very interesting because 'Cities' can be used to fill in the gaps for a campaign as easy of the roll of the dice. And this makes these books perfect for OSR campaign. This is especially true if you like tinkering with systems. This means that Adventurer,Conqueror, King rpg can't be far behind. 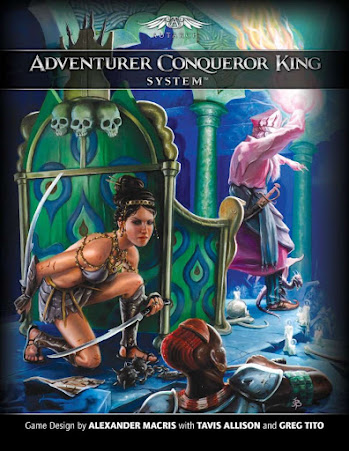 Both books quite readily fit the vibe of Stormbringer quite nicely but they can easily be part of an on going sea faring ACK's campaign.The base system provides everthing that the DM is going to have to pull apart to make a successful campaign. The thing about this campaign is that it has to be pulled off in sections from the beginning to the epiosidic nature of such a campaign. 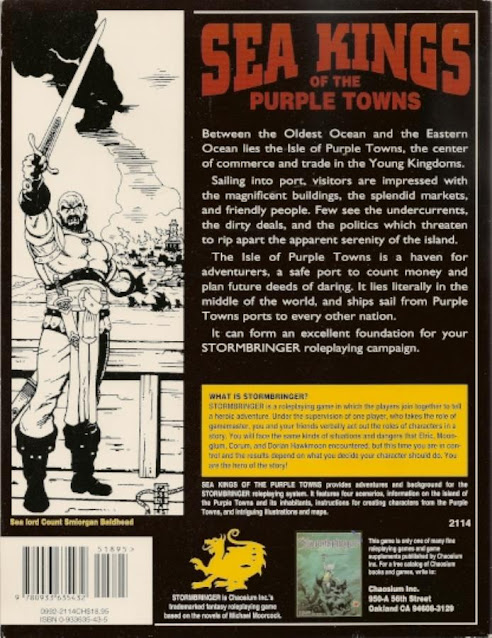 All in all 'Sea Kings of The Of the Purple Towns' by Fred Behrendt was way ahead of its time in terms a series of adventures that links together to form both a great beginning & continuing campaign. Highly recommended.