"This is the Classic Arduin Module Collection of previously published Arduin Dungeons and some never before published Dungeons from the mind of David A. Hargrave!

...Harken back to the days of old! Feel the shiver of terror within the shadow of the Howling Tower! Brave the treacherous cliffs of the Thousand Thunder Falls...dare you venture behind the thundrous sheets of water? Sally forth in the name of glory, greed and adventure!

Arduin fans this is it! "Vaults of the Weaver" delivers six modules designed and written by David Hargrave in one book. From the flying dutchman of dungeons, "Caliban," to the depths of the never before published, "Hive Home," come experience the deadly dungeons of Hargravian history.

David Hargrave is back for one more round of hell, so what are you waiting for? Grab your cold steel and ride forth to save the world...it's time to enter the Heart of Darkness!" 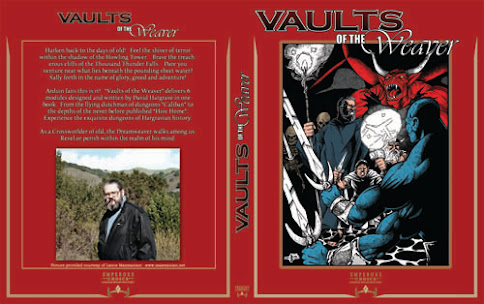 This is Vaults Of The Weaver, how the hell does one talk about a mega collection of modules from the likes of Dave Hargrave? With Boldness really.. These harken back to time when D&D was about Dungeon Masters & players going through flights of fancy & mega-dungeons..Contained within Vaults of The Weaver : A compilation of the 4 Arduin Dungeons along with Hive Home (the only example of a Phraint Hive ever completed by their creator David A. Hargrave) and the 13 part Heart of Darkness campaign, both never before published.This book is not only a compilation of those adventures it basically shows how all three are interlinked within Hargrave's campaign world. There's a special note about these types of supplements, they are from a time when Dungeons & Dragons was not only a new game but also a game where characters weren't supposed to reach level  11 or greater. These dungeons are lethal make no mistake about it. They come from a time when some games were dungeon vs players. Grimtooth's traps is a good example of this. I would suggest using the wonderful rules made by Goblinoid Games to play these including Mutant Future. Why? Because the hit dice of characters is higher & it will enable a group to survive. Also  the technology rules will come in very handy with "treasure" & such. If you own the Arduin Grimoire use some of the classes from it to augment the party. The following is a series of links to wiki which gives a nice presentation on the main adventures found in the book. My advice is start with the Howling Tower!

Presentation - Emperor's Choice games did a nice job getting these adventures into a great little package. The artwork is all original  from the original adventure books. It ranges from excellent to um mm ok. But I think it capture's the feeling that the author was going for. Cue metal soundtrack here.. 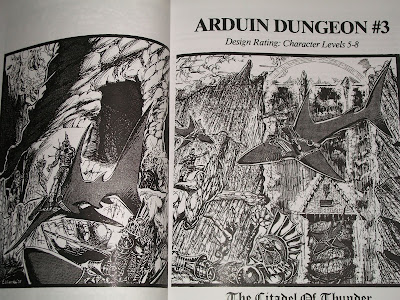 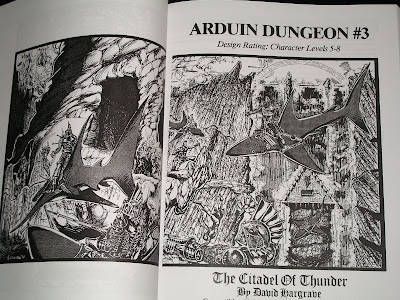 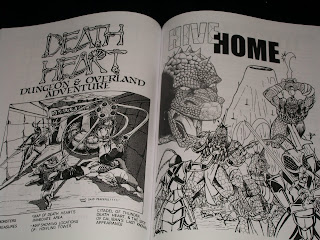 Rules - Everything is presented in a Arduin system for this game. Basically this was a retro clone system before it was ever a glimmer in our collective eyes! Had Dave Hargrave lived into 2010 I think he'd be another voice of the OSR but that's simply my opinion. Anyhow also included are: Hive Home- Hive Home (the only example of a Phraint Hive ever completed by their creator David A. Hargrave) and the 13 part Heart of Darkness campaign, both never before published.
Also included is the Tomb of D'Haera
The Dungeon and Overland maps have been re-drawn and cleaned up, still the same maps just better looking!Evaluation:Presentation: Good Solid BookRules - GoodPlay ability:  Fair To GoodRealism - Good (For Arduin's D&D style)Value: At 29.99 for this book with everything it contains & the cost of these modules individually. I'd say I've gotten my money's worthComplexity:8Overall Evaluation: Good SolidCheck out the book HereThis is an unbiased review I have no connection with Emperor's Choice Games or the estate of Dave Hargrave. Vaults of the Weaver was purchased by myself over 12 months ago from Emperor's Choice Games.
Posted by Needles at 12:14 PM