"Having put down a rising of giants, it was discovered that the motivating force behind their depredations was that of long-forgotten evil: the Dark Elves. Determined to seek out these creatures, a body of doughty adventurers mounted an expedition to learn the strength of the Drow and bring retribution to them."

So I mentioned the second part of the Hundred Years War campaign idea using the  Lion & Dragon rpg system & Dark Albion as campaign source book. Here adventure events  are going to start heating up because the appearance of  Joan of Arc on the scene. France has been beat down before this & the powers of chaos have been taking full advantage. All of this goes back to events from  Gary Gygax's D2 "Shrine of the Kuo-Toa" (1978). You see for centuries before the events of the Hundred Years War the Deep Ones have been secretly planning to take over Paris & all of France. During the Hundred Years war they've been making in roads to do exactly this. 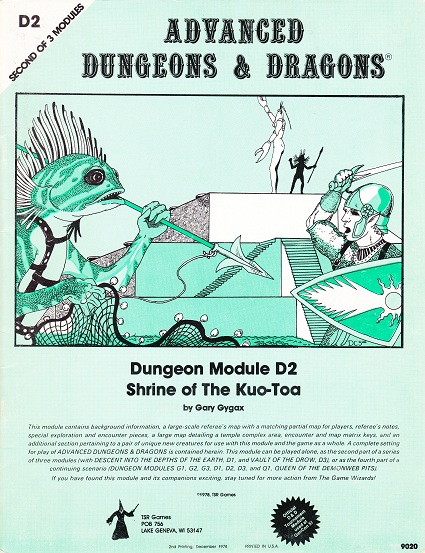 What do I mean by Deep Ones?! The immortal frog fish men straight out of H.P. Lovecraft's The Shadow Over Innesmouth?! The Deep Ones are survivals straight out of mythological myth & legend with cities all over the oceans including Europe and that includes the swamps of Paris which was once one of their seats of power. They mean to have that particular center of power back and in Dark Albion they gain it during the Rose War.
"Thar's whar it all begun—that cursed place of all wickedness whar the deep water starts. Gate o' hell—sheer drop daown to a bottom no saoundin'-line kin tech. Ol' Cap'n Obed done it—him that faound aout more'n was good fer him in the Saouth Sea islands.
"Everybody was in a bad way them days. Trade fallin' off, mills losin' business—even the new ones—an' the best of our menfolks kilt aprivateerin' in the War of 1812 or lost with the Elizy brig an' the Ranger scow—both on 'em Gilman venters. Obed Marsh he had three ships afloat—brigantine Columby, brig Hefty, an' barque Sumatry Queen. He was the only one as kep' on with the East-Injy an' Pacific trade, though Esdras Martin's barkentine Malay Bride made a venter as late as twenty-eight.
"Never was nobody like Cap'n Obed—old limb o' Satan! Heh, heh! I kin mind him a-tellin' abaout furren parts, an' callin' all the folks stupid for goin' to Christian meetin' an' bearin' their burdns meek an' lowly. Says they'd orter git better gods like some o' the folks in the Injies—gods as ud bring 'em good fishin' in return for their sacrifices, an' ud reely answer folks's prayers.
"Matt Eliot his fust mate, talked a lot too, only he was again' folks's doin' any heathen things. Told abaout an island east of Othaheite whar they was a lot o' stone ruins older'n anybody knew anying abaout, kind o' like them on Ponape, in the Carolines, but with carven's of faces that looked like the big statues on Easter Island. Thar was a little volcanic island near thar, too, whar they was other ruins with diff'rent carvin'—ruins all wore away like they'd ben under the sea onct, an' with picters of awful monsters all over 'em.
"Wal, Sir, Matt he says the natives anound thar had all the fish they cud ketch, an' sported bracelets an' armlets an' head rigs made aout o' a queer kind o' gold an' covered with picters o' monsters jest like the ones carved over the ruins on the little island—sorter fish-like frogs or froglike fishes that was drawed in all kinds o' positions likes they was human bein's. Nobody cud get aout o' them whar they got all the stuff, an' all the other natives wondered haow they managed to find fish in plenty even when the very next island had lean pickin's. Matt he got to wonderon' too an' so did Cap'n Obed. Obed he notices, besides, that lots of the hn'some young folks ud drop aout o' sight fer good from year to year, an' that they wan't many old folks around. Also, he thinks some of the folks looked dinned queer even for Kanakys.
"It took Obed to git the truth aout o' them heathen. I dun't know haow he done it, but be begun by tradin' fer the gold-like things they wore. Ast 'em whar they come from, an' ef they cud git more, an' finally wormed the story aout o' the old chief -- Walakea, they called him. Nobody but Obed ud ever a believed the old yeller devil, but the Cap'n cud read folks like they was books. Heh, heh! Nobody never believes me naow when I tell 'em, an' I dun't s'pose you will, young feller—though come to look at ye, ye hev kind o' got them sharp-readin' eyes like Obed had."
HP Lovecraft The Shadow Over Innsmouth 1936
All throughout the countryside the Frogmen's witch covens & cults have been sewing mayhem & evil weakening France. The Frogmen are in direct competition with the Dr ermm Elves for all of the marbles during the Hundred Years War. But God is not mocked & Dagon's brood are in for a rude awakening in the form of "The Maid of Orléans" (French: La Pucelle d'Orléans). 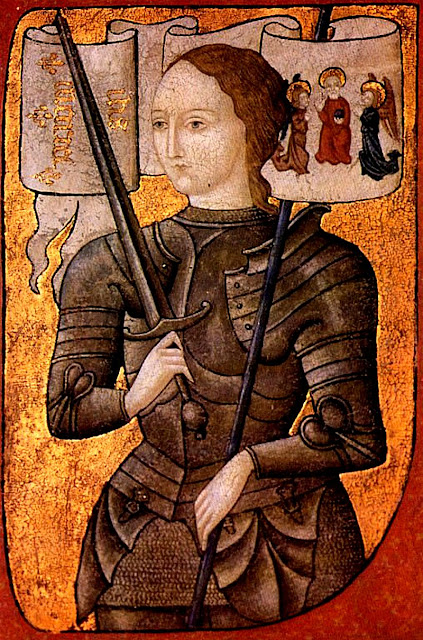 "Joan of Arc (French: Jeanne d'Arc,[5] IPA: [ʒan daʁk]; 6 January c. 1412[6] – 30 May 1431), nicknamed "The Maid of Orléans" (French: La Pucelle d'Orléans), is considered a heroine of France for her role during the Lancastrian phase of the Hundred Years' War and was canonized as a Roman Catholic saint. Joan of Arc was born to Jacques d'Arc and Isabelle Romée, a peasant family, at Domrémy in north-east France. Joan said she received visions of the Archangel Michael, Saint Margaret, and Saint Catherine of Alexandria instructing her to support Charles VII and recover France from English domination late in the Hundred Years' War. The uncrowned King Charles VII sent Joan to the siege of Orléans as part of a relief mission. She gained prominence after the siege was lifted only nine days later. Several additional swift victories led to Charles VII's coronation at Reims. This long-awaited event boosted French morale and paved the way for the final French victory.
On 23 May 1430, she was captured at Compiègne by the Burgundian faction, which was allied with the English. She was later handed over to the English[7] and put on trial by the pro-English Bishop of Beauvais Pierre Cauchon on a variety of charges.[8] After Cauchon declared her guilty she was burned at the stake on 30 May 1431, dying at about nineteen years of age.[9]
In 1456, an inquisitorial court authorized by Pope Callixtus III examined the trial, debunked the charges against her, pronounced her innocent, and declared her a martyr"
So not only is she and her forces instrumental for boasting the morale of France but she's instrumental in stopping the push by the Deep Ones during  the Lancastrian phase of the Hundred Years' War.
Everything here depends upon several pivotal battles which didn't happen in Dark Albion enabling the Deep Ones to take France. The dungeons of Gary Gygax's D2 "Shrine of the Kuo-Toa" (1978) are directly under Paris & spread out into the countryside. The Sviberfneblin are straight out of French Fairytale books from the late 1800's & later on the 20's. There is some evidence that the Sviberfneblin might also reference certain Arthurian fairies.

Blibdoolpoolp might well be another chaos god avatar of the Deep Ones she has all of the required Lovecraftian elements & lends a large amount of weight to the encounter with her. She's an interesting contrasting chaos goddess symbol for various witch cults especially given the implications that the  French population had not recovered to its size previous to the Black Death of the mid-14th century. This was a time when ripe for violence across the countryside.

PC's are going to have to bring their 'A' game playing through a Lion & Dragon campaign set up for Gary Gygax's D2 "Shrine of the Kuo-Toa" (1978) especially during the Lancastrian phase of the Hundred Years' War.
This is going to require a great deal of thought & careful planning or the party is going to end up very dead or worse. This is a location based adventure with lots of twists & turns that is going to effect the greater outcome of the Hundred Years War. As well see these events turn things inside out for the Lions & Dragons game soon.
Posted by Needles at 10:58 PM