DM Steve has been using some of my ideas from last year's efforts on his own Godbound campaign.  That seems like a lifetime ago living in a post Covid 19 world. But just night I joined in on a jolly little Stormbringer rpg Facebook group that actually seems pretty solid. But now he wants to add in some Michael Moorcock Elric mythos elements from original Dungeons & Dragons Gods, Demigods, & Heroes by Kuntz & Ward. 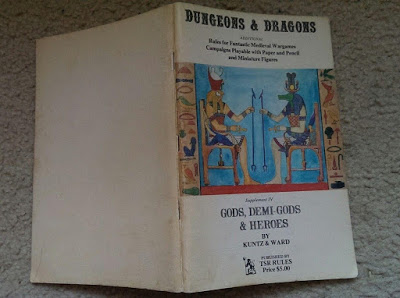 The real problem is that while Godbound does have rules on corruption for the foul magics & works of Chaos. It doesn't have the right Stormbringer or Moorcockian flavor. This is where the modular nature of B/X  & original Dungeons & Dragons comes in very handy. 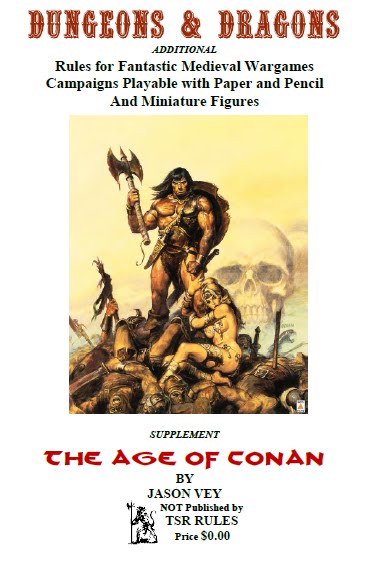 Enter Jason Vey's The Age of Conan, a 'hack' of  original Dungeons & Dragons. As a free book it comes in very handy. Not only is it a full on Sword & Sorcery set of rules but he's also got the Age of Conan II: Secrets of Acheron a sorcerers' source book just waiting there. It captures the Stormbringer demon ritual magic perfectly. And the Age of Conan III: Secrets of the Black Circle is pefect for getting your OD&D Lovecraftian weirdness on. This is going to easily simulate the dire magics of the doomed  world of Elric. All of the nastiness of chaos is right there and the corruption comes through in spades. 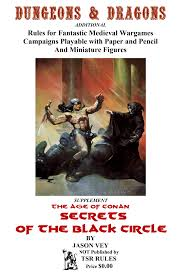 This is where the mythology of Stormbringer the demonic sword itself comes into play as the wiki entry on Stormbringer explains; "This powerful enchanted black blade is a member of a demon race that takes on the form of a sword, and as such is an agent of Chaos. Stormbringer's edge is capable of cutting through virtually any material not protected by potent sorcery, and it can drink the soul from (and thereby kill) an unprotected human upon delivering any wound, even a scratch. Its most distinctive features are that it has a mind and will of its own, and that it feeds upon the souls of those it kills. Elric loathes the sword but is almost helpless without the strength and vitality it confers on him.[3]

Stormbringer's hunger for souls is such that it frequently betrays Elric by creating a bloodlust in his mind, turning in his hands and killing friends and lovers. The cursed nature of the sword adds to Elric's guilt and self-loathing, even as he feels pleasure when the stolen lifeforce enters his body.

Stormbringer has a "brother" sword named Mournblade, which was at one time wielded by Elric's cousin and enemy Yyrkoon. It is identical to Stormbringer in most regards. Later stories reveal that there are thousands of identical demons, all taking the form of swords. Three such sibling blades appear in The Revenge of the Rose and many more "brother blades" are seen in the novel Stormbringer, but only Mournblade and Stormbringer are named.

In Elric of Melniboné, Elric and cousin Yyrkoon find the runeblades in a realm of Limbo and commence battle. Elric and Stormbringer disarm Yyrkoon, and Mournblade disappears. Yyrkoon is defeated, and Elric and his cousin return to Imrryr.

In The Weird of the White Wolf, Elric returns to Imrryr after a long journey and confronts Yyrkoon, who usurped the throne in his absence. Yyrkoon has regained Mournblade through unknown means and uses it to attack. Elric and Stormbringer kill Yyrkoon, and no further mention is made of Mournblade until it is later disclosed that it was recovered by the Seers of Nihrain, to be wielded by Elric's cousin, Dyvim Slorm. Imrryr is sacked, though the pillagers' fate is not much better, being pursued by the golden battle barges and the few dragons who were awakened, led by Dyvim Tvar. Only Elric's ship escapes, propelled by the aid of his sorcery.

In Stormbringer, Elric learns that the representatives of Fate, which serve neither Chaos nor Law, recovered Mournblade from the netherworld. They present it to Elric and explain that the runeblades were designed to be wielded by those with Melnibonéan royal blood as a check against the might of the Dead Gods of Chaos. Elric gives Mournblade to his kinsman, Dyvim Slorm, and the two men become embroiled in a confrontation between the gods. Elric summons others of Stormbringer's demonic race (also in the form of swords) to fight against a number of Dukes of Hell, brought to the Young Kingdoms by Jagreen Lern, theocrat of Pan Tang."

The demon weapons are representives of the types of magical weapons that get to place themselves into the 'war of the gods' over the eons.  Both Stormbringer & Mournblade could be considered the 'gods' of these demon blades. They are more then capable of tipping the balance of entire universes. They should always be used with cautions by dungeon masters..