" Rogue Mistress presents a high-powered, dangerous campaign for either the Stormbringer or Hawkmoon roleplaying games. Rogue Mistress features eight chapters, comprehensive listings of new weapons, additional races from which new adventurers can be created, plentiful illustrations, plans, and diagrams, and new rules and clarifications for the Stormbringer roleplaying game." 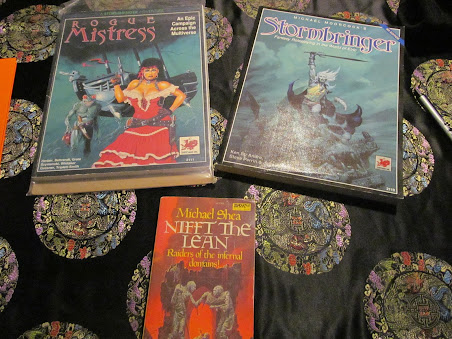 Michael Shea's Nifft The Lean was the motivator for the next leg of the journey sorta of. The Rogue Trader was/is a scaling ship & a playing piece in the grand game of time. We made an attack on the palace of Media in the Rogue Trader! And this was to grab the Tantir the navigator of the Rogue Trader who was captured by the sorceress Salrenna. We had some history with this witch right from the get go if you've been paying attention last session. 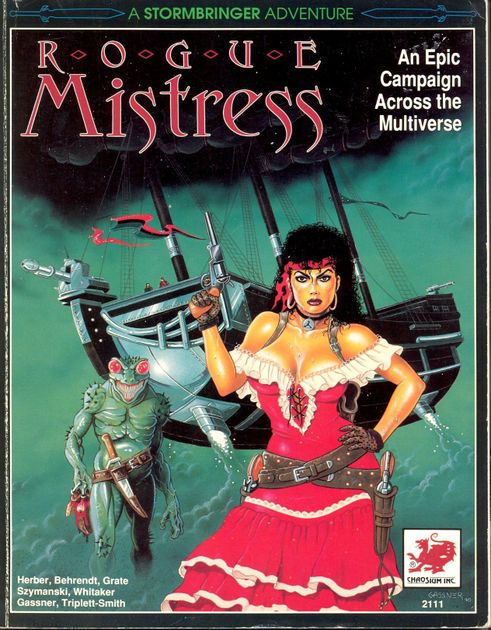 We busted into the palace of Media & it was a slog of a game session! It was a regular dice chucking session of combat. The game resembled more of a war game then it was a one to one session! We lost two of our six PC's in this melee/jail break! They succumbed to mortal wounds! Ranks were replenished from prisoners within the jail. These died in a total TPK freeing the Tantir from a diabloical sorcerous trap created by the sorceress Salrenna! I'm not gonna spoilt it. More prisoners filled out the party our wizard stayed aboard the Rogue Mistress and survived!
We scrambled aboard the mistress after taking some pot shots against the queen Media. But quickly scrambled back aboard when her patron Morgan Le Fey appeared! 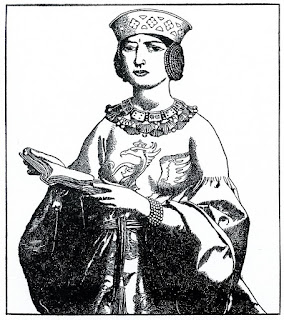 We freed a number of prisoners including a young & very dangerous warrior named Medrawt. Who scrambled to the armory of the fortress for his demon sword & enchanted spear. He was fleeing his mother & her destiny for him because he held her off with magics while we scambled to safety! Then came with us?! Medrawt is of course Modred a name rife with betrayal, sin, & murder. So this NPC was right up our alley. 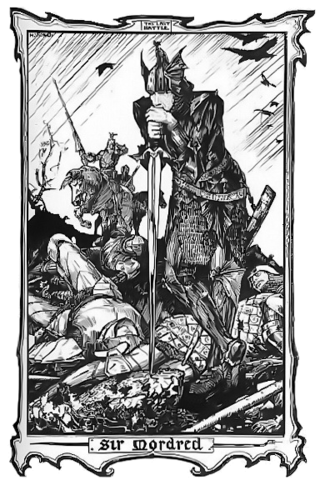 "Sir Mordred — The Last Battle", from The Book of Romance, edited by Andrew Lang. New York: Longmans, Green and Co., 1902.

We escaped into the second ether aboard the Mistress. But the Rogue Mistress was damaged!? We also had left behind some choice chaos & demon weapons on our dead. Yes there's that whole tradition thing aboard the Rogue Mistress but damn it we had worked our rears off in the forrests of Troos for those artifacts. 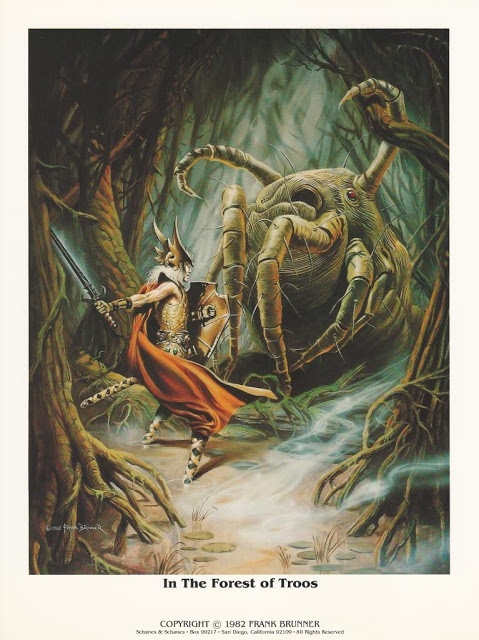 Frank Brunner's 'In The Forest of Troos' was a major influence on our DM.

Now we were lementing those choice demon items when Medrawt pipped up that he knew a place where there were demon weapons rife for the taking near our destination. Hold on to your hats kids here's where Michael Shea's Nifft The Lean was the motivator for the next leg of the journey sorta of. The Mistress can put us on the shores of Hell's chaos wastes  near where the battle of the Fall occurred & we can take our pick of weapons?!
Now I've got to note that the DM had recently aquired a copy of White Dwarf (Issue 103 - Jul 1988). This issue has an article called Realm of Chaos - Chaos Weapons and their abilities.. 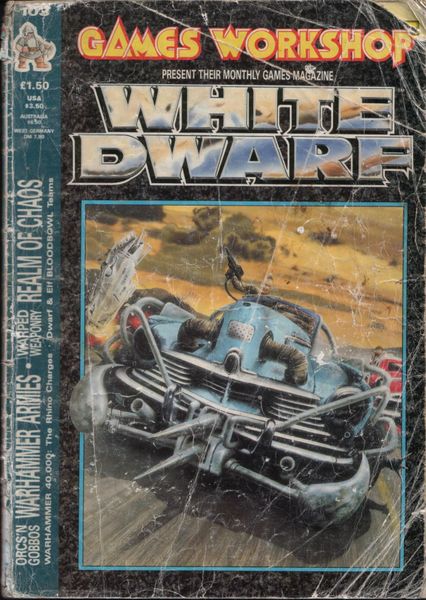 It seemed only fitting that we convert that article into the Stormbringer rpg because Games Workshop had 'borrowed' so much from Michael Moorcock's mythos. We agreed as long as Medrawt came with us.
This whole outting was inspired by Michael Shea's  story 'Come Then, Mortal, We Will Seek Her Soul'. 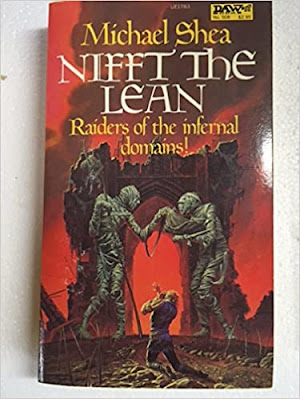 The Mistress put into the moist living shore of the outter most level of this area of Hell. And that's when we had our encounter with two demonic doormen who wanted a boon to enter the vulva like Hell Mouth. The boon consisted of two of the most innocent memories of our PC's. Galling to say the least and the promise of a return to this spot for torture when our PC's died. Medrawt passed without comment or incident which told us about his part in this little part of the adventure. 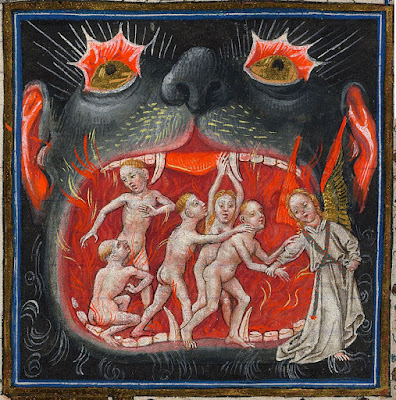 We entered the Hellmouth without ceramony & within it was mile after mile of broken urban landscape. We passed various decaying angel like creatures nailed to walls or strung in between buildings in spiderlike cables. That's when one of them still animated called to us!? Apparently this was an aspect of  'Queen Xiombarg' who was asking if we were come to join her?!
We answered, 'No not yet'.  And her response was simply,'Pity'. 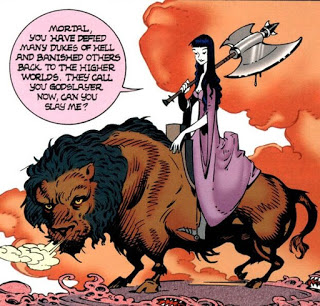 We were a bit freaked out to say the least & made our way to the field of former battle where row after row of angels & demons decaying bodies were spiked and still dying after millions of years. Our wizard picked up seven names of true angels while on that battle field.
We picked up weapons here & there but were seen by demon scavengers! We had to fight our way back to the Hellmouth & then use those seven names to get the Hellmouth to open! The doormen's last words to us were, 'See you again soon!' 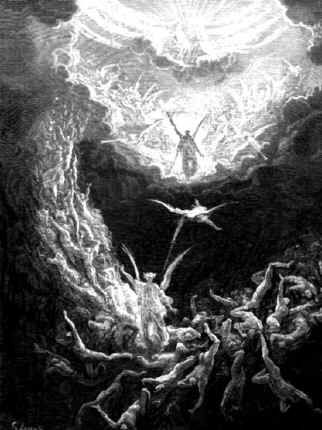