' Nurse put me down on the soft moss under a tree, and she said: "She can't get to the pond now." So they left me there, and I sat quite still and watched, and out of the water and out of the wood came two wonderful white people, and they began to play and dance and sing. They were a kind of creamy white like the old ivory figure in the drawing-room; one was a beautiful lady with kind dark eyes, and a grave face, and long black hair, and she smiled such a strange sad smile at the other, who laughed and came to her. They played together, and danced round and round the pool, and they sang a song till I fell asleep. Nurse woke me up when she came back, and she was looking something like the lady had looked, so I told her all about it, and asked her why she looked like that. At first she cried, and then she looked very frightened, and turned quite pale. She put me down on the grass and stared at me, and I could see she was shaking all over. Then she said I had been dreaming, but I knew I hadn't. "
The White People (Machen) by Arthur MachenThe Green Book 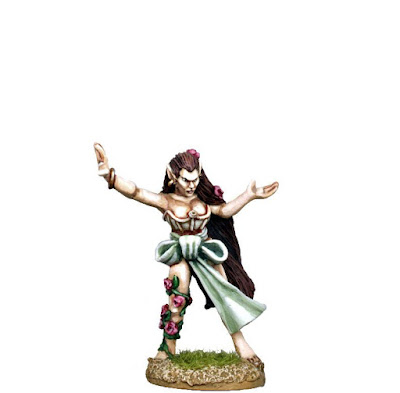 The Wildness series of Judges Guild  adventures is the perfect  Wilderlands of High Fantasy campaign series of adventures to modify into a fantastic jump point for a Celtic Sword & Sorcery campaign. The Wilderness series is as follows  : There are several races of god/Elves in my game campaigns that let's simply call them very nasty & evil. These things align themselves with far more Sword & Sorcery & mythology then they do with the regular garden variety of original  Dungeons & Dragons  or Advanced Dungeons & Dragons first edition's depictions of  Elves. In fact the Elves of AD&D first edition are known huldra ("hidden being") in Scandinavian languages these life force  are a food staple for these Pagan  gods.

These pagan gods are almost but not quite demonic harkening back to the time of the post Biblical flood. These entities are most likely a member  Nephilim family stretching back millions of years. They pass themselves off as 'gods' gaining food from the spiritual aspects of human scarafice & worse. I found a good version of these beings in The Foundry's Revenant Elves army. These things are perfect powers to be behind the affairs of Witches Court Marshes. Their favors are going to be fickle at the best of times & solidly nasty later on. The Witches are powers within their own right with all kinds of adventure or campaign possibilities. 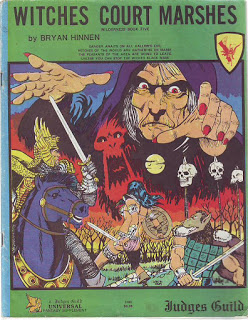 This version of the 'Wilderlands of High Fantasy' draws very deeply from the Castles & Crusades material James & Jody Mishler Games had out a couple of years ago.
But this time it seems that with Arthur Machen's influence upon me once again. There are far more Machenian survivals out among the misty stones & ruins of the wilderness of the Wilderlands. A world before the world so to speak  & the original Elves Dungeons & Dragons owe more to Appendix N writers & less to Machen's vision; "A pioneering work of the fantasy genre was The King of Elfland's Daughter, a 1924 novel by Lord Dunsany. The Elves of Middle-earth played a central role in Tolkien's legendarium, notably The Hobbit and The Lord of the Rings; this legendarium was enormously influential on subsequent fantasy writing. Tolkien's writing had such influence that in the 1960s and afterwards, elves speaking an elvish language similar to those in Tolkien's novels became staple non-human characters in high fantasy works and in fantasy role-playing games. Tolkien also appears to be the first author to have introduced the notion that elves are immortal.[citation needed] Post-Tolkien fantasy elves (which feature not only in novels but also in role-playing games such as Dungeons & Dragons) are often portrayed as being wiser and more beautiful than humans, with sharper senses and perceptions as well. They are said to be gifted in magic, mentally sharp and lovers of nature, art, and song. They are often skilled archers. A hallmark of many fantasy elves is their pointed ears" These ancient god Elven like things often use not traditional sources of military action but disease like curses & spreading maladies of occult origin. When hard pressed they will construct very alien & archaic constructions such as the Teratic Tome's Obsidian Giants. These monsterosities are capable of going toe to toe with mecha & even giant kin as well as kind. The Obsidan Giants are constructed  things or war machine that  are fueled by regular Elven slaves that have been captured. And married to these foul creations. 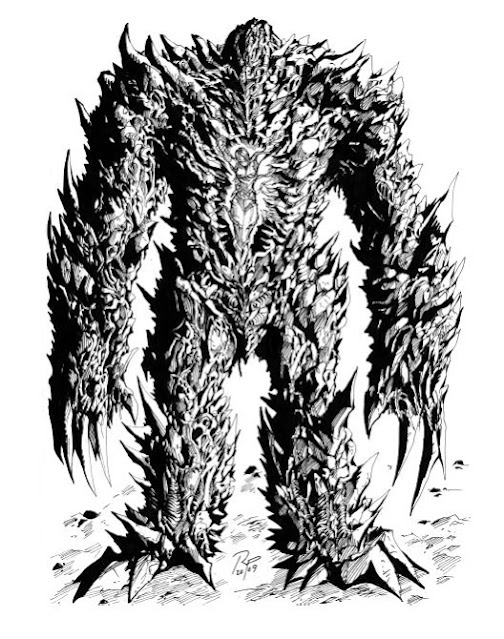 The question is out in the middle of the unknown & savage Wilderland of High Fantasy are there artifacts & structures such as Arthur Machen's Shining Pyramide!?! Not only do I think so but many of the original Judge's Guilds Wilderlands of High Fantasy adventures bare this out. These are ancient Pagan gods that are far more arrogant, alien, & utterly inhuman in their take torward humanity & even their own supposed kin. Dwarves, Elves,etc. all of the demi human races of Dungeons & Dragons are their prey. They come from a time when the hills ran red with their sacrifices, & altar stones ran wild with their revelries!