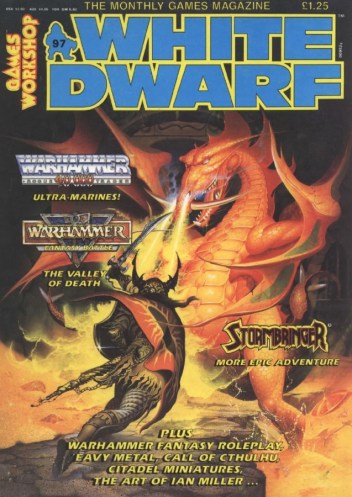 If the armies of Pan Tang were a constant threat over the heads of the PC's in my games then about to talk about the real enemies. The masked NPC warriors who not only threatened my Stormbringer rpg group but terrified the living Hell outta of them. They chased them across the multiverse & back again..
So let's back up here & our group of adventurers had dealt with the events of 'The Madcap Laughs' & we had died numerous times. Not only did I get a chance to play but we often took turns being the dungeon master.  Our PC's  died by bandits, by random encounters, by demon encounters, and the list goes on from there. But two our wizards got a crack at the Whispering Codex which is the Necronomicon for the Chaos god  'The Pyaray Whisperer of Impossible Secrets'. 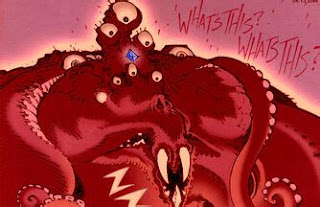 One wizard ate his dagger because he went completely mad from reading the 'Codex of Impossible Secrets'. The second wizard however went temporarily insane & used a demon of transportation to plane jump our entire party to some random plane of the million spheres.
We ended up on a null plane someplace at the ends of the muliverse & the party was in real trouble but how much we didn't know. The enemy NPC's also trapped on this featureless plane of grey sand were from the Tragic Earth. And  this was meeting with our long running enemies from Hawkmoon's world. 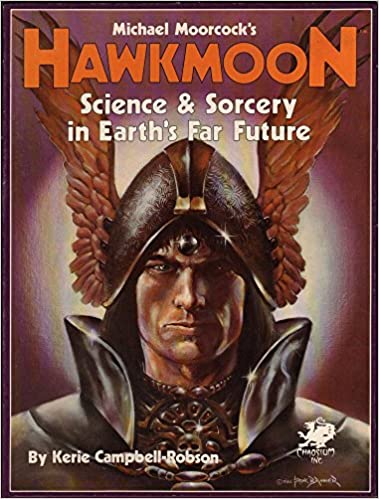 Charles D'vere The First Duke of La Roy & the second grand inquistor of the Emperor of Europe. A member of the Praying Mantis division of the scared church of science  introduced himself along with his wolf & boar bodyguards. He then tried to have us murdered for the demon of transportation in the necklace that our wizard wore. Our party would not see the last of  'The Pyaray Whisperer of Impossible Secrets' nor be a part of the machinations of Balo Jester of the Chaos gods. The second grand inquistor Charles D'vere The First Duke of La Roy began his attack when some of the null  elementals of the plane made themselves known to our group. Charles was a product of  the foul Granbretan empire. While he was very well mannered he came straight out of the '87 box set of Hawkmoon from Chaosium. Charles became our mortal enemy after two of his body guards were cut down by our party during the melee.
We knocked the wizard around until in a moment of lucidity he activated the demon of transportation again. But it required a sacrifice to feed on to get us out of there & while not in the Stormbringer rpg rules we roll played it out sacrificing the soul of one of the boar masked  bodyguard guards. The null plane that we had found ourselves on was leaching Pow out of us at an incredible rate. We found ourselves flattened on the moonbeam roads. Bleeding, battered, insane, & really out of options at this point. But we had to get moving and moving fast! We were lost among the million spheres & lost. But we saw the mantis masked  Charles D'vere  enter the moon beam roads pursuing a group of children armed with a flame lance. We managed to make our way to the children just as a very greviously wounded Charles collapsed on the road.
Our party was able to gather the 'Children of the Grail' & with a casual snap of their wrists  we found ourselves upon yet another plane this time creepily  simliar to the Young Kingdoms.
And we came face to face with the children's caretaker Unvia Von Bek a very pretty albino woman weilding a sword of Law known as 'The Dawn of the World'. Unvia Von Bek was the children's guardian & teacher. The children were mutants from the Tragic Europe era who did 'The Rune Staff's handiwork' in their words. They cured our wizard of his insanity & we were able to rest outside of  Unvia Von Bek's home. But during the coming dawn we found ourselves on the shores of a strange plane surrounded by strange wrecks of cosmic ships. Things were about to get very strange & dangerous for the PC's we took a path down by the beach into some woodlands & were assaulted by Fairies. Then we found ourselves within a strange snow storm only to come out on to woodlands of the forrests of Troos. 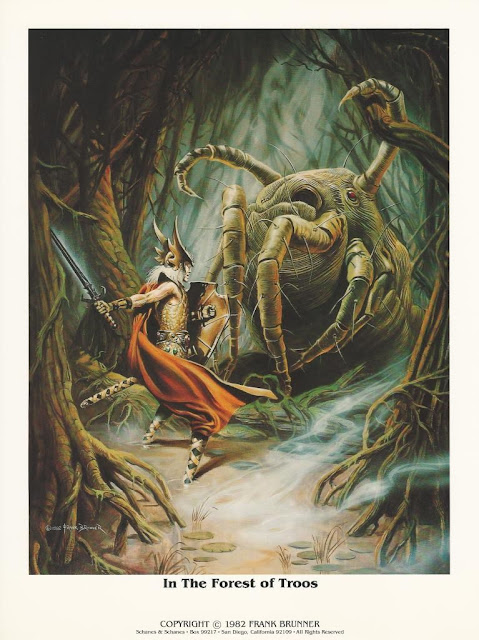 Frank Brunner's In The Forest of Troos artwork  plate was the inspiration for what happened next! Our party found out that twenty years had passed since we had tripped into the madness of Balo's schemes. The Young Kingdoms was in shambles & things were going from bad to worse mostly at the hands of Elric! Our party did mercenary work for the rulers & around the Forrest of Troos for a while but our encounter with 'The Children of the Grail' was far from over. We were getting mixed up in the machinations of the Arthurian, The Devil & The Von Beks! 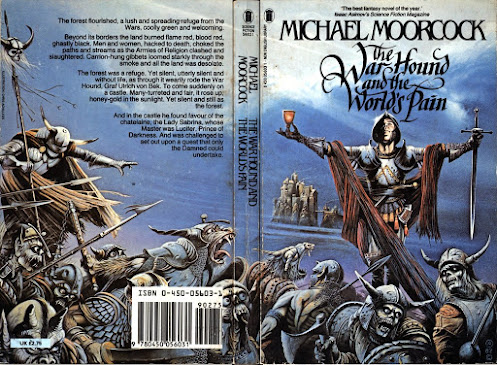