There are worlds that authors imagine that are original,brutal, honest, weird and dangerous all at the same time. That's what Hubris reminds me of and its for the Dungeon Crawl Classics game, its by Mike (wrathofzombie) Evans  and there's a kickstarter for the setting/campaign book and you've only got three day to get in on the action. So for the past two weeks I've been seeing this piece of artwork floating around G+  and I finally broke down and took a look a the Hubris A World of Visceral Adventure Kickstarter. There isn't one square inch of safe area on the plane of Hubris, its weird, wild, insanely dangerous and incredibly detailed. 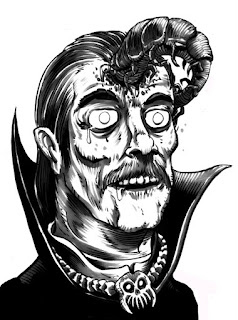 Here's the back story according to kickstater  and the campaign's author :
"Legend states that Hubris was created from the fetid corpse of a long-dead god. Hubris is a land of terrible creatures, grand inequality, strange and cruel gods, dangerous magic, opulent nobility, destitute commoners, people that have become corrupted and turned to savage beasts, constant wars, and worse.
Its kingdoms are not kind or benevolent: In the Blighted Sands the Klind are slavers and openly practice sorcery, offering sacrifices to their depraved serpentine god, Set. Across the continent the Fairweather kingdom is governed by a corrupt and inbred royal family with the nobility following suit. Esenbar is ruled by a staunch xenophobic theocracy that tolerates little outside of their strict doctrine. The barbaric Ingvar of the Frozen Wastes wage vicious battles against the savage frost giants of The Crag, and care little about the goings on of the world; their life is cut from battle with an axe or sword. The Black Queen rules the citizens of the Floating Island of Terror from her throne of bones and dreams terrible machinations for Hubris. Shadowfall, built in the remains of the burrow of a gigantic worm is ran by vampires and their thralls, and welcome all who are devious, vicious and cunning.
There are no easily recognizable heroes in the world. You wander the wilderness or delve into ancient ruins: out of desperation, some crazed need for adventure, or for some bizarre belief that the world can actually be made a better place. Though civilization offers you security and comfort, you shirk those in the hopes of gaining riches and power. But when you die, no one will sing songs of your deeds. You will die a horribly bloody death at the hands of some twisted abomination or by the knife of an assassin sent by some fat, scheming noble.
Your epic tale will be forgotten in days as the dangerous world continues on without you and the apathetic masses stay complacent to dogmatic control of their government. 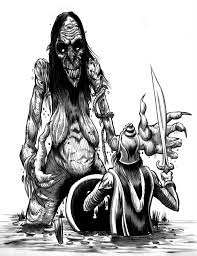 This is not a fairy tale or an epic ballad. This is a savage world. This is Hubris."
I've been quietly looking at Mike's posts on Hubris on his blog today and he knows what he's doing with this setting in spades. He get's its and knows how to weave his setting together to make it compelling and interesting. All of this presents a setting with original races, ideas, monsters, weird setting material and much more. The author has his setting sources in the right place for this project;Hubris is a weird fantasy setting inspired by various things, such as: Alice in Wonderland, Conan the Barbarian by Robert E. Howard, HP Lovecraft stories, Vornheim by Zak Smith, Lamentations of the Flame Princess RPG by James Raggi, Labyrinth, The Thing, Hellboy comics by Mike Mignola, Hellraiser, Evil Dead and Army of Darkness, and not to mention the awesomeness that is Dungeon Crawl Classics and the whole DIY RPG community!
Mike Evans already has a bunch of resources and material that's going into Hubris on his blog right over HERE 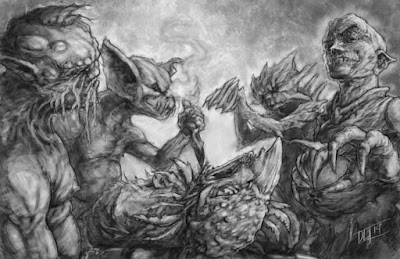 The problem is that you've only got three days to get in on the action, and after  taking a look at this project its going to be time and cash well spent. Do I think you might be interested in this campaign world? If your a DCC fan this one is a no brainer! I wish that I could have gotten in on the action sooner!
Posted by Needles at 7:34 PM