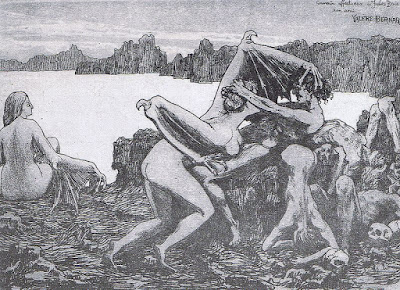 Ugotuturch are a species of undead demonic things that resemble the harpies of myth and legend but wait in the angles of time and space to feed on the souls of the dead whose planes and universes end. They often wait just outside the dimensional threshold for some black sorcerer or wizard to release the forces of Hell when the stars are right. They have many of the qualities of humans but nothing could be further from the black truth. They are inhuman horrors baring only the faintest qualities of humanity. Those who see them know that they are instead demonic mockeries of human form molded in the limbos outside of time and space just waiting for the fleeing souls of man kind to feed upon. And they do feed well. 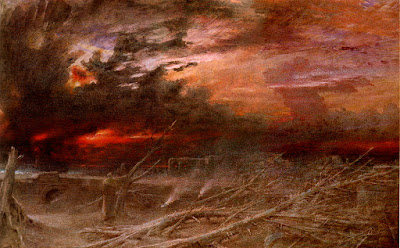 Even demons and their ilk hate the Ugotuturch whom they regard as nothing more then chaotic  vermin  of the worst kind. Ancient parasites that feed on the flesh, bone, soul stuff, and essence of life when they can get it. Ugotuturch means ash or offal feeder in the Black tongue and the basest insults in other languages.
Frequency: Uncommon
No Appearing : 1d6
Armor Class: 8
Move:60" Flight Class: D
Hit Dice: 6
% in Lair: 40%
Treasure: D
Initiative:8
No of Attacks:3
Damage:2d6 Claw, Bite 1d8
Special Attacks: Bite causes disease
Special Defenses:Can create a stinking cloud as per the spell
Magic Resistance: 40%
Intelligence: Average
Alignment: Chaotic
Size: M (6" Tall)
Psionic Ability: Nil
Attack/Defense Modes: Nil
Morale:8

Ugotuturch are remorseless parasites with the faces and bodies of twisted victims of disasters whose bodies bare only the vaguest resemblance to humanity. There  bodies are twisted things of scale and demonic flesh whose limbs end in demonic looking bat like wings with wicked claws that can tear through bone, limb, and even light metal for food. They're mouths are a wicked load of fangs and teeth that rip, rip, tear, and feast. And they do feast well.  They are Ugotuturch are clumsy flyers at best and are greedy self things that will coordinate attacks to take down victims but fight among themselves for the choicest morsels. They have a class D flight capacity and are clumpsy things at best. Some however can be class C or better
Ugotuturch   touch  can causes disease such as the Red Death or plague and their horrid digestive systems can once every three hours release an effect of a stinking cloud as per the spell. Three times per day they may 'gate' in 1d4 of their own kind. They may also pass on their curse which takes nine hours as the victim writhes and is twisted in mutational undead agony as the curse wracks their body in bone crunching horror.  This curse is passed on with a loving minor bite to the limbs or throat of the victim. Protection from Evil and Chaos will keep the Ugotuturch at bay and holy symbols will work on them.
The Ugotuturch  are the basest of horrors and serve several minor petty demonic patron masters as well as at least two major demon god horrors. They love to roost in old ruins, such as abandoned churches,temples, rectories, priories, and other former holy places.  Ugotuturch are the bane of certain holy orders who fight them when and where they can. They use torch, salt,holy water, and Hawthorne wood stakes to kill these things. Areas are often salted and put to the torch so that their taint may not spread.

Call Ugotuturch
1st level black magic spell
Casting Time : one full round
Range :30 feet
Save: None
Effect: Summons 1d4 monsters but there is a 10% chance of summoning 1d6 instead
Spell Resistance: No

This spell is often written in black market or basest wizardly texts to snare the unfortunate. This spell must be written on a tablet and taken to a wasteland to be burned while intoning the twisting words of the Black Tongue to summon the Ugotuturch from the depths of Limbo between the angles of time and space. There is a ten percent chance of summoning far more then the caster bargained for. A small offering of lamb or other offal is advised to have on hand for the monsters for the often come a long way and have been known to feast on the casters instead of serving them. 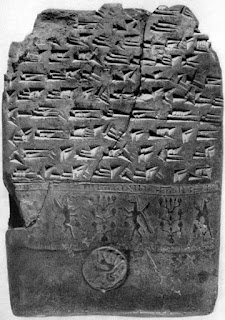