Strange Worlds Issue three is a whole lot of old school science fantasy with all of the right ingredients to get a party of adventurers into the deep end of high weirdness  of comic book style adventures. This issue features not only fantastic art but a whole lot of OSR science fantasy  gaming potential.
Grab It Right Over HERE 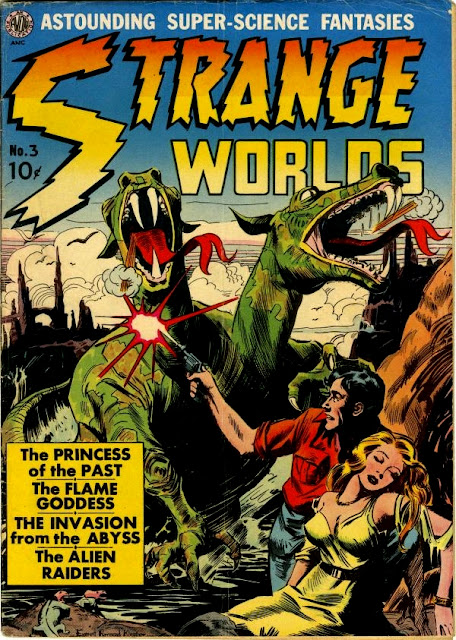 Staring this off is a great splash page and some wonderful artwork pretty much encapsulating the entire retrofuture affair. Kenson of the Star Patrol is one part undercover space patrol action and one part anthology from the bowels of  Flash Gordon. According to Wiki:  One ongoing feature in the otherwise anthological title was "Kenton of the Star Patrol". Kenston always seemed to get the jobs that you'd never find Tom Corbett doing. 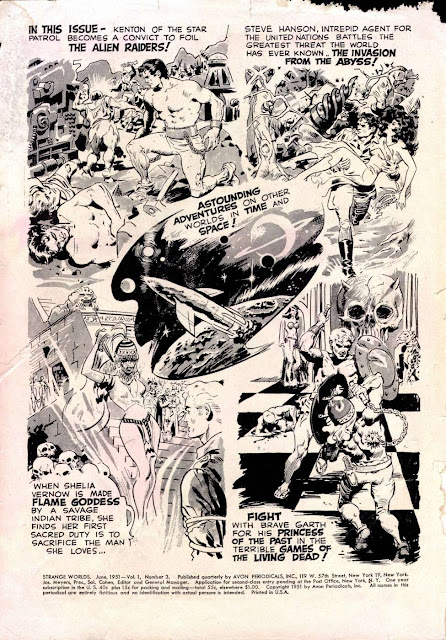 There's lots of retro future action potential with the first feature we've got our hero going deep undercover and getting kidnapped by pirates. These Flann raiders are a pretty damn advanced lot and most likely either a post Colonial group of Martians or a group of ancient warriors used by the space gods in the past who have inherited their technology which includes advanced hyperdrive ships, robotics, and energy beam technology. For a Stars Without Number game their typical raiders which fit the standard game profile for alien pirates. For White Star these guys are 2nd level fighters with a silicon atomic base and they fit the alien brute profile in both games they have to have low arctic temperatures to maintain their best abilities or their at a -2 penalty for all rolls. The race will be out for blood after the events of this issue and most likely have a survival rig for dealing with differing climates. 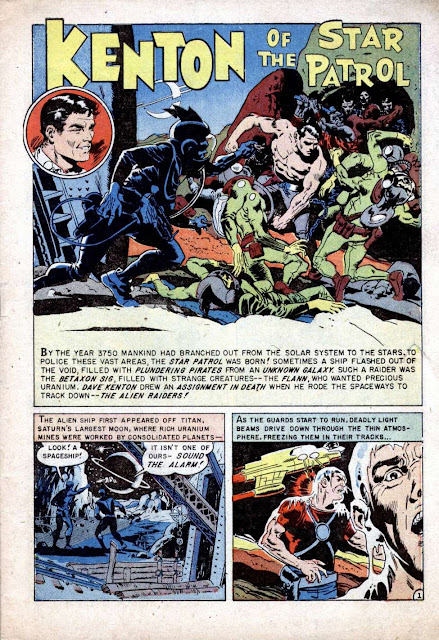 The Flinn colony world offers some very unique planetary and dungeon crawling opportunities for an enterprising DM. This is definitely a relic of a bygone era with lots of weird and interesting bits thrown into the story and plenty of opportunity for a DM to exploit several hooks and draws for adventures. The next feature is the Flame Goddess, what is there not to love about this. A pseudo South of the border weird non historical cult that owes more to pulp and Saturday matinees then any historical events at all. Throw in a dance number and your all set. Let me count off the ways that this little lost world location can be used. One Chicalmo is rife with potential, this lost world tribe isn't as lost world as it seems. We've got modern pseudo Indiana Jones explorer types who stumbling upon a modern cult exploiting what might be a bunch of Derro ruins. You could place any Petty God or psudo Aztec horror right in there and this place is perfect for a pulp Dungeon Crawl Classics game, a Lamentations game, or even an OD&D style exploration. What about those fools featured in this story? Well the position of 'flame goddess' and 'immortal' may have just had an opening. This is a perfect location for your Lovecraftian horror or monster needs. This might also work as the perfect location for an underground vampire or elemental cult. 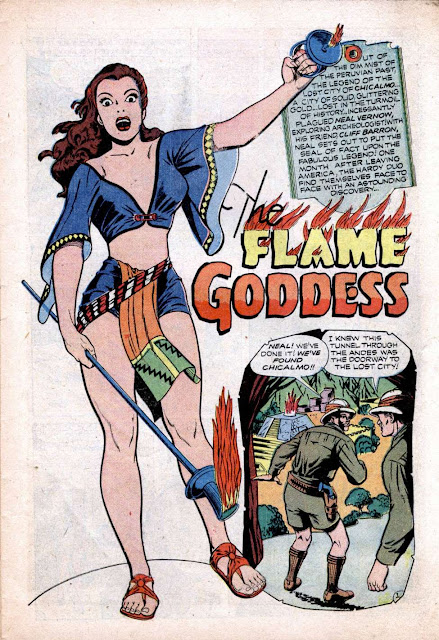 Finally we've got a full scale 1950's Derro invasion with a strain of the little bastards capable of using energy weapons. These guys are nasty customers and capable of using these things to full effect once again we've got a tribe of monsters capable of large scale destruction connected with an underground  colony of Atlantis. This strain of the Atlantians might actually be modern humans who have been kidnapped and subject to the Immortals machines that were left behind after the departure of the space gods. Or they might actually be some of ERB's Martians left behind to safe guard their experiment of Pellucidar. 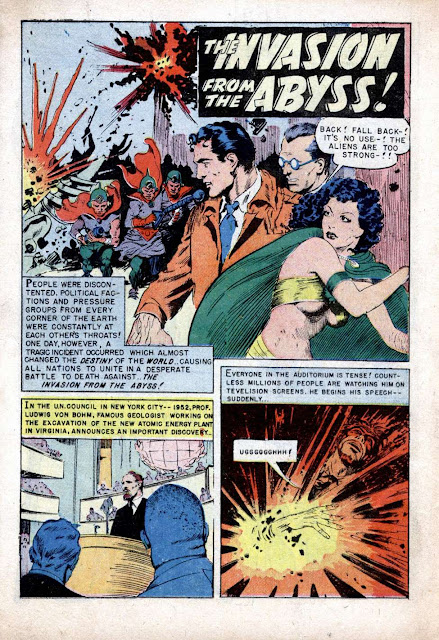 Funny thing but the guards in this one look like 1st level Neanderthal fighters. The real creep of the piece is actually Doctor Pickering whose carrying out the will of his space god or petty god masters. The man not only knows too much and 'things man wasn't meant to know but also the who comic is rife for exploitation. Atlantian super weapons, lost world technologies, Derro cults, etc. This issue of Strange Worlds is really wonderful for use as a resource for retro future or science fantasy gaming. There are at least three locations for lost world gaming that are not only perfect resources but also public domain and rife for a DM to add them into Fantastic Heroes and Witchery as a pulpy set of adventure fodder. A Lamentations of the Flame Princess set of  one shot convention style locations for horror or pulp adventuring, these are also perfect for Mutant Future as locations to add into the wasteland to really mess with PC's or as fodder for an OD&D style game where the PC's are going to have to think and put up with some science fantasy pulp menaces. 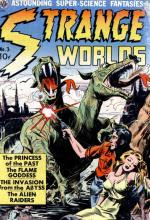