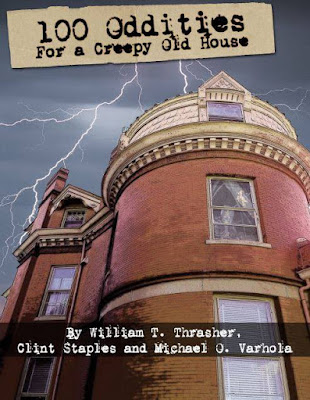 Grab It Right Over HERE for .99 cents

You see a lone ruin in the distance and your group decides to investigate the place. Suddenly that little ruin on the map becomes a side adventure what will you as the DM do? Skirmisher Publishing's  100 Oddities for a Creepy Old House has you covered! So Skirmisher Publishing sent me an updated version of a product that I looked into in the past, 100 Oddities for a Creepy Old House From Skirmisher Publishing is a system agnostic random resource book. Basically this is a set dressing book that with a few flicks of your dice can dress up ANY adventure location that your PC's run across. The book is keyed for houses and random adventure locations, they've updated the pdf with brand new artwork and more.
According to their Facebook page;
"Skirmisher has re-released its Electrum-bestselling "Oddities for a Creepy Old House"!
This revised edition is two pages longer and includes five new pieces of art, re-edited and updated text, improved layout and design, and the addition of an "exploding dice" mechanic to several entries to make them more dynamic."  Even though it only clocks in at twelve pages this pdf has all of the right system buttons to push for because it can be applied for any old school or new school adventure location. Basically with a toss of a few dice you can work up numerous interior contents with incredibly eclectic and dangerous backgrounds for your party of adventurers to run across!

The system here allows the DM to bring the contents of this product  into a wide variety of  venues from the old house in the wastelands to the the interior contents of an abandoned mansion. Numerous objects dovetail into one another and there's plenty opportunity to customize the contents and objects to suit your own whims as DM. Several of the objects can easily lead into the deep end of your own locations by coming from other adventure locations because of the quirky and down right weird nature of the contents and items. This leads me into how the material in  100 Oddities for a Creepy Old House is set up. The material here is set up for both on the fly adventure design and deep PC encounters. Meaning you simply toss a few items into your adventure or built up campaign plot hooks within the adventures based on the objects themselves. 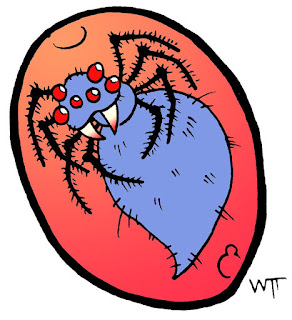 Many of these objects would be right at home in a game of Call of Cthulhu or Chill or even World of Darkness. But for myself I've used this product numerous times with Mutant Future, Lamentations of the Flame Princess, OD&D, and most recently Fantastic Heroes and Witchery. This is one of the things that makes 100 Oddities for a Creepy Old House great. And its not simply objects but also setting stuff such as furniture and the like. For example : "A small, framed mirror hung in such a way on the wall that no one of any ordinary height would be able to see their reflection in it. There is a 50% chance that the mirror is too high or too low."

I've used this product to populate abandoned houses, manor houses and even small villages in a pinch and for use with several weird borderland dreamland locations. The thing is to write down the things that your players are taking and then loop those into further adventures down the road. All in all this one of those products with a multiplicity of uses in OD&D style adventures or science fiction, post apocalyptic and horror games. I'd say that's its well worth the price of admission and then some.