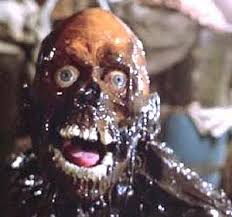 Deep in the wastelands when the wind grows colder and there comes a chill to the air. Old and ancient things stir from long forgotten nightmare borne corners of the wastes. Places where God himself hasn't shown his face in eons, it is from the funk of the preholocaust horror filled nightmares of ages past. Artifacts and items wash into the cheese cloth reality of the wastes. Here are a few of those classic horror movie artifact finds to tease, curse, delight, and horrify your mutant adventurer PC's.