Grab It Right
HERE
Well its finally finished and I've just gotten around to getting this series read after borrowing the issues off of my friend Peter. This is the Shadow mini series by Matt Wagner and it really sets up everything that we know and love about the Shadow. Every old trope and angle of the character is here but new and different as well. The whole series is like a breath of fresh Noir coloured air in an age when the pulp indicative can seem old & somewhat tired. Not so here. The page explodes with vibrant art and the creators know their eras.

Here we are introduced once again to Margo Lane, the double deals, agents, and the power to cloud men's minds. Yet its done with Wagner's pulp style, artwork, and sense of the power of the Shadow and it evokes a sense that in every issue there is going to be more of that foreshadowing of the character. This is the Shadow we need and want as an audience. The events of the series churn with excitement and explode across the page in wonderful art.

Here's a single panel from the series and you can see and feel the emotions of the seconds of violence that are ready to explode in an adrenaline filled moment that any second will be released across the page to be planted in our imaginations.
Wagner is in top form & events of this series foreshadow the events of Grendel vs The Shadow even though the series are completely unrelated. Well sort of.

We are given the Shadow in his 30's element with all of the power of the pulps sweeping across the page with a mix of art and style as much as the statement of  the art of the comic book artist and writer here. The mobsters & villains are vile as well as heinously evil.
These folks deserve every well placed bullet, punch, and hate that the Shadow can muster but this isn't going to be an easy fight and its not.
But yet the mystic side of the Shadow is brought in time and again. While his abilities give him an edge the all too human element of Lamont is right behind the man as well. We as an audience are given a fully realized Shadow and this one would make a hell of a movie.

The dialogue is top notch, the action kick ass, and the artwork as well as the settings drip down with the series pulp roots. This is a fun series to read and pleasure to look at visually because of the pulp comic book eye candy.
I was very lucky to get the chance to read through this one. I personally think you might enjoy it as well.

The Shadow Year One Mini Series
By Matt Wagner For Your Old School Campaigns
Year One from a visual reference stand point for a pulp style old school campaign is a perfect reference point. The ladies fashions look incredible, the locations of the Thirties drip off of the page and a DM worth his salt would be a fool not to look into some of the pulp threads that dangle at the end of this series. Heaven help the PC's if they cross .45's  with the Shadow.

Year One is a visual treat and winds its way through the hero's struggles with all of he elements that will come to define the Shadow as a pulp heroic corner stone. For a  Call of Cthulhu reference point this one might leave the Keeper looking and the DM might want to look instead into Dynamite's The Shadow Over Innesmouth instead. If the DM is looking for a blue print for a set of heroes to struggle against an empire of crime and corruption this might be up their alley.
This series has everything that one might find in the rain slicked streets, the evil of the vilest of villains, and Matt Wagner's sense of the Shadow that weaves its way throughout this mini series until the final bullets spray across the page. All in all this is a hell of a ride for the Shadow fan or pulp slut like myself. 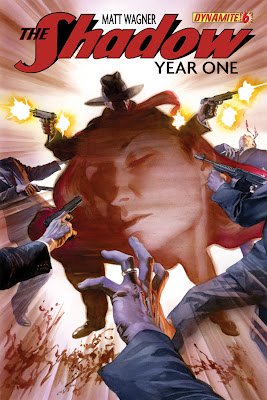