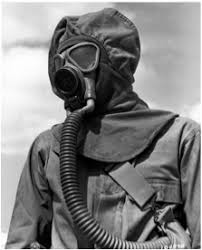 Millions have died in the violence and blood shed of the apocalyptic world that has created the Wastes. Among the ravages of depravity and blood that consumed the world there are millions of paranormal 'hot spots' where mutant adventurers might encounter spirits and ghostly soldiers trapped between worlds. These spirits may have unfinished business or simply be fighting the battles that they have for eternity. Below are a few of the examples of some of the encounters that have taken place in the wastelands.