Grab It Right
HERE
As I'm getting ready to begin a brand new Halloween Lamentations of the Flame Princess campaign, I've been looking around for some fighter variant PC classes and I stumbled upon this free download from Venger Satanis again.
Baring in mind that I'm not working with or for

Kort'thalis Publishing.
This little bevy of fighters isn't bad at all, we've got a Knight Templer, Slayer, and Reaver variation with a few special bits for each fighter and their for use with your favorite retroclone system. Now given that I'm going to be using a near future variation on the Lamentation Of The Flame Princess with some flexibility in a Dark Ressiance horror setting. These are a pretty good fit but I will be adding in black powder weapons.

Each class has a little something some thing that gives the fighter a bit of an edge but nothing that will unbalance the dark fantasy game of your choice. It does exactly what it says on the tin and that's fine with me.
Three Swordsmen gives old school fighters a little extra something... but not the entire kitchen sink!  This is old school, after all.  A few interesting perks should be more than enough to keep both players and GMs happy.
Enjoy these OSR fighter/warrior alternatives, as well as, Liberation of the Demon Slayer, The Baleful Sorcerer of Tsathag'kha, and upcoming module The Islands of Purple-Haunted Putrescence all from Kort'thalis Publishing. 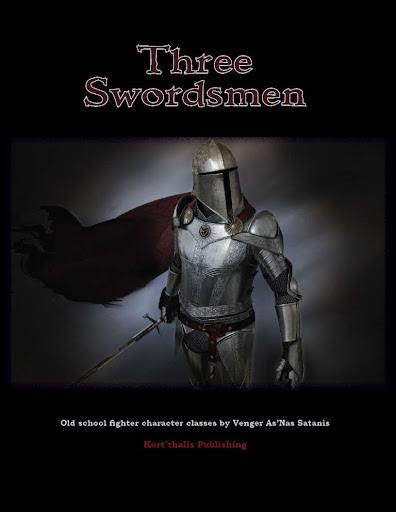 Kort'thalis Publishing has kept these fighter PC packages as generic as possible and that's not a bad thing in my opinion. Each of these packages could be used for PC's and NPC's to provide a wider variety of options for the players and since they are so generic they can be used with little modification or tweaking with your favorite retroclone or D&D edition. Here's where I can see these coming in quite handy :
For a six page free pdf there's lots to work with here. There are a ton of fighter variations already on the market but this is a good selection of fighting men with more of a pulp flare to the classes. I can see using this add on of classes. And its nice to see a bit of thought into a free product. I was thinking of uses for these while I was reading through them. Not a bad take on the fighter, I'd love to see more classes like these from Kort'thalis Publishing but for now I'll take the Three Swordsmen pdf and run with it.
Posted by Needles at 9:53 PM