Edge of Tomorrow is one of the first low key action packed sci fi military films that I've seen on the rebound this evening. I was able to catch this one down in Waterbury tonight at a small venue theater with some friends after work tonight.
Well I was pleasantly surprised at how much of a post apocalyptic alien invasion 'B' movie vibe echoes through this one from the PA Europe to the mecha armored suits to the time travel elements this is a pretty good flick despite the presence of the main lead Tom Cruise. Personally I think that his acting in this one does some something for the sense of desperation that this film has.

Here's the wiki low down on Edge Of Tomorrow:
Edge of Tomorrow is a 2014 American military science fiction film starringTom Cruise and Emily Blunt. Doug Liman directed the film based on a screenplay adapted from the Japanese light novel All You Need Is Kill by Hiroshi Sakurazaka. The film takes place in the near future, where an alien race has invaded the Earth and defeated the world's military units. It follows Major William Cage (Cruise), a military officer inexperienced in combat, who is deployed into a combat mission against the aliens. Though Cage is killed in minutes, he finds himself starting over in a time loop, repeating the same mission and being killed. Each time, Cage learns to better fight the aliens, and he teams up with Special Forces warrior Rita Vrataski (Blunt) to defeat them. 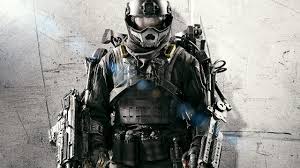 This film is based on All You Need Is Kill a novel by Hiroshi Sakurazaka and on the whole loosely follows the plot of the novel that was translated by Viz comics with a very nice manga. I got a chance to read the graphic novel earlier this year over my friend Peter's place. The manga is a very different animal then the film and in some respects superior to but very different from the Edge Of Tomorrow film :
The story is told from the perspective of Keiji Kiriya, a new recruit in the United Defense Force which fights against the mysterious 'Mimics' which have laid siege to Earth. Keiji is killed on his first sortie, but through some inexplicable phenomenon wakes up having returned to the day before the battle. This continues and he finds himself caught in a time loop as his death and resurrection repeats time and time again. Keiji's skill as a soldier grows as he passes through each time loop in a desperate attempt to change his fate.


The film stars Tom Cruise as William Cage (the film's counterpart to Keiji Kiriya) and Emily Blunt as Rita Vrataski. The setting is changed to Western Europe, with the battle being a strike into Normandy that begins at Heathrow Airport. More details right over HERE  from Wiki.
Post apocalyptic Europe never looked so good, the wasteland is nasty,dangerous, and crawling with Mimics. I can see a group of desperate adventurers crawling through the weird landscape scavenging for mecha, parts, artifacts, and the forgotten mysteries of the alien invasions of this world.

Edge of Tomorrow has a neck snap take on its time travel and a couple of clever bits for its post apocalyptic landscape. The real draw here for me were the armored suits which any old school post apocalyptic DM worth their salt should take a look at. These are the perfect loot power armor to stick into a campaign and their there because of the the very lethal but hardly seen aliens the Mimics. The Mimics are mysterious and almost always in shadow, darkness, and when exploding across the screen are very nasty. But then this is kinda what you want in your mysterious aliens rampaging across the screen in this film. 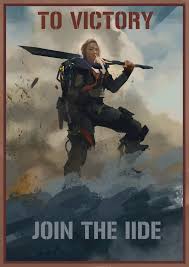 Ever since I've been into the post apocalyptic role playing science fantasy rpgs time and again I've seen the various incarnations of power armor lurking in the background of the artifact the artifact tables. I think that this has to do with the science fiction novel by Robert Heinlein Star Ship Troopers. From Metamorphosis Alpha 1st edition to Mutant Future, right down to the recent  Mutant Epoch rpg power armor sits waiting to be used in some bunker and in this film you can see why. The armor is the only thing that the frail humans have against the bloody swath of the alien Mimics. Seriously even with it some of the humans last tenths of a second and then are done away with by some metallic alien tendrils or whipped apart in a bloody milk shake slurry of wreckage. 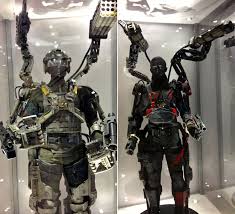 According to the wiki entry on the power armor :
Production designer Oliver Scholl and his team worked with lead builder Pierre Bohanna to develop concept art for several battle suit options based on contemporary real-world powered exoskeleton initiatives like those supported by DARPA. When director Doug Liman chose a design, the team built an aluminum prototype frame that had pivot points and hinges. Costume designer Kate Hawley contributed a gritty aesthetic design for the color palettes and surface treatments. While the design was meant to be utilitarian, it was also created so the actors could be seen in the suits and also run in them. The team created a foam mock-up of Tom Cruise so the frame could be suited for him. The team handcrafted 70 hard material and 50 soft material battle suits in the course of almost five months. There were three versions of the battle suits: "grunts, dogs, and tanks". The battle suit for Emily Blunt's character had red slash marks sprayed on to reflect a Joan of Arc quality.[27]
The battle suit weighed 85 pounds (39 kg) on average. One of the heavier versions was around 130 pounds (59 kg) due to being equipped with a mock sniper rifle and rocket launcher.[5] Each actor needed four people to help put on the battle suit. Initially, Tom Cruise took 30 minutes to put on the suit and another 30 minutes to remove it. Ultimately, the time was reduced to 30 seconds.[27] The Los Angeles Times said, "Between takes, the actors would be suspended by chains from iron frames to take the weight of the suits off their shoulders.'
All of the various old school post apocalyptic rpgs out there that have power armor in them would fit the Edge of Tomorrow atheistic, in point of fact if your going to use this film as a reference point to create your own adventures featuring a similar theme. I'd use the power armor already present within the system. Save yourself some time and energy to create a world where an alien invasion has gone or is going amok. Add time travel as needed.

One of the only things that really ruined this film for me was the PG -13 rating, I'm going into a film with this much action and adventure give me a solid 'R' rating so I can please see more of the world of  Edge of Tomorrow.
Emily Blunt's character was kinda of interesting and really a bit messed up. While she is every inch the armored action hero as Tom Cruise's character and would make a fine NPC for PC's moving through the post invasion landscape. Her emotional skill set has some twists to it. And I think such a character as the one she plays ultimate could carry a picture of this type of science fictional adventure all on her own. Ms. Blunt's character is a good counterpoint to Cruise's inept character that seasons himself through the flow of the time travel element of the film.
This isn't by far from a flawed film but its one that has a lot to offer the DM that needs a shot of alien invasion and post apocalptytic weirdness to their movie going and rpg inspiration.
All in all I was quite surprised by this little Summer science fiction sleeper. 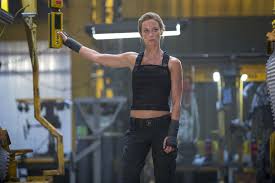