Review & Commentary 'The Bastard King' By Sílvia Clemente, & Miguel Ribeiro From The Red Room For The Wretched Époque Rpg

"In the last months it seems a strange "epidemic” of suicide has taken over Paris, the authorities are trying to ignore it, but a small disturbing detail can't be overlooked forever: The  corpses of the afflicted were all marked by the same strange sign. Some call it the Sign of the Bastard. Its connection with a famous operetta titled The Bastard King will lead the characters down a road paved by peril and madness. Can they stop the Bastard King before becoming his next victims?" 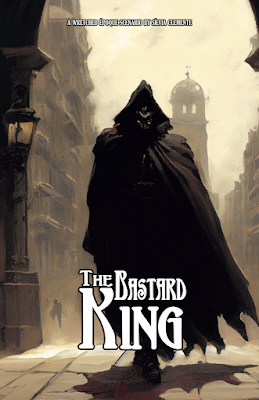 The Bastard King is a really nasty little romp of an adventure from Sílvia Clemente, & Miguel Ribeiro From The Red Room for their Wretched Époque Rpg.  'The Sucide King' should be the name of this adventure as the PC's are led deeper & deeper into a mix of Robert W. Chambers mythos & the world of Parisian opera with a dash of adult horror thrown in! Murder or suicide?! The question comes deeply into play within Paris in the Bastard King. The question haunts the first part of this adventure deeply. And it's the Bastard King's demonic influence that laces it's way throughout. This colours & tinges everything around it within the demonic Chamberian madness that comes down on the characters heads like a house of cards.
The Bastard King is dynamic & Operatic at the same time lending itself to the fiction that Robert W.Chambers presented originally.

The Bastard King's NPC's NPC cast is both central & front 'n center to the horror action & very well drawn out by the by Sílvia Clemente, & Miguel Ribeiro's writing. This cast is very much within the Parisian & drawn into the action surrounding the Bastard King. 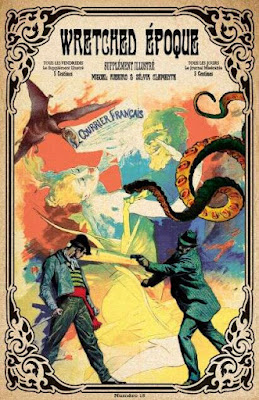 There's both a ton of investigative work & action within this adventure centering itself as a part of the Wretched  Epoque rpg.
The idea of madness incarnate running rampant within Paris society at all social levels is scare enough but adding in some of the encounters & horrors contained there in.
The Bastard King is very well written & layed out. Up to the usual standards of the Red Room.

The question becomes if the player's PC's will be the investigators or the victims of the Bastard King's wraith & influence. The Bastard King puts the terror back into Robert W. Chamber's creation & up within the Red Room's Wretched Époque Rpg product line. A solid entry within the ever widening range of Sílvia Clemente, & Miguel Ribeiro's creations! The question is will your PC's survive?!

'The Bastard King' By Sílvia Clemente, & Miguel Ribeiro From The Red Room For The Wretched Époque Rpg Is Available Right Over Here