The battle against the slavers continues! You and your fellow adventurers have defeated the slavers of Highport, but you have learned of the existence of another slaver stronghold, and you have decided to continue the attack. But beware! Only the most fearless of adventurers could challenge the slavers on their own ground, and live to tell of it! 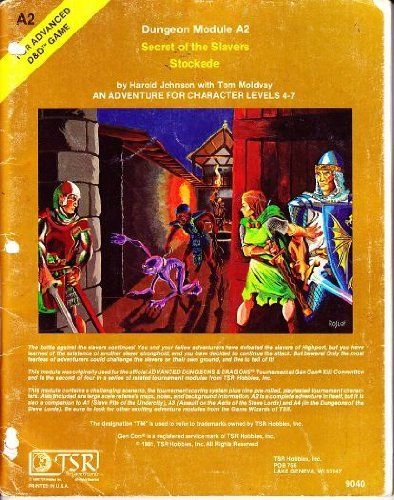 Secret of the Slaver's Stockade was the Summer of 82's most dangerous module for me where five PC's died and the spider cult wasn't doing resurrections. A2 Secret of The Slaver's Stockade puts the party in the middle of the conflict with the 'slavers' in the Drachensgrab Hills & one of their fortresses

"Secrets of the Slavers Stockade was published by TSR in 1981 as a thirty-two page booklet with an outer folder, and was written by Harold Johnson and Tom Moldvay.[7] The cover artwork by Jim Roslof features a drawing of two hobgoblins, one of which is a sergeant with a leashed boggle, and a party of adventurers."

The entire module smacks of a solid Sword & Sorcery style affair in the vein of a Robert Howard Conan story. There's lots & lots of Orientalist Hobgoblins throughout A2. This is one of those modules that has a strange other wilderness feel that ties in with the pulpy corruption of T1-4 The Temple of Elemental Evil. This makes A2 Secret of The Slaver's Stockade perfect for using with a Barbarian Warlords of Greyhawk campaign. The fact is that hobgoblins are a perfect up tier monster from the traditional 'pig faced orcs' that most starter AD&D first edition adventures seem rife with. I've always thought of Dungeons & Dragon hobgoblins as semi demonic left over monsters from the Pre- Biblical Flood years who had a Mongolian style empire ruled by elite 'demonic Orge Magi wizard tyrants'. The society's Fall came with the Flood & they've never quite recovered. 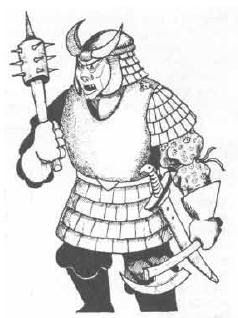 I’m using material the playtests version of the Heroic Fantasy & Barbarian Conquerors Collection. Now given some of aspects of A2 Secret of The Slaver's Stockade its easy to see that the technological levels late Roman Empire of ACK's easily though out the module. Its quite easy to see that the PC's are going to have several adventure messes through out the module with some side puzzles & minor side quests. There are several locations in A2 Secret of The Slaver's Stockade module that could be seized as holdings by the PC's. They'll need to leave behind trusted hirelings to control them. These are perfect areas to act as tribal ins for warriors to breech into the lands that the hobgoblins have seized control of. These wildernesses areas of Drachensgrab Hills seem the type of areas that have been infected with the Chaos energies of the Temple of Elemental Evil. There are tons of monsters that seem to dip on the pulp bucket; things such as the the boggle, the cloaker, the haunt, and the phantom. These would later feature in the Monster Manual II & could be used to highlight adventure encounter to foreshadow the next adventureAssault on the Aerie of the Slave Lords. 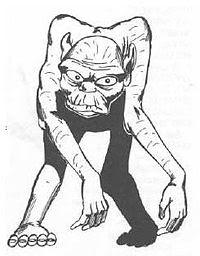 A2 Secret of The Slaver's Stockade is one of those modules that's completely centered & plugged into the Greyhawk campaign setting's wilderness. The adventure features an overland wilderness  of 110 miles (177 kilometers) through the Drachensgrab Hills  and offers plenty of opportunities for adventurers to get in way in over their heads. So could the monsters of  'the Drachensgrab Hills '  appear in Hyperborea of Astonishing Swordsmen & Sorcerers of Hyperborea Second Edition?There's a perfect opportunity to connect the tunnels of the dungeon in  A2 Secret of The Slaver's Stockade unto AS&SH Underborea. The cloakers of A2 Secret of The Slaver's Stockade's tribes might be perfect dimensional travelers who are taking advantage of the chaos of the Temple of Elemental Evil to raid both worlds! 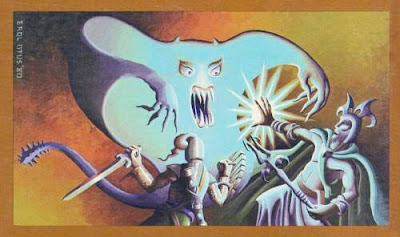 The material in the playtests version of the Heroic Fantasy & Barbarian Conquerors Collection  really has several systems that allow one to add classic TSR adventures into home campaigns. These include several to help flesh out the plunder, tribal status, & how it affects both the party & community. A2 Secret of The Slaver's Stockade remains an old favorite because its very easy to adapt as an adventure to many classic AD&D first edition games as well as D&D first edition with some adaption on the dungeon master. 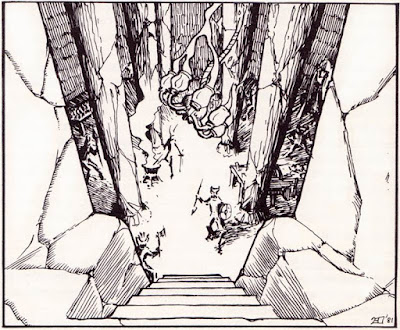 Dungeon stairs by Erol Otus, from AD&D module A2 Secret of the Slavers Stockade
Posted by Needles at 7:08 PM