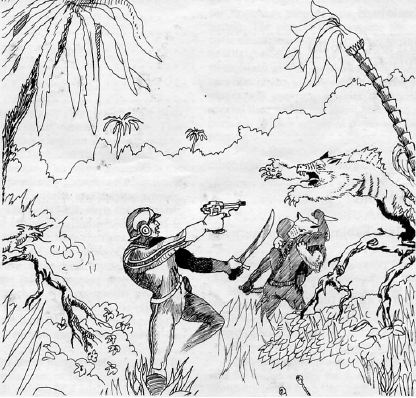 So last night I was messing around with Grey Elf's Classic Edition website, for our Halloween gam, The  Halloween game has been moved because of work scheduling. So let's talk about planar echoes & times from the Starship Warden which have allowed a number of alien races through the gates before they've collapsed. And its actually S3 Expedition to the Barrier Peaks by Gary Gygax that may hold some of the keys of this dark end of the Warden. 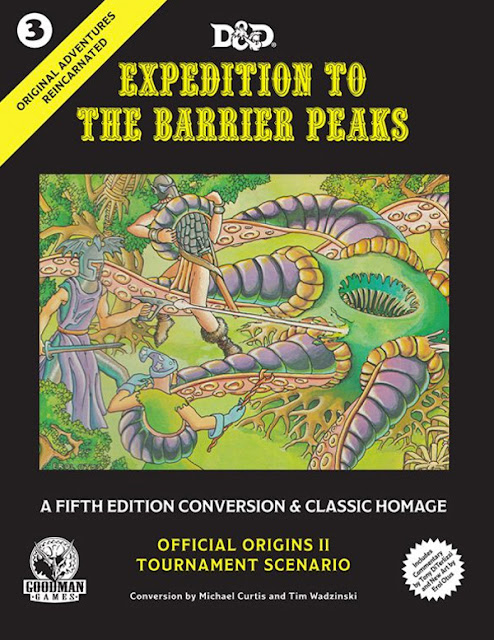 The recent Goodman Games Classic Reincarnated #3 S3 Expedition to the Barrier Peaks had some interesting additions to the original module which gave alternative & addition materials. And there's the fact that we have no idea what may have happened aboard the Warden Science spacecraft. But one theory that  recently floated across the table was the fact perhaps ' the Mihalli' of Empire of the Petal Throne rpg fame from Dragon magazine issue #4 may have something to do with the crash into the Barrier Peaks. The Mihalli are ancient aliens who were some of the Human Empires oldest allies;
"The Mihalli are an ancient nonhuman race which came with humanity to Tekumel — but not with humanity’s knowledge or blessings! When the planet was cut off from interstellar humanspace, the Mihalli, who had set up a small spy post beneath the planet’s surface, were cut off as well and could not return to their original world." 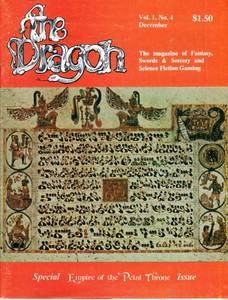 The Mihalli are also absolute enemies of the mind flayers one of the alien races aboard the science & ecological vessel of the Warden. These horrors are thought to be the root cause of the crash as the player's PC's try to stop their machinations. 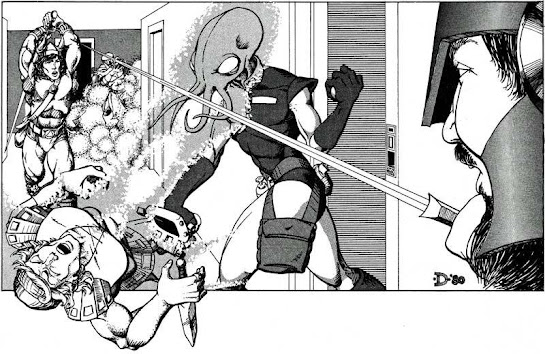 Illustration by Jeff Dee and used without permission
Recently while plying through Tekumel.com's forum I came across this post by Master Fulat's form post  regarding his reading of  Phil's Pe Choi essay, relevant sections of which follow; "  Long before Man had stretched out his hands to the stars the PÃ© ChÃ³i had developed space flight and the torque-stress interdimensional drive.
... It was on the advice of the PÃ© ChÃ³i that Man steered away from the deadly worlds of the HlutrgÃº, then a localised but ferocious and powerful spacefaring species. They were again instrumental in keeping human ships away from Pelagus (sigma Sagittarii), which was inhabited by a race so dangerous and inimical that no species could approach them with impunity. [who are these inimicable beings???]I've also found some intersting snippets in the blue room archive. This section on races for instance....Humanspace included other citizens as well: the Pe Choi (whose scientific abilities had made intersteller travel feasible), the Ahoggya, who built great, boxy, bumbling merchant ships that bought stuff that other races treated as vile waste; the Shen, whose own fleets ranged far from their home system; the Pachi Lei, Swamp Folk, and Hlaka, whose cultures were smaller and less technological, but who had the capability to take Pe Choi technology and construct their own merchant fleets' the Tinaliya, who were intensely curious but who were so logical that they never developed an aesthetic or spiritual understanding at all. Etc. Still other races may also have existed within this sphere, including some that were hostile to Humankind."

There question is are there far more deadly beings in the void between places where the Book of Ebon Bindings talks about?! The answer to this is that I believe so.  So are the froggies that we talked about last blog entry & the mind flayers only the tip of the ice berg?! The answer is yes. 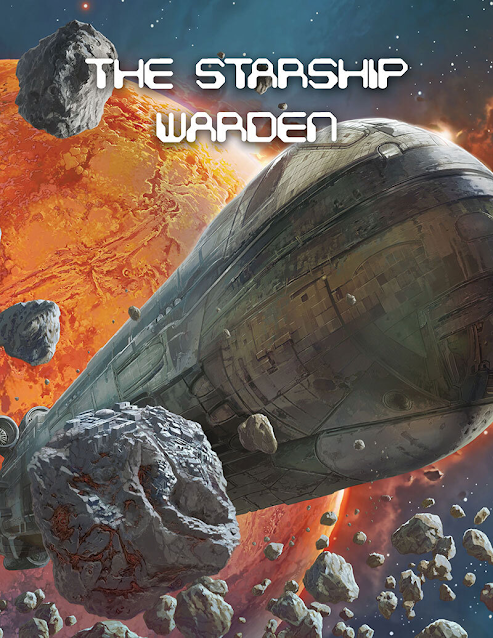 For Troll Lords Starship Warden this means that there may be far more dangerous horrors lurking in the shadows of the ship then even the mutants & cyro passengers release!  Perhaps the only ones who might be answering are the demons spoken of in the 'Book of Ebon Binding' and they may not be talking to the PC's.
Posted by Needles at 10:32 AM

Email ThisBlogThis!Share to TwitterShare to FacebookShare to Pinterest
Labels: Empire of The Petal Throne Rpg, OSR Commentary, S3 'The Expedition to the Barrier Peaks', The Book of Ebon Bindings, The Starship Warden rpg