"A long journey under an azure sky filling with brackish, boiling clouds ends at a large oak tree. Here, from a muscled branch, a man hangs limply by a thick rope strangled around his neck. Beyond, a dim, rising, yellow moon silhouette’s a village. Snaking, ashy tendrils of smoke coil above rooftops, lights glitter in windows while a miasmal fog creeps down upon the village from freshly churned fields. Then, as sudden as lightening, a fife and fiddle begin a joyous tune. This stops as abruptly as it started. All that now can be heard is a rope straining and groaning with the weight of the hanged man.

A bizarre and humorous adventure where absolution is as important as keeping one’s head." 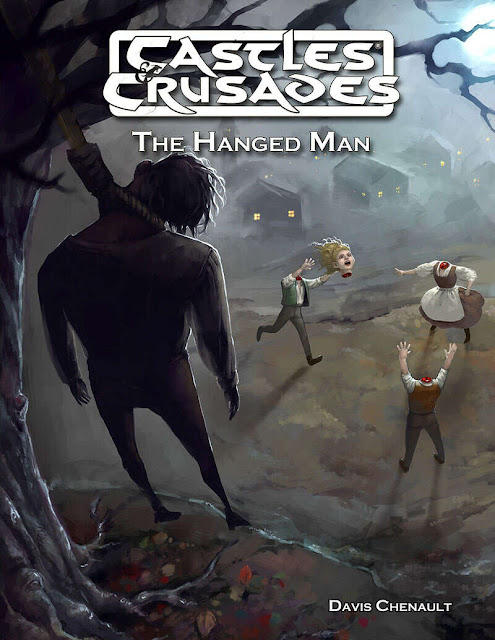 'The Hanged Man' adventure module clocks in at a twenty one page & a mid tier PC adventure that has a darkly humorous bent. But this adventure is pretty dark within it own right. 'The Hanged Man' this adventure is designed/written by Davis Chenault, so it could takes place in Inzae, the sort of more grimdark sister world of Aihrde. While this is a mid tier module its NPC's, encounters, etc. are all centered around itself. 'The Hanged Man' the adventure could be used for Ravenloft, Greyhawk, etc. or at the edges of Jim Ward's Tainted Lands'. The central adventure elements really could point up the dire influence of the Tainted Lands.
And in point of C&C's 'The Black Libram of Nartarus' by Casey Christofferson relates to a grand book of evil. And 'The Black Libram of Nartarus' could be the portal between the Tainted Lands & 'The Hanged Man'. The Tainted Lands could in point of fact be the point of horror & nastiness that overlaps the Haunted Highlands setting. The elements of the 'The Black Libram of Nartarus' recall the Haunted Highlands setting. And these can call back to Davis Chenault's 'Hanged Man'.
Davis Chenault's 'Hanged Man' is a very tight & well written mid level adventure. There are some real opportunity for role playing & NPC interaction. The campaign addition of 'The Hanged Man' allows the PC's to transition between tradition D&D style adventures & a comedic or  horror game. This style of play are up to the  the players & the DM.

'The Hanged Man' is solidly done & highly recommended. The writing is tight, the encounters quick, the central core of the module solid, and the reasoning of the 'Hanged Man' is both fluid & weird enough to keep the players coming back for more.
Davis Chenault's Castles & Crusades  'The Hanged Man' adventure module Is Available Right Here.
Posted by Needles at 10:38 AM