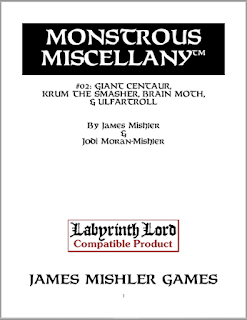 Monstrous Miscellany #02 brings to the table the " Giant Centaur – A giant creature appropriate for Lost Worlds and Mysterious Islands.

Krum the Smasher – A monstrous godling who does nothing but smash the works of civilization leaving ruin and suffering in his wake.

Brain Moths – One eyed, one tentacled, flying purple brain eaters from another dimension

Ulfartrolls – Born of the union of lycanthropic witches and trolls, these berserker beasts surpass their ancestors in their wickedness and might!"
So the Mishlers on a roll because these monsters are a fit for a  number of OSR Pulp & Old School game campaigns.
Many of these monsters are straight out of mythology, literature, & legends. For example Giant Centuars are straight out of Dante's Inferno & while they are listed as neautral these monsters could easily be converted over to the Inferno version. Here's a bit of background on these horrors; 'Giant centaurs resemble normal centaurs in that they are the combination of a humanoid and quadruped, but they are not merely up-scaled centaurs. They have the body and legs of a baluchitherium with the torso and arms of a hill giant. They stand 10 feet tall at the point at which the hill giant torso emerges from the shoulders of the baluchitherium body, for a total height of about 16 feet. Their hill giant torso, arms, and head have grayishbrown skin, with grayish-black hair and mane that flows from their head, down their back, to merge with the grayish-black coat of the baluchitherium body. They resemble neanderthals more so than ogres, with prognathous jaws and large, heavy brows." According to Dante's Infeno; "The Centaurs--men from the waist up with lower bodies of horses--guard the first ring of circle 7, a river of blood in which the shades of murderers and bandits are immersed to varying depths. Armed with bows and arrows, thousands of Centaurs patrol the bank of the river, using their weapons to keep the souls at their allotted depth (Inf. 12.73-5)" 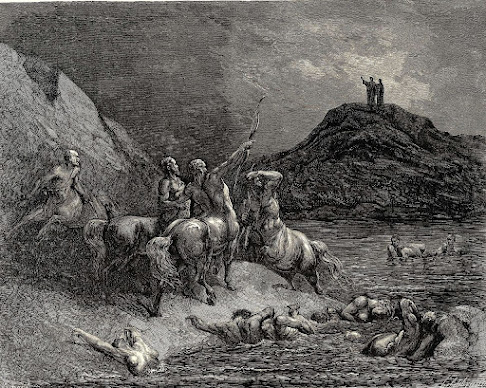 Are we saying that 'giant centuars' were taken from Dante's Inferno?! Nope, I'm saying that James Mishler has created some really great monsters that can be easily adapted to your campaign, dungeon, or old school games. Ulfartrolls would not be out of place within a Lamentations of the Flame Princess rpg session. Ulfartrolls as  monsters are absolutely brutal & dangerous. Brain Moths fit the bill for Carcosa or a  Science Fantasy adventure. All in all for a dollar this is a really nice piece of rpg value & ulitity..