"The Celebration of the Black begins with the unfurling of the Banner of the Black Moon. Delivered to the streets of Bergholt by the gods, the Banner is raised high and paraded through streets and alleys for all to see. Everyone dons mask and cape, lights fires and burns incense, imbibes and enjoys a bacchanalia, only to be followed by deeds of heinous nature, murder most foul in dark alleys, killings and slaughter abound such that the night ends in dread and terror. 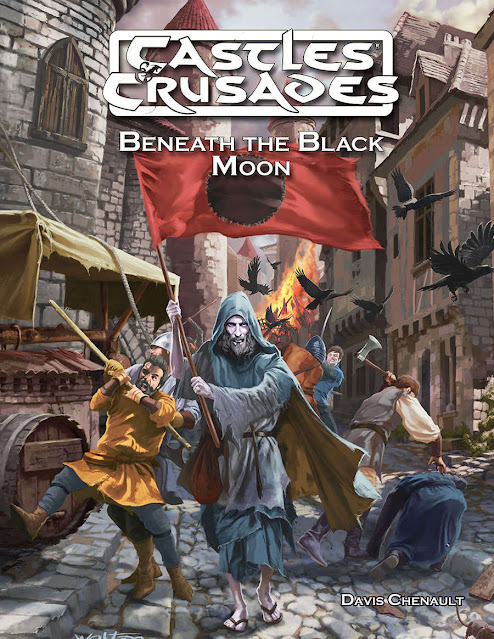 What brings the Black Moon?"

Davis Chenault's 'Beneath the Black Moon'  isn't an adventure that you hear a lot of talk about. That's too bad because its a really solid mid tier adventure for Castles & Crusades PC's levels three to six. And 'Beneath the Black Moon' picks up from where Castles & Crusades By Shadow of Night leaves off. The setting of  the City of Bergholt is a sort of mid point pseudo European country that adventurers always seem to stumble upon. And it reeks of criminality, backroom deals, scummy nobility and more. 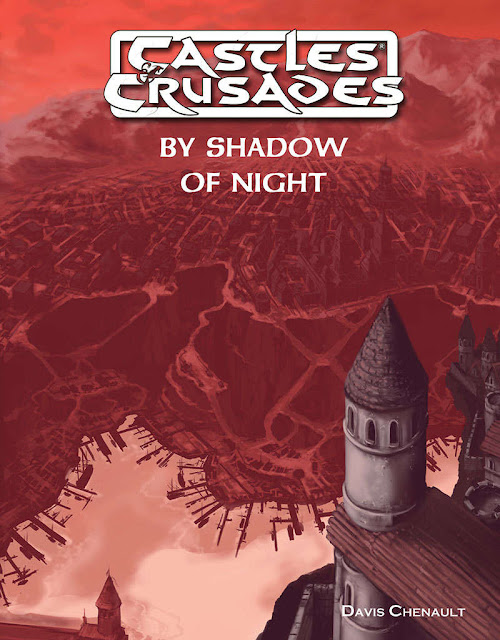 Inzae reminds me of Middle Ages Europe in the midst of the flowering of history. Things & history are changing, the old ways are dying, and almost everyone is trying like Hell to hold a candle to the darkness. According to the Inzae primer; "Observations, Notes and Commentary of Fodius the Fishmonger (deceased) on the World and People Before aught, the Dragon Inzaa existed. In the vast emptiness, Inzaa grew restless and wroth and began to spin upon herself. Such a violent thrashing and churning did this become that the Dragon ripped a shred from the fabric of nothingness and from this hole all manner of energy and matter spilt into the universe in a savage, churning vortex: the Maelstrom. Inzaa twirled about the Maelstrom for ages untold as time and space and matter and energy were cast off into the universe. Thus the beginning of worlds . . . . Inzae is a primer for a savage world of dark design. A land forged by the rage of a dragon. A land both harsh and cruel, where life is short and brutal ..." So the whole affair reeks of a world circling the drain of history. But Inzae is a world of a sorta of stability amidst the tides of the gods & history. Davis Chenault's 'Beneath the Black Moon'  takes this up & runs with it. Now I've got a physical copy of  'Beneath the Black Moon' & its not missing that key map. And the adventure itself is nicely done. Is it Halloween fare?!  Well yes & no. Remember those regions of stability within TSR classic Ravenloft second edition setting?! There were no monsters per say (even though there were). Well, Beneath The Black Moon presents other more dangerous foes and NPC's. Inzae should be called the sunset world. Because as soon as the sun sets your PC's are in for a Hell of a time. Highly recommended..

Davis Chenault's 'Beneath the Black Moon' Is Available Right Over Here..