So I was zipping round the Piazza as I'm apt to do and ran across this thread about Arduin here by Bobby Knock but it was Blackbat 2442 who piqued my interest in this 2012 post; "The "setting" was the World of Arduin... a planet with a recorded history several hundred thousand years old (not detailed very fully, more just outlined). Some historical details from millennia earlier showed up in ancient books and so on, others were legends and religious doctrine, and so on.

Arduin also sat at a multi-dimensional nexus, so races from every part of the "multiverse" (yes, that exact word was used early on) found their way to Arduin... and adventurers could travel to all those universes as well.


The Ta'Vreen were explicitly stated to be members of a star-faring technological race (from another dimension), temporarily marooned on Arduin... immune to magic and equipped with tech weapons & devices.

Then there were things like the Vampusa... yep, that's right. Medusas that are also vampires! 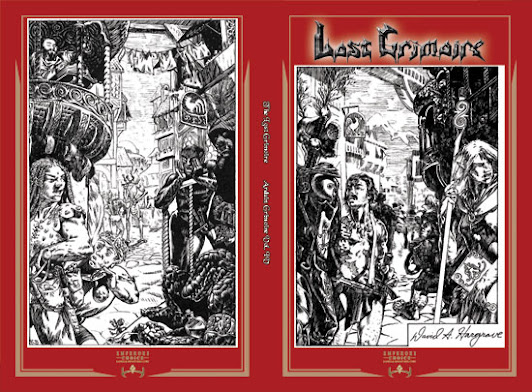 Grimoire IV (1984) has a section on "Integration of Arduin rules in other role-playing systems"." Yes it was the talk of Dave Hargrave's Grimoire IV (1984) that has my interest. Now you'll see lots of videos & essays on the three other little brown books. But hardly anyone talks about Grimoire IV The Losr Grimoire. And this one is one of my favorites & probably the one that has had had some of the most workout in my hands. Why?! Because Dave Hargrave's Grimoire IV (1984) has some of his best DMing & gaming philosophy. Sure there's a ton on of Arduin material but this one gives the DM the integrated philosphy of Mr. Hargrave. Which really does picking from column A. & column B. of the Arduin books & that's actually alright. But what's actually in Grimoire IV (1984)?! Well that's the other interesting bit ; "The Arduin legacy continues with 147 pages jammed packed with new ideas, tips and tricks to delight even the most discriminating gamers.

* 40 new arcane spells, conjuration's and divine rituals, as well as a look at seven (7) new specialty mages and their craft.

* New character races, such as "Swampers", "Red Dwarves" and the rarest of all Arduin races - the mysterious and elusive "Tzikki" folk.

* 25 new horrific monsters to challenge even the most accomplished adventure seekers.

* A short jaunt into the undercity and lunch at "Dirty Dorgs", one of Arduin's most notorious restaurants - where anything can be had for a price!"
Mr. Hargrave was nothing if not prolific & this book has a ton of good stuff including some solid alchemy items. Arduin is not so much a setting as it a series of campaign ideas infecting other gamers OSR & old school adventures. The fact is that so much brought out by 'The Lost Grimoire'. Many of the adventure & campaign elements within the book are central to Arduin. But the main philosophy of the book boils down to 'Take this & try it'. No arm wringing or pulling or deep artistic lectures. But down to Earth practical knowledge of game play & DMing. And that's really the essence that Dave Hargrave is trying to put forth within the  Arduin Grimoire IV 'The Lost Grimoire'  from  1984.
You can grab  Arduin Grimoire IV 'The Lost Grimoire' Right over here..