Review & Commentary On T2000 Fanzine- You're On Your Own No. 1 From Game Designers' Workshop (GDW) For Twilight 2000 original edition

"The War has raged for years The high-tech ammo is almost gone. High-tech equipment is failing, piece by piece, with no spares to fix it. The front lines are held by a few grim, desperate soldiers.

The US 5th Division holds the line in Poland. Now, a Soviet encirclement has cut it off in a province ruled by ambitious warlords, local militias, and bands of marauding deserters. HQ is 200 klicks to the rear and powerless.
Your last order sets you free...

Good Luck. You're on your own." 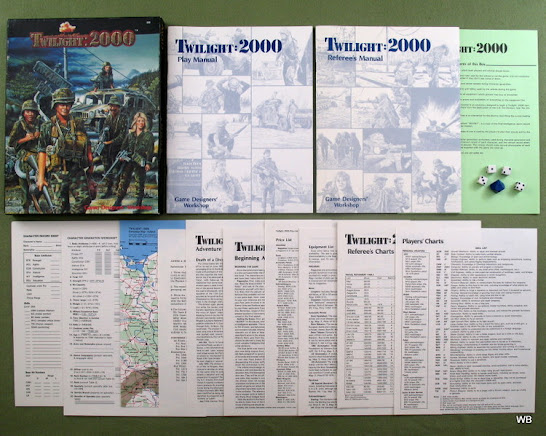 And with those words the Rpg Twilight 2000 came into being from Game Designer's Workshop. And life was never the same again. Twilight 2000 was innovative, &a  very stark a product of its time in Ninety Eighty Five. I remember seeing that reveal in Dragon magazine. Wayne's Books has a whole reference section on Twilight 2000 here. They'll be a whole other blog post on memories of Twilight 2000 rpg another time. Needless to say that there's a whole fanatic cult following of the game to this day. And this brings us to the free  T2000 fanzine issue #1  that we discovered very recently. It reminds us of the 'Eternal Soldier' fanzine that Game Designer's Workshop put out. 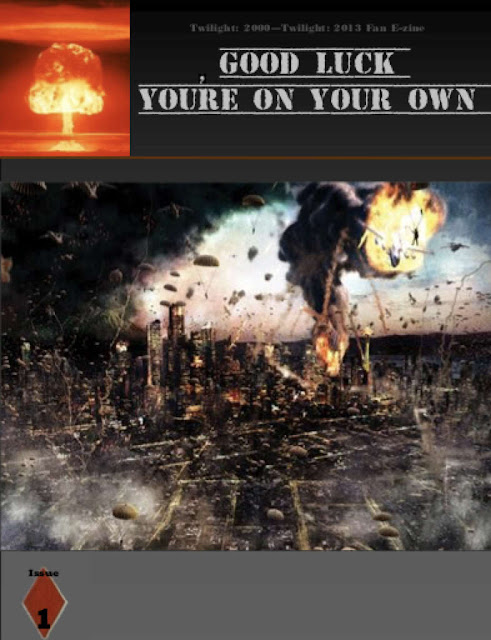 This is another fanzine that is more then the sum of its parts, the articles within    T2000 fanzine issue #1 are great. They update what's been happening in the world of T2000 since the war's beginning. We get 'The King's Messengers' by James Ross with James Langham gives us an article on the role that the U.K.'s royal couriers play in the world of T2000; "Able to trace its origins back to 1485, before the Twilight War the Corps of King’s Messengers (or Queen’s Messengers when the Sovereign i s femal e ) w e re diplomatic couriers, many of whom were retired military personnel, who were employed by the British Foreign and Commonwealth Office to hand carry secret and important messages from London to British Embassies and Consulates around the globe." Its interesting & full of possibilities.
'The Armory' Rifle round damage & tables by Peter Grining are essential for the T2000 enthusiast. Good stuff for upcoming games & designing adventures. Areas of operations presents Iran & the Third World by Jason Weiser a very well presented article. Again solid articles with lots of adventure potential. Areas of Operations presents Africa by Raellus a gent whose name has been seen in various Twilight 2000 rpg forums over the years. A very well researched article and brimming with lots of potential.  James Langham gives us more U.S. Air Defense Vehicles in the Motorpool section. Twilight War Naval Forces by Matt Wiser gives us a neglected military force in T2000. Again lots of possible ideas circle this one for me. Grab T2000 Fanzine- You're On Your Own No. 1 From Game Designers' Workshop (GDW) right here.

And there's an advertisement for Tw2000 rpg combined book by Far Future enterprises. 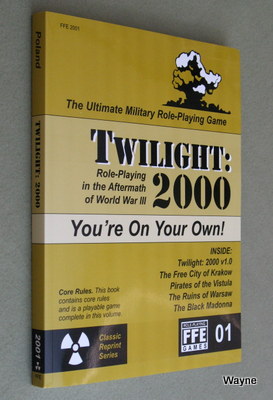 We've played with this book going back to 2012 or so, this is the preferred version of the game because it contains everything that's needed to really give the Twilight 2000 rpg a go. So why Twilight 2000 important? Because for years now we've used it as a reference & back door into original Traveller rpg as a military alternative Earth add on. No lies here its been in circulation among the crowd of players here for years. 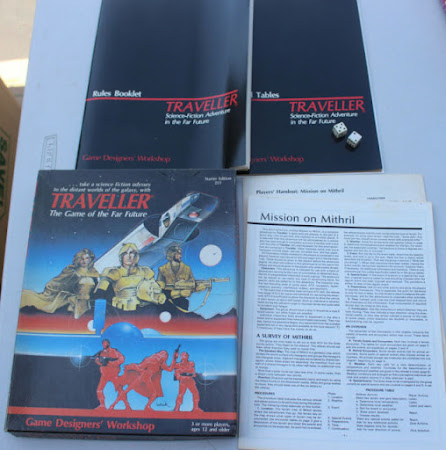 Email ThisBlogThis!Share to TwitterShare to FacebookShare to Pinterest
Labels: Far Future Enterprises, Game Designer's Workshop, Twilight 2000 rpg, You're On Your Own No. 1