" Like in every other aspect of life, when summoning ideas for fantasy role-playing games, there is always room for new original ideas and pushing of the boundaries of your very own monster inventory."
Monsters are like patato chips one can't have enough & in this case its question of adding in an original monster book with a difference. That difference is two strains of mythology & a bit of Cryptid goodness to add to your OSR or old school campaigns. 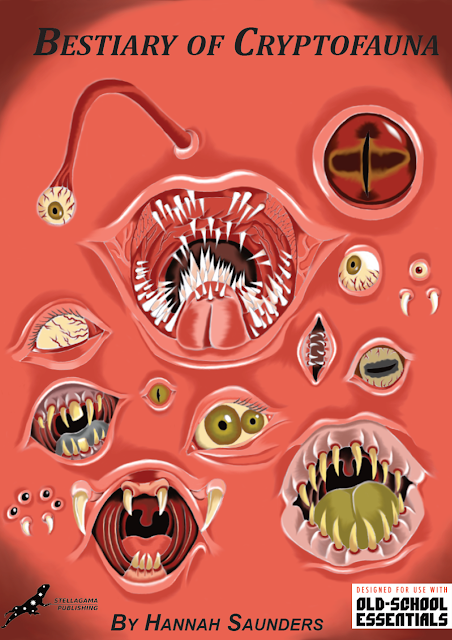 The Bestiary of Cryptofauna is one of those monster books that comes out of nowhere squared to sting you between the eyes. Hannah Saunders isn't an artist or writer  that I'm too familiar with but Stellagama Publishing is one of my all time favorite Cepheus Engine rpg publishers. So when The Bestiary of Cryptofauna  appeared in my email  maybe it was time to take a quick look & its a nice little selection of monsters for B/X Dungeons & Dragons game or an OSR retroclone. This book clocks in at forty six pages with all of the monsters illustrated. The monsters have been created with BX Essentials in mind but could easily port over to Advanced Dungeons & Dragons first edition. Here's a good example with the plastic elemental;

"ELEMENTAL, OIL/PLASTIC
Armor Class: -2[21]
Hit Dice: 16 (72hp)
Attack: 1x blow (3d6)
Movement: 60’ (20’) in solid form or 180’ (60’) in oil form on water
THAC0: 8[+11]
Saving Throws: D2, W2, P2, B2, S4 (16)
Morale: 10
Alignment: Chaotic
XP: 3250
Number Appearing: 1(1)
Treasure: None
Oil elementals resemble either headless, plastic humanoid figures with hands and feet resembling modern-day plastic play-bricks, or liquid oil stains which form waves that crash on any creature attacked, only to reform in the next round. In their solid form, plastic elementals can cross a body of water at a speed of 15’ while floating, and in their liquid form at a speed of 60’. Oil elementals are evil by nature and often serve as henchmen for malignant warlocks and monarchs. They also bear hatred towards marine creatures such as whales, seals and sea turtles, as well as fish.
• Flammable: Oil elementals take double damage when attacked by fire (including fire elementals) in both forms. This will set them on fire, causing them 1d8 damage per round of burning, but increasing their damage by 2d6 per attack.
• Oil over water: Oil elementals cause an additional 1d6 damage when in oil form against creatures in water."
So overall this a forty six page creature catalog with a very overall flow of monsters for old school campaigns. I can see adding these into any Mystara campaign with little difficulty and there's some really well thought out original monsters. You wanna add a monsters that the players are not familiar with into your Mystara adventures then this is the book to use.

The Bestiary of Cryptofauna is a fast, easy,breezy to use monster book to populate adventures & dungeons with. Want to add in some prehistoric creature or unexpected megafauna  to X1 Isle of Dread then this book has it. 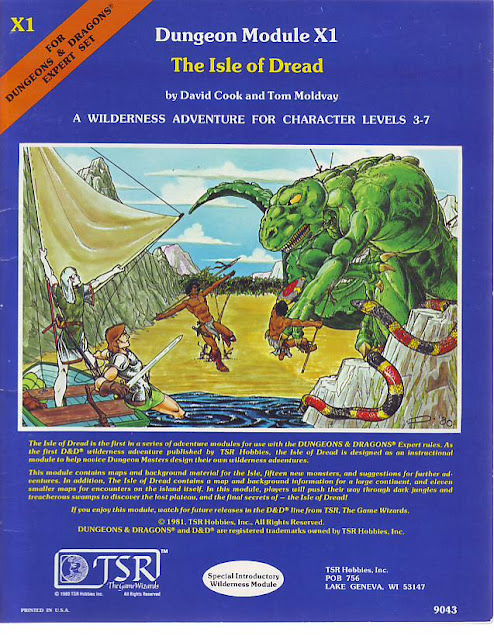 Does your dungeon need some unexpected Gnoll types or warriors?!  The Bestiary of Cryptofauna has you covered and then some. Yes all of the monsters have stats & artwork with a leaning towards the dangerous dungeon side. Overall this isn't a bad little book for the money & works nicely with many of the current & past OSR retroclone systems on the market. The advantage here is that The Bestiary of Cryptofauna can work with both Advanced Dungeons & Dragons first & second edition easily so its a snap to drag in many of the monsters from this book into a current or expanded campaign without any trouble. All in all a fine little addition to the DM's tool box! I look forward to reading & seeing more of Hannah Saunders work and design. The Bestiary of Cryptofauna makes an excellent little OSR book.