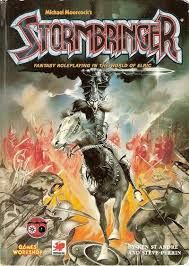 Every holiday I run a Stormbringer one shot. I kept converting everything over to Swords and Wizardry in my head.Jesus I've got six players for this event and the only thing that came to mind is BOC - Fire of Unknown Origin.Once again Lawrence Schick saves my bacon. The Quest for Tyring has begun in the middle marches! So far there are six players. I'm stone cold sober with a cup of tea sitting by me running this for the guys. The PCs are running their asses off from a chaos pack at the moment.

The planar ship "All My Sins" dropped them.Basically the PCs are going to recover the remains of the sword from the tomb of Angantyr before the Chaos Pack of the Sword Maiden herself. The sword is the last relic of power needed for the grand cycle of life to continue with the creation of a new cosm. Order has an agent trying to also recover the weapon and the PCs aren't sure who or what that agent is
Two PCs dead! Got eaten by a horde of zombie Goth warriors! The other PCs used flaming oil to burn up the horde and send their comrades to the next life.

The PCs made it back to the planar ship "All my Sins". They've battled with The Hell-Horde of Chaos and just managed to flee back to the ship when the treacherous hireling struck. Actually an agent of Goldar The  Lawful whose death at the hands of Hell-Horde of Chaos bought the group time. They're raising a toast to their fallen comrade at the Four Winds bar. The Hell Horde came from Here


This song ties the whole campaign that I run every year together. The planar ship "All My Sins" sails both time and space touching the cycle of violence from all of the wars throughout history and all of its alternatives. Warriors are taken from the various eras by the maimed captain who telepathically speaks to the PCs. These men are promised peace in Tanelorn should they complete their assignments. The ship marks the end of one cycle and the beginning of another.

Warriors move throughout the multiverse where and when they are needed. The ship is drawn to violence and points of crisis like a moth to a flame. The ship  may or may not be the body of forgotten goddess of Chaos who has been woven into this ship. All about the ship remains mysterious and lost to the mists of time.

Will the Sins sail again? A small ivory chess piece sits by a multi tiered board in the Time Center right now. A small maimed figurine of jade sits by the board. So should she sail again? Is anyone interested in a hearing about the occasional Stormbringer campaign that sails the planes?
My thanks to Eric Gross for all of the inspiration for this one!
Posted by Needles at 10:11 AM