The PCs have acquired a Phoebus Transport D63 Demeter Star Freighter ala Rifts Manhunter page. 177
The players were confronted with a small patrol group as they entered into Dynastic turf. A battle cruiser and several patrol ships appeared off of their port and demanded to see one of the NPCs aboard the ship. The players panicked and put a few ion cannon shots across the protagonists bow and then jumped to hyperspace activating their spike drive

Exploration of  The Ruins

The PCs stumbled upon a weak signal in hyperspace coming from a small planetoid in an obsucre body not far from their current position in hyperspace. Exploration revealed a set of ruins from a civilization some two million years old and Altan level technologies.
The PCs found a few canisters of nuclear fuel and a couple of giant spiders. The PCs left the place rather quickly though. They made note of the world for later exploration and exploitation.

The crew make their way into hyperspace once again for a system controlled by Allard Technologies and Electronics. The twelve world system is a couple of days travel and they pass numerous white holes in hyperspace spewing out debris. Many systems have been destroyed by planet killer nukes.
The PCs finally reach the system and it jammed with ships. They're given a vector and told to orbit a nearby world and await instructions.
The PCs were asked about several items that they might have for sale. Terraforming equipment was on the list. Nuclear fuel, weapons, medical supplies, etc. All items that one would find in short supply during a war.
The PCs docked in a nearby space station and that's when they ran into a party of these beauties. 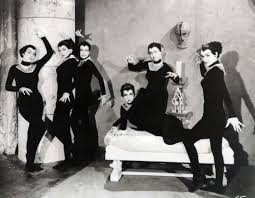 A group of six green faced feline beauties. Dressed in antique space suits and armed with a variety of shang guns. The group teleported in front and behind the party aboard the station. The catwomen demanded the return of the fuel which had been stolen by the party. The cat women went on to explain that the PCs were wanted space pirates and that as rightful bounty hunters the party was "prey"
Before the melee got to be too much a representive of Allard showed up and explained to the Cat women that the PCs were under the protection of the "Brotherhood of Space" a group of like minded space brethren(ie space pirates). The bounty was paid but several members of the Cat women didn't seem impressed. 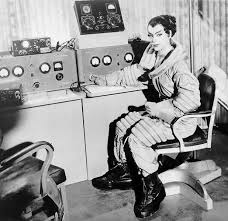 Vast fleet of pirate vessels showed up in the system allowing the PCs to leave before things got ugly. The fleet gave them ultimatum comply or be blown from the sky.
Using The Catwomen For Your Retroclone Space Opera

This ancient race of catwomen have seen it all from their vantage point on Earth's moon. They are the product of a two million year old Greek style civilization. They are at least four level psychics with the ability to teleport without error five times per day. They gain telepathic abilities as well of at least the second level in Stars Without Number. For Mutant Future they have the telepathy mutation and gain +1 on all stats in addition to +2 on Charisma. The tribes of the catwomen have a green copper based complexion to their skin that does nothing to take away from the beauty of these savage creatures.
The race has the lens power obsessed and conquering. The tribes of Catwomen have spread throughout the galaxy and a number of them serve within the Xplorers corps as well. They are not a well trusted race however and serve a deathless 12 level psychic lich queen. The various tribes also serve with distinction aboard pirate vessels throughout known space.
Once per day the feline like cat women may command fire as per the ability. They may also  find the "weak points" and cast a charmlike psychic spell over a victim. The victim must make a saving throw to avoid become a thrall of these feline beauties. The racial weapon of the tribes of catwomen is a +1 dagger made from lunar steel. 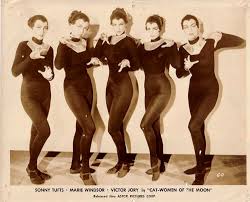 Wiki reveals the intimate details of plot of the Cat Women From The Moon Movie
An expedition to the moon encounters a race of "Cat-Women", the last eight survivors of a 2-million-year-old civilization, deep within a cave where they have managed to maintain the remnants of a breathable atmosphere that once covered the moon. The remaining air will soon be gone and they must escape if they are to survive. They plan to steal the expedition's spaceship and return to Earth.
Through the use of their telepathic ability the Cat-Women have been subliminally controlling Helen Salinger (Marie Windsor) so she can win the navigator slot on the expedition and lead the crew to their location. Once Helen and the male members of the crew arrive on the moon the Cat-Women take complete control of her mind. They are unable to control the men's minds, but they work around this obstacle with Helen's help and the use of their superior abilities and feminine wiles. "Show us their weak points," one says to Helen. "We'll take care of the rest."
Along with telepathy, the Cat-Women have the ability to transport themselves unseen from place to place within the cave. They use this ability to steal the crew's spacesuits from the mouth of the cave, where they were left.
Using Helen to smooth things over after an earlier failed attack on the crew, the Cat-Women approach the men openly. Food and drink are brought out and a party ensues. Kip (Victor Jory) is suspicious after discovering the spacesuits are missing and confronts the Cat-Women's leader Alpha (Carol Brewster), who promises to return the suits in the morning. Kip sits alone, unable to intervene while the Cat-Women exploit the "weak points" of expedition commander Laird (Sonny Tufts) and the other men.
Soon the Cat-Women have learned how to operate the spaceship and are well on their way to success. But Lambda (Susan Morrow) falls in love with crew member Doug (William Phipps) and tells him of the plot. Carrying three spacesuits, Alpha, Beta and Helen make a break for the ship. Lambda teleports ahead to delay them and is killed by Beta (Suzanne Alexander). Kip catches up and fires several shots; Alpha and Beta are killed; Helen is uninjured. The expedition escapes and begins their return to Earth.

You can watch the lunacy of the Catwomen right over here

The Atomic Rocket program was brought into effect  right after the Atomic Wars that devastated the Earth. These were very early attempts to explore the solar system and beyond. Many of these United Nations missions were lost. Only now have the details of some of these missions been revealed. Pax and many of the Precursor missions scouted beyond the solar system.
These lost space craft might find their way into the turf of games like Terminal Space, Star Ships and Spacemen and beyond. 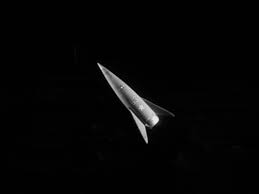 Atomic Rocket Craft
Each of the Atomic rocket craft are stripped down for propulsion, and outfitted with only the barest of necessities. These craft may have only 4 sleep pods if at all. Operating with a nuclear rocket/ion system the craft were hardy but very spartan but many of the crew do swear by them.


Crew : 5
Hit Points :20
Armor Class: 6
Drive System -
Ion  Pulse Drive \Nuclear Fuel Drive
Combination
Many of the Atomic Rocket ships came from the plant in White Sands. It is rumored that the factories that produced these ships were lost in one night by a terrible sand storm that buried the entire factory and that it is still out in the atomic wastelands still buried. Just waiting. Meanwhile the design is still used for short planetary hops even today. 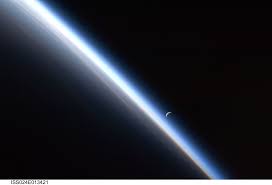